The two bigshots of South African political bigwigs were part of a cricket match nearly five decades ago.

The West Indians were expected to pull off a victory against Sussex. However, thanks to a spirited” party hosted by Thabo Mbeki and Essop Pahad, they had a below-par outing at Hove on June 13, 1966. Abhishek Mukherjee looks at the supposed after-effects of lesser-known exploits by two men who would go on to shape South African politics.

Note: The source of this somewhat obscure incident is The Extraordinary Book of SA Cricket by David O Sullivan and Kevin McCallum.

Thabo Mbeki, South Africa s second post-apartheid President, needs no introduction. For five years he had served South Africa as Deputy President before succeeding Nelson Mandela as President a post he held from 1999 to 2008. Mbeki was also the First Chairperson-in-Office of the Commonwealth of Nations from 1999 to 2002.

Essop Pahad, on the other hand, served as Parliamentary Counsellor to Mbeki from 1994 to 1999. He was Minister of Presidency from 1999 to 2008 (the same period as Mbeki s tenure as President). Mbeki and Pahad resigned from their respective positions simultaneously.

Pahad was three years senior to Mbeki. He went to University of the Witwatersrand before pursuing further studies at University of Sussex, founded in 1961. Mbeki went to the same University for his graduation in Economics and a Master s in African Studies. In 1966 both men were based in the twin city of Brighton and Hove.

The rampant West Indians had crushed England by an innings in the first Test at Old Trafford. Conrad Hunte and Garry Sobers slammed hundreds, while Lance Gibbs picked up 10 wickets as England capitulated on the third day.

Gloucestershire held the tourists to a nerve-wrecking draw at Bristol. Chasing 285 for a victory in the absence of Sobers, West Indies got the impetus from Hunte and Joe Carew. Runs were scored and wickets kept falling at regular intervals, and West Indies lost a wicket off the last ball of the match: they finished on 284 for 6, one short of a win.

Charlie Griffith was rested at Bristol, so Wes Hall got the chance to cool his heels at Hove against Sussex. The home side was a strong outfit. Led by Mansur Ali Khan Pataudi, they boasted of Jim Parks, Ken Suttle, Alan Oakman, and then an emerging star John Snow.

Pataudi was not used to be in charge of fast bowlers when he led India. Here, at Hove, he had Snow, and his star bowler responded to the call. Hunte was the only West Indian to put up a resistance of sorts, while Seymour Nurse and Basil Butcher were the only others to reach double-figures. West Indies looked comfortable at 60 for 2, but were skittled out for 123 by Snow, who finished with 7 for 29. Sobers scored a duck.

Sobers men were in no mood to relent. Leading the pack was Griffith, but the surprise of the innings turned out to be Rudolph Cohen the man who never got to play a Test due to the presence of Hall, Griffith, and Sobers.

Cohen claimed four wickets and Griffith two, reducing Sussex to 40 for 6; Pataudi had promoted himself above Peter Graves and Oakman to take on Griffith, and contributed 32 of these before edging one to Jackie Hendriks. With Griffith and Cohen seen off, Graves and Oakman added 59 for the seventh wicket; at stumps Sussex were on 122 for 7, a solitary run behind.

Politicians are known to interfere in sporting events for different reasons. Two young South African students living in Brighton [Mbeki and Pahad], who went on to become prominent politicians, were responsible for the great West Indian team that toured England in 1966 suffering a loss against Sussex. O Sullivan and McCallum.

June 12 was a Sunday, which meant there was no play. Mbeki and Pahad, along with other students, hosted a party Sunday night. O Sullivan and McCallum wrote: The liquor flowed and the party became so rowdy that the police were called. However, the police quickly realised that the revellers were the local team s opposition in a match that was in the go, apologised for the inconvenience and wisely allowed the festivities to continue.

Exactly why the British police would let a local team s opposition go scot-free is somewhat inconceivable. Crime authorities have not exactly been lenient on sportspersons across the world when it came to alcohol-induced reactions. Whatever be the case, there was no known case filed against the West Indians.

The West Indian stars arrived next day with severe hangovers. Graves scored 64, and both Tony Buss and Don Bates contributed. Sussex reached 185 after being 40 for 6 at one stage. Cohen claimed six of the wickets while Griffith had four.

But, then, the West Indians were a different breed. Alcohol and hangover were not supposed to deter their performances. However, handling Snow and Buss (who would finish with 958 First-Class wickets at 25.04) on a helpful track was another matter.

West Indies needed 62 to make Sussex bat again. The first five wickets went for 20, Buss claiming four of them. Sobers, who failed to live up to his surname (O Sullivan and McCallum), was one of them; he scored eight.

Joe Solomon and Peter Lashley hung on, adding 34, but once Snow broke the resistance West Indies crumbled. The score became 55 for 8 as the ignominy of an innings defeat loomed. Fortunately, Hendriks, Gibbs, and Cohen dragged the score to 67.

Sussex walked out with a target of six. Griffith steamed in to bowl to Suttle. When West Indies had toured in 1963, Suttle had been hit by Griffith at the same ground. He lost a lot of blood, but had carried on, scoring 40.

Almost invariably there was an encore in Griffith s first over. This time Suttle had to leave. When Oakman later asked him whether he was fine, Suttle responded in characteristic style: Oh yes, he s not as fast as he was.

Griffith also trapped Graves, and the score read 2 for 0 but Les Lenham and Parks ensured there was no more mishap.

– There was nothing wrong with the West Indians during the Wisden Trophy. The second Test at Lord s was a draw, but West Indies won the third Test at Trent Bridge and the fourth at Headingley by an innings to clinch the series. England managed a consolation victory (by an innings) at The Oval.

– With 772 runs at 103 and 20 wickets at 27, Sobers pulled off one of the greatest all-round series performances cricket has witnessed. 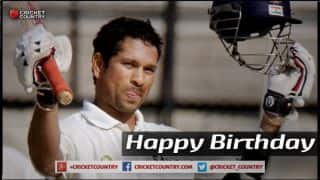 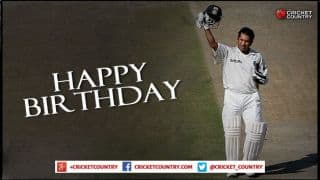 Happy Birthday Sachin Tendulkar: A legend, both on and off the cricket field