Results indicate that West Indies produced a performance so dominating that Bangladeshis were simply blown away.

West Indies rammed Bangladesh by a huge margin of 296 in the second Test to complete a dominant performance at home. Devarchit Varma wonders whether there are more good days ahead for the West Indies in future, as they head into a critical season with tours of India and South Africa lined up.

Let’s take a look at the margin of victories that the West Indies registered against Bangladesh in the recently-concluded bilateral series that included three One-Day Internationals (ODIs), one-off T20I that was washed out and two Tests:

Only T20I: Washed out

The results indicate that the West Indies produced a performance so dominating that the Bangladeshis were simply blown away. Apart from the first ODI wherein the winning margin was somewhat close — but still the home side prevailing with more than 10 overs remaining in the game — the West Indies were outstanding. It is a fact that Bangladesh have been the worst performers in the year 2014, but taking nothing away from the West Indies, who went hard in every single day in the series and started off a new chapter under the leadership of Denesh Ramdin.

West Indies’ performance in this home series would certainly raise hopes about the future as the team heads into a crucial stage. They will be touring India next month and before the all-important ICC World Cup 2015 begins in Australia and New Zealand, the West Indies will be in South Africa for a full tour comprising three Tests, five ODIs and two T20Is.

The team from the Caribbean and some of its star players have been among those who have frequently visited India. But unfortunately, compared to the overseas players who have benefitted immensely by playing in the Indian Premier League (IPL) and international cricket, it won’t be inaccurate to say that the West Indian cricketers haven’t used the advantage to their benefit.

The results too suggest this theory. West Indies had toured India in 2011-12 for a full series, and then for an impromptu series again in 2013-14 — outside the International Cricket Council’s (ICC) Future Tours Programme (FTP) — that marked the retirement of Sachin Tendulkar. What transpired in the last two series was nothing but one-sided contests, as the West Indians looked mere participants in the Test series which India won 2-0 on both the occasions.

As the Caribbean side is gear up to make another trip to India next month — for a full tour which has three Tests, five ODIs and lone T20I — it will be a valid question to ask whether the outcome of the series will be different this time. Or in fact whether the West Indies will be able to challenge India on some fronts? The West Indies have shown positive signs in the series against Bangladesh, and not only their fans, but the cricket fraternity will hope that they maintain the same level of intensity in the coming months.

There were many positives to take out from the series against Bangladesh — batsmen apart from Shivnarine Chanderpaul such as Kraigg Brathwaite, Darren Bravo, Jermaine Blackwood and even Leon Johnson producing impressive show. With the ball, Kemar Roach and Jerome Taylor were impressive but the way Sulieman Benn bowled was most encouraging. With two five-wicket hauls, there is no doubt that Benn would be a key player in India. West Indies fired on all cylinders against Bangladesh, and it will be interesting to see if they are able to maintain the same intensity against India.

There are some off-field activities going on as well. Clive Lloyd has joined the selection panel and the director of cricket, Richard Pybus has proposed changes in the domestic system. Head coach Ottis Gibson has left and the developments indicate that the West Indians want to make changes in the set up in order to revive their fortunes. Whether they are successful in turning the fortunes is something only time can tell, but if recent results are anything to go by, West Indies could be a different side on field when they take on India. 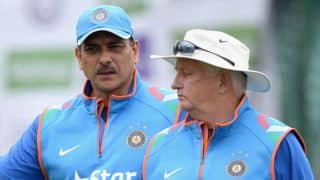