Carlos Brathwaite totally changed the course of the match with four back-to back sixes to Ben Stokes and ended the game in a fairytale way.

The final match of ICC World T20 2016 was played between England and West Indies at Eden Gardens, Kolkata. Looking at the way match ended, it can easily be termed as the best World T20 final since 2007. It started with England’s batting as they were invited to bat first by West Indies. England had quite an unsatisfactory start as they were three wickets down for just 23 runs. But from there on, Joe Root and Jos Buttler built a decent partnership of 51 runs and put the innings back on track. Further, Root managed to get to his half-century and England somehow managed a respectable total of 155. FULL CRICKET SCORECARD: England vs West Indies, ICC World T20 2016, Final at Kolkata

Like England, West Indies too started in the similar fashion as they were three wickets down for just 11 runs but then a big partnership between Marlon Samuels and Dwayne Bravo of 75 runs turned everything. But the required rate was not going down as the scoring rate was not so good. This is when Samuels started hitting in order to maintain the asking rate and then came the final over, where they needed 19 from six balls. All-rounder Carlos Brathwaite totally changed the course of the match with four back-to back sixes to Ben Stokes and ended the game in a fairytale way. West Indies won the final game with four wickets and two balls spare. With this epic thrilling final, many records were set and broken and Abhishek Kumar presents such interesting statistical highlights from the match.

3.  With an economy rate of 5.39 throughout the tournament, Samuel Badree became the most economical bowler of the tournament amongst the bowlers who have bowled 20 or more overs.

4.  With this match, Chris Gayle became the fourth West Indian cricketer to play 50 or more T20Is. Other three players from West Indies who have played 50 or more T20Is are Darren Sammy, Dwayne Bravo and Denesh Ramdin.

5.  By scoring an unbeaten 85, Samuels broke his own previous record of most runs in a World T20 final. He had scored 78 in the ICC World T20 2012 final. This is also his highest individual score in T20Is.

6.  Samuels also became the second player to have two fifties in World T20 finals. First player to do so was Sri Lanka’s Kumar Sangakkara.

7.  Jos Buttler hit three sixes during his knock of 22-ball 36. He has second-most sixes in this tournament with 12 maximums after Tamim Iqbal — who has 14 sixes in his name.

8.  With two sixes in the final game, Samuels has now most sixes in his name across all T20I tournament finals with eight sixes.

10.  Sulieman Benn’s spell of 3-0-40-0 is the third most expensive spell of three overs across all T20I tournament finals.

11.  With 54 runs in the final game, Joe Root broke the previous record of most runs by Kevin Pietersen (248 runs) from an English batsman in a World T20 tournament with 249 runs in his name.

12.  Joe Root became the third cricketer to have scored a half-century and take atleast a wicket in World T20 final. Shahid Afridi did the same in 2009 and Marlon Samuels did that in 2012.

13.  Carlos Brathwaite scored 24 runs in the final over of the game, which is the most number of runs scored in a T20I by any team while chasing in the last over the game. Previous best was of 23 runs scored by Australia in ICC World T20 2009 semi-final against Pakistan.

14.  With this final victory, West Indies became the only team to win the World T20 tournament twice. Also they became the first team to have two World Cup trophies in both One-Day Internationals and T20Is.

15. This is the first time in the history of cricket, when both women’s and men’s teams won a World Cup tournament on the same day. First West Indies women’s team won the World T20 2016 in the day and then men’s team followed later in the evening.

16.  This was the 19th instance of West Indies winning the toss in World T20 matches, which is the most by any team in this tournament across all the editions.

18.  Samuels’ fifty came in 47 balls, which was the second slowest half-century by a West Indies batsman in T20Is after Devon Smith’s fifty in 49 balls in 2007.

19.  West Indies scored 161 while chasing 156 and this is now the highest score in a World T20 final by a team and second highest across all the tournament finals in T20Is. 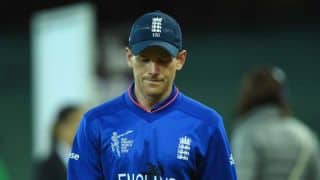