With two back-to-back spirited batting performances, the West Indies have not only made a strong statement against India in the ongoing series, but have also reinstated balance as far as domination is concerned.

With two back-to-back spirited batting performances, the West Indies have not only made a strong statement against the Indian cricket team in the ongoing series, but have also reinstated balance as far as domination is concerned. If the performances of the batsmen who have got runs in the third Test are anything to go by, application and patience are biggest of virtues, and West Indian batsmen had aplenty of that towards the end of the second session. Hosts, with their resurgence with the bat, are all set to test the depths of the Indian bowling. Full Cricket Scorecard: India vs West Indies, 3rd Test match

It certainly has been pleasing for the West Indies to have risen to the occasion and challenge one of the best Test sides in their gameplay. On the final day of their second Test at Jamaica, it was Roston Chase who led the Caribbean resurgence, which triggered it all; and in the later part of the second day’s play in this third Test at St Lucia, the West Indies openers finally came to party.

Kraigg Brathwaite has shown all signs of being a quality Test opener, as he has used his knowledge and experience of batting in home conditions pretty well, not once but twice in this series, which is not the case with the other Caribbean batsmen. Leon Johnson was unlucky to have been excluded in the first two Tests despite strong performances in the tour matches. Nevertheless, his innings on Day Three too was replete with confidence.

For India, who have a lead of 246 runs going into the third day, it will be a big challenge. Among the three West Indies batsmen who played on the second day, Darren Bravo would have returned to his hotel being the happiest, after all he put up a strong fight and remained unbeaten till stumps. So far in the series, the most talented West Indies batsman was just failing repetitively, but for him to have dropped the anchor would have been extremely pleasing. Also read: Hosts look to consolidate on crucial day

India’s problems with the ball cannot be many as of now, since it only has been a few good sessions for the West Indies with the bat in this series. However, India will be needed to have their bowling plans worked in full details, and the list also includes the backup ones in case the West Indies batsmen are hard to get out.

It has not been the case that India have bowled poorly or have not produced enough wicket-taking deliveries. The credit, in fact, goes to the Caribbean batsmen to have put their disappointments behind and start afresh with clear mind and confident approach.

However, as long as India continue to field five bowlers, somewhere they will be expected to keep dismantling oppositions on modest totals. The West Indies have just began batting well, whether they will get near the Indian total at all is something that is yet to be seen. And if they manage a lead, it will be a massive moral win for a team that has been ridiculed for almost every move they have made.

On Day Three, India did bowl well. Bhuvneshwar Kumar did not get the expected bounce but maintaining tight lines and lengths did not result in wickets. India have been hitting the opposition pretty hard with their bowling, which the West Indies have started thwarting, and this is where the Indian bowlers will have to be innovative. Also read: Does Virat Kohli’s 5-bowler policy veil India’s frailties?

The selection of Ravindra Jadeja was tad surprising on a wicket that has so far helped batsmen who have played with intent and the bowlers who have put the ball in the right areas. Maybe, the express pace of Umesh Yadav would have come in handy but India do not have the option, and they will have to devise ways to get the remaining 19 West Indian wickets in order to take a 2-0 lead in the series.

Meanwhile, England captain Alastair Cook has admitted that his team, who stand a chance to become world No. 1 for the first time since 2012, do not exactly deserve the honour. It is an honest deduction for a man who has been a part of the world-dominating English side of the past. Whether Virat Kohli’s India is deserving or not is not the question, since both these teams have many unanswered questions. But no one will reject the top rankings and India, if they aim to be No. 1, will have to make sure they end the West Indies tour with a margin of 3-0. 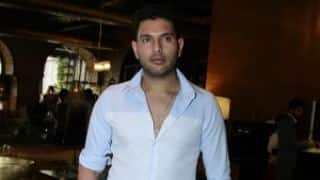