Australia face West Indies in a must win situation at Barbados in Match 8 of Tri-Nation series. Their previous match was abandoned as rain played spoilsport. The play was called off with just one over bowled. Now they will be facing hosts in Barbados. The visitors are currently on the second spot on the Points Table with two wins out of five matches and one draw. They have one bonus point from their first match where they romped over West Indies. So far both the teams have won one of the two games faced against each other in this tournament. Australia will be making a change or two in the side after the hosts exposed their weakness to spin bowling in the previous match.FULL CRICKET SCORECARD: West Indies vs Australia, 8th ODI at Barbados

Top Order: Australia suffered a meaty blow as in-form batsman David Warner was ruled out of the tournament due to injury. Usman Khawaja has been the top scorer for Australia in this tournament and his side will be banking on him to provide a sturdy start to their innings. Aaron Finch has been a little out of touch except one innings where he scored 72 where everyone failed to make an impact in the game. He can also play the spin well and might come in handy against Sunil Narine if he survives the first few overs. Their top order gets more firepower with skipper Steven Smith coming in. He is a big game player and will need to perform in a must win situation.

Middle Order: George Bailey comes in at fourth spot. He has 66 runs to his name in two innings which includes a half century. After him the middle order is a bit shaky with Glenn Maxwell going through a rough patch. He has just three runs from two innings. He was given a chance in the last game and it’s a possibility that he might play today as well. Mitchell Marsh too has had a bad run In the batting department. There is a chance that James Faulkner might come ahead of him as he expressed his desire to bat up the order. Same is the case with Mathew Wade who has struggled to play himself in and has thrown his wicket away in crunch situations.

Lower Order: Faulkner gives some depth to the lower order with his hard hitting skills. He has not lived up to his stature but he might come in handy when a few quick blows are required. Josh Hazlewood scored 11 run unbeaten in an innings which means that he might be able to keep his wicket intact while runs keep coming from the other end. Mitchell Starc and Adam Zampa are not expected to score runs down the order. Nathan Lyon too might get picked up in the side.

Zampa might be included in the side seeing West Indies’ spin woes. He has nine wickets in the tournament so far. Starc and Hazlewood too have had a good tournament and will look to pick up a few early wickets to put the hosts under pressure early on in the innings. Faulkner and Marsh have not been phenomenal and there is a chance that Lyon might replace one of them. Maxwell too will chip in with a few overs in the middle.

Arun Rawal, a reporter with CricketCountry, is a daydreamer, movie buff, and cricket fanatic. He could not play cricket, so did the next best thing, writing for it. He loves to play the flick shot over square leg, and believes Sachin Tendulkar is God. His twitter handle is @ArunRawal93) 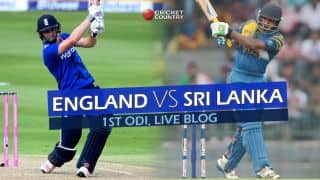