The Australian team will like to win their third game of the series to cement their place in the final.

The reigning champion in 50-over format, Australia will lock horns against hosts, West Indies in the fifth One-Day International (ODI) of the West Indies Tri-Nation series at Warner Park, St Kitts. Australia has looked their usual best in the series and their only blip came against South Africa when they lost chasing 189. On the other hand, West Indies started well by winning their first match against South Africa but lost handsomely to the mighty Aussies. With David Warner being ruled out of the remainder of the series, Steven Smith may have some problems with his Playing XI. Here is a look at Australia’s likely XI: FULL CRICKET SCORECARD: West Indies vs Australia, Tri-Nation Series, Match 5 at Basseterre

Top-order: Australia has been jolted by Warner’s injury and will be missing out on the remaining matches. In this case, Aaron Finch will open with Usman Khawaja. This will move their main batsmen up the order. Smith should come to bat at the fall of the first wicket. George Bailey will follow the skipper. The tough call will be to either play Glenn Maxwell, who has been in terrible form of late, or to play Travis Head who has been good in the middle-order. Head has been good in rotating the strike and can also play the big shots if and when required.

Middle-order: Mitchell Marsh will come at No. 6 followed by wicketkeeper, Matthew Wade. These two players will like to get a look in and spend sometime in the crease. Australia has been dependent on Warner or Finch while the others have looked off colour. In this case, the onus will be on other batsmen to take up the responsibility if they have to cement their place in the final. James Faulkner will be at No. 7 to provide the late onslaught to the innings.

Bowlers: Australia has been right on the money in bowling. Mitchell Starc will spearhead the attack along with the economical Josh Hazlewood. Both had a good outing with the white ball in their previous game defending 289. They will like to continue to hunt in pairs and rattle the inexperienced West Indies batting order. Mitchell Marsh and Faulkner will play the role of the other seamers while Adam Zampa will like to carry his good form he has picked up in the tri-series. West Indies are not great while playing spin and Zampa will like to run through their line-up.

Australia have a settled team which is inching towards the final. An unlikely injury to Warner may have spoiled their team composition a bit but will still start as favourites against the hosts. 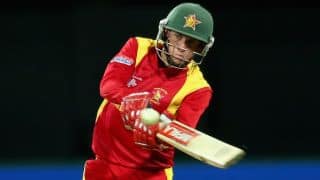