The Day three of the First Test between West Indies and England at Antigua had some exciting moments for both sides. England continue to remain the favourites though. Rishad DSouza takes you through highlights of Day’s play.

Jermaine Blackwood gets lucky again:  Jermaine Blackwood was incredibly lucky on Day 2; he nicked to slip off a no ball and miscued a couple of drives just short or over the fielder at mid off. Luck did not dry up for him on Day 3 either. James Tredwell dropped him on 43 off Ben Stokes‘ bowling. Tredwell made a brilliant diving attempt to get his hands wrapped round the cherry but the impact of ground on elbow made the ball bump out.  West Indies vs England, 1st Test: Day 3 Report

Blackwood makes it count: After lady luck smiled bright over Blackwood, he decided to make it count. He played with resilience even when the going was tough and stayed on until the end off the innings, ending with an unbeaten 112, while his team folded for 295. Had it not been for him making the missed chances count, West Indies would have conceded a much bigger first innings lead. Scorecard: West Indies vs England, 1st Test at Antigua

James Tredwell triggers and leads West Indian lower-order collapse: Tredwell may have dropped a tough chance offered by Blackwood earlier on. But he went on to make up for that fault adequately by dismissing Chanderpaul. He then snared Jason Holder and Kemar Roach for cheap scores of 16 and five respectively. He didn’t allow the West Indians to settle into any kind of partnership.

Jerome Taylor’s inspired spell: Jerome Taylor bowled beautifully early on. There was swing on offer and Taylor made the ball dance to his tune and caused a great deal of trouble for the opening pair of Alastair Cook and Jonathan Trott. Eventually, he reaped his rewards as he dismissed Trott for four runs while Cook managed 11 against some menacing bowling. Photo Gallery: West Indies vs England, 1st Test at Antigua

Gary Ballance and Joe Root’s partnership: After the wickets of Cook and Trott, Ian Bell fell soon after by way of run out. At this stage England were quite precariously placed, and another wicket at that stage could put West Indies right back in the contest. However, Ballance and Root ensured they were no further casualties in the day for England.

Not only did they preserve their wickets well, but also scored at an appreciable rate. Root found the boundary with relevant ease. The batsmen will look to up the scoring on Day 4 to give the English bowlers the best chance to dismiss West Indies. 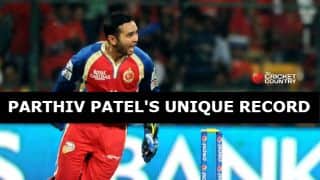 IPL: Parthiv Patel and others playing for most franchises