England, who managed a win by 4 wickets and seal the series against West Indies had its fair share of interesting highlights.

West Indies took on their foes England in the second One-Day International (ODI) at Sir Vivian Richards Stadium in Antigua. Already trailing the three-match series 1-0, West Indies skipper Jason Holder elected to bat first. Batting first the hosts managed to register 225 runs on the board, thanks to some fight put up by Kraigg Brathwaite and Jason Mohammed. In reply, England, too, caused a mini collapse, only to be saved by their Test skipper Joe Root and Chris Woakes. England, in the end, managed a win by 4 wickets and seal the series against West Indies. The second ODI had its fair share of interesting highlights along the ways. Let us dwell in to some of the more exciting moments from the game. Full Cricket Scorecard: West Indies vs England, 2nd ODI at Antigua

Kraigg Brathwaite s ODI-unlike 42: Opening the innings on a slow and sluggish pitch is not easy. Kraigg Brathwaite was expected to do just the opposite of the nature of the pitch. Before even getting in the groove, he saw his partners fall like ninepin, only making his stay in middle more valuable. Kraigg weathered English storm and stitched crucial runs with Jason Mohammed and Shai Hope.

However, Kraigg was lucky to survive on 1 and 40.

Jason Mohammed s sturdy fifty: Coming in at 46 for 3, Mohammed was staring down the barrel. Unfazed by the situation, Mohammed absorbed all the pressure and ensured England does not instigate a collapse. Mohammed, along with Kraigg Brathwaite, scored a 72-run stand. Mohammed chanced his luck against the spinners. His knock lasted only two balls after reached his second fifty.

Liam Plunkett s 3-for: After initial stumble, West Indies side gained momentum and the pair of Jason Mohammed and Jonathan Carter accumulated 72 runs for themselves. It was just before the final 15 overs that Plunkett was called in, and he proved to be the game-changer. Plunkett first picked up the dangerous Carter, then removed the well-set Mohammed.

Jason Roy s thundering half-century: Understanding how important it is for batsmen to make good use of a dropped chance, Jason Roy ensured he punished the home side. Roy did not look back and whipped up a whirlwind full of runs for himself. It, however, got his team off to a good start.

Roy lambasted his way to a well deserved half-century that came in just 45 balls, which had seven blistering fours and a six.

Ashley Nurse s wizardry: England were well cruising before Ashley Nurse came in to the attack and injected some life into the game. Nurse started the visitors’ downfall, picking two wickets in quick time. Nurse snapped up the crucial scalp of Eoin Morgan for 7, and then nabbed Moeen Ali for 3. On both occasions it was his conventional off-spin that came into play and not an array of deliveries. Nurse, who earlier got the wicket of Jason Roy, was looking to take the match away from England s gasp. He ended with figures of 3 for 30.

Joe Root s hardwearing knock: With wickets tumbling from one end, it was the cricketing acumen of Joe Root that prevailed and got England past the winning line. Slow to start his innings, Root maintained a steady run-rate all throughout. Unmoved by the collapse, Root showed trust in Chris Woakes and ensured both players got equal strike, thus guaranteeing the scoreboard kept ticking.

Root kept rotating the strike, at the same time making sure he does not take the aerial route. He eventually remained not out on 90. 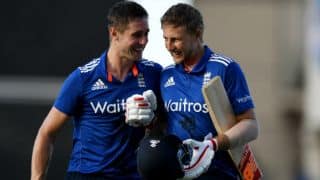