Eoin Morgan and his troops trounced over a hapless looking Jason Holder-led side in the third and final ODI by a massive 186 runs deficit.

England finally achieved their much-awaited dream of whitewashing West Indies 3-0; first time since 1990. Eoin Morgan and his troops trounced over a hapless looking Jason Holder-led side in the third and final One-Day International (ODI) by a massive 186 runs deficit. England, batting first, seemed unfazed by the moment as Joe Root and Alex Hales panned West Indies bowlers all over the park en-route their respective hundreds. Set 329 runs to chase down, West Indies showed no grit or determination to even put up a fight against the likes of Chris Woakes and Liam Plunkett, who excelled with the ball. It was only an unwavering Jonathan Carter, who stared down the lion in the eyes and managed to salvage some pride for his side. FULL Cricket Scorecard: West Indies vs England, 3rd ODI at Barbados

Joe Root s yin-yang 100: England s star from the last match, Root had quite a challenging time in the middle starting his innings. Holder, in particular, caused him a bit of trouble. Batting on 1, Root was dropped by Evin Lewis at square leg after he mistimed his shot. Soon after, Root was again given a life at 12. Holder managed a thick outside edge of Root, which was spilled by Ashley Nurse at gully. Root eventually completed his ninth ODI ton costing West Indies 87 runs in the process.

Alex Hales onslaught: After missing out on most of the English winter season, Hales, after proving his fitness to the selectors, came back in the playing XI. Replacing Sam Billings, Hales made a cautious start to his innings. After the fall of first wicket, Hales along with Root, resurrected the English innings.

Soon after settling in, Hales smacked Devendra Bishoo unto the Griffith stand s roof for a (94 m) six, followed by a six straight down the ground. Hales reached his fifty in 52-balls. Hales did not stop there and went past his fifth ODI hundred in just 99-balls. His innings finally came to an end on 110.

Alzarri Joseph s 4-for: The only shining light in the West Indies bowling unit was Joseph. Coming in for the injured Shannon Gabriel, Joseph exhibited raw pace in the middle getting the wicket of Jason Roy early into his spell. Joseph made a splendid comeback in the death overs when England batsmen were running away with the match.

Joseph got the wickets of Hales, Root and Moeen Ali to gain himself a well-deserved 4-for. Even though he went for plenty, his pace did not decline and he continued bowling probing lines, which was encouraging to see.

WI s horrific start: Chasing 329 runs is never an easy ask, and West Indies were asked to do just that. Openers Kieran Powell and Lewis were given instructions to bludgeon the English bowlers out of the park. Powell, who started his innings with a six, also induced a top-order collapse. Powell s reckless dismissal in the third ball of the first over followed suit as Lewis and Kraigg Brathwaite too perished in a span of three overs.

Liam Plunkett s dream run: Plunkett, already leading the pack of highest wicket-takers in the series, continued his dream run in the third ODI as well. Plunkett sustained a probing line to the batsmen on a batting-friendly pitch that saw him pick two crucial wickets for his side. A peach of delivery that nipped minuscule into the batsman to rattle the off stump cleaned Jason Mohammed, who had been in good touch with bat.

Plunkett s wicket of Jason Holder was almost similar, the ball took an inside edged off the top half of the bat from a good length spot and straight into the pouching hands of wicketkeeper. Eoin Morgan and Co. complete 3-0 clean sweep over West Indies

Plunkett also claimed Shai Hope s wicket, which was quite the fault of the batsman than his brilliance.

Jonathan Carter s staunch 46: Amidst all the tumbling of wickets for West Indies, only one man stood in front and led-charge, Carter. Known for his tenacity and ability to absorb pressure, Carter came good and provided much need saving grace for his side. Carter came in at 45 for 5, and guided his team to respectability finally departing on 113.

Carter batted with grit in the middle, not afraid to take the aerial route when required. His stay provided confidence to likes of Bishoo and Carlos Brathwaite, who stood in alliance for the final few wickets. Carter missed out on his half-century by just 4 runs, but demonstrated sturdiness during all his 46 runs. 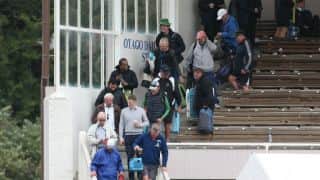 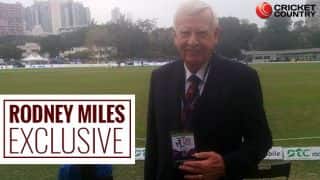 Rodney Miles, CHK President: Progress Hong Kong have made over the years has been tremendous