The fourth Day of the first Test between West Indies and England was a day for the batsmen. Bowlers found little assistance as the batsmen made merry. Rishad DSouza brings you the highlights from the day that saw batsmen dominate.

Gary Ballance‘s hundred: Gary Ballance had a poor showing in the ICC Cricket World Cup 2015 and was dismissed cheaply in the first innings in this game. However, he fought resiliently on Day Three to score an unbeaten 44. Coming in to bat on Day Four, the left hander appeared to be a lot more relaxed and comfortable. He was assisted by solid contributions from other batsmen but he headlined the show for England in their second innings. READ: West Indies vs England, Day 4 Report

Jos Buttler‘s quick-fire fifty: England, in bid to win the Test, would have been looking to declare as quickly as possible. Buttler enabled that option for Alastair Cook by scoring an unbeaten 59 off 56 balls, taking England to 333 for seven, with a lead off 438. He didn’t attempt to cream the bowlers but played smart, picking singles and dominating the bad balls. West Indies vs England, 1st Test: Full  Scorecard

Alastair Cook‘s unusually brave captaincy: Cook has come under fire many a time of being a lousy captain who lets the game drift away. But he was a different man on Day Four of this Test. He declared a few overs before tea to try and enforce a quick wicket and it worked as Stuart Broad winkled Kraigg Brathwaite. When things started to look increasingly tough for his bowlers, he continued to encourage them with aggressive fields and when still nothing came of it, he brought on Joe Root to roll his arm. The decision worked it’s charm as Root dismissed a well-set Darren Bravo in just his seventh ball of the spell. If he continues to lead that way, England will benefit not only in this match but also in the approaching home season. Blog: West Indies vs England 1st Test Day 4

Devon Smith overcomes poor form to hit fifty: Devon Smith would have been keenly looking for a big score, as he place in the side could be on tenterhooks after Chris Gayle returns to the side. He has had a bad run in Test whites but played beautifully today, despite the immense pressure of playing out about one and a half days. He batted sensibly and unlike Bravo, did not throw his wicket away. He went on to score a fifty and took West Indies to 98 for two at stumps of which he contributed 59* runs. For West Indies to save the match, he will have to stay a lot longer on Day Five. In Photos: West Indies vs England 2015 1st Test at Antigua 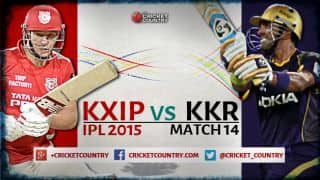