West Indies romped home to another victory and became the first team from Group 1 to seal a spot in the semi-finals of T20 World Cup 2016.

How often have we heard commentators emphasise the merit in delivering yorkers at the far end of an innings? While greats like Wasim Akram, who mastered the delivery, concede that it is tough to bowl a yorker with a slippery new ball, others like Shane Bond and Lasith Malinga managed that too. In a frenetic format like T20, where the entire game can be treated like the final remnants of an innings, the yorker is an invaluable weapon to possess, especially when endeavouring to limit the batsman to not more than a boundary. Citing the example of South Africa, Suraj Choudhari sheds light on the diminishing art of executing yorkers and how that might have cost them a semi-final spot in the World T20 2016. Full Cricket Scorecard: West Indies vs South Africa, T20 World Cup 2016 at Nagpur

It was the semi-final of the 2015 ICC cricket World Cup, yet another moment for South Africa. The match was evenly poised, even after Daniel Vettori edged a wide yorker for four, down to third man. With edges of bats as thick as tree trunks, combined with short boundaries like the one in front and behind the wicket at Eden Park Auckland, the bowler needs a little luck to have faith in the yorker. Dale Steyn was seemingly destroyed. Yet, had he persisted with the tactic to Grant Elliott, who sent the penultimate ball of the innings — a length ball, into orbit, he may have at least succeeded in blocking the six hitting option for the batsman, thereby keeping the match alive.

Yesterday, West Indies romped home to another victory and became the first team from Group 1 to seal a spot in the semi-finals. South Africa succumbed to another gut-wrenching defeat, and the reason behind it was not the brilliance of the West Indian batsmen but rather, South Africa’s own mistakes.

Although South Africa recovered well to post 122 on the board after slumping to 47 for 5 inside 9 overs, defending 123 was always going to require unwavering discipline with the ball. And like previous faux pas’, South Africa did most things right, except tripping over their own leg, a whisker from the finish line. READ: South Africa sorely missed Dale Steyn in T20 World Cup 2016 defeat to West Indies

Kagiso Rabada bowled exceptionally well to get rid of Chris Gayle early in the innings and their bowlers ensured that the game wasn’t lost in a hurry.  By the end of 16th over, West Indies were reasonably placed at 99 for four. Then, Imran Tahir turned the game on its head with two colossal blows, in as many deliveries. The danger of Andre Russel and Darren Sammy had thus been abated. The ball was in South Africa’s court now. Their advantage was further consolidated by David Weise, who bowled a measly over, which left West Indies with 20 runs to get from a dozen deliveries.

Chris Morris was entrusted with the responsibility of bowling the penultimate over, which cost him ten even before he completed it, with two balls remaining. There were two boundary balls, both short in length, one width to boot. At the crease were Marlon Samuels and Carlos Brathwaite, both conventional hard hitters of the ball and hardly ones to manufacture cute dab shots, behind the wicket or improvise. It is no secret that they rely on muscle power and do not possess the versatility of an AB de Villiers or a Jos Buttler, but apparently South Africa were oblivious. It was as though no thought had been given to the strengths and weaknesses of the batsmen at the crease. It felt as though Morris was in bowling machine mode.

Rabada, their designated death bowler, had nine runs to defend in the final over. His first ball was a slower one on a length, which should have sailed into the president’s box, but Brathwaite missed.

Perhaps it was double bluff, or part of South Africa’s previously unsuccessful strategy, but Rabada attempted another length ball, with contrasting results — a massive six over deep mid-wicket, as memories from a year ago were stoked. The consistent length bowling to hitters eyeing the mid-wicket fence, even with a large outfield, was a move fraught with danger. It was further bewildering when you consider that Rabada possesses a lethal yorker. The equation mirrored the one at Auckland, and all South Africa had to do was eliminate the six option, and they might have had a better chance of making it through to the semi-finals. 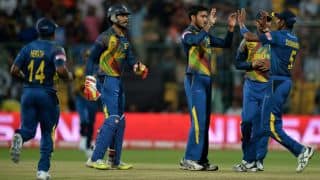