Grace scored 308 runs from 10 innings in seven Tests at an average of 30.80 against Spofforth.

WG Grace ruled the cricket world with the bat. Fred Spofforth did so with the ball. One played for England the other for Australia. The rivalry was bound to be legendary. But were the encounters one-sided? Arunabha Sengupta looks at the numbers to find whether or not the Demon had the edge on The Father of Cricket.

Not even GRACE, of matchless skill

(No worthier in the land),

The Demon s onslaughts could resist,

By lightning smit, as falls the oak,

The wickets fell beneath the stroke!

Thus ran the verse published by Punch after the heart-stopping Oval Test of 1882. After setting a target of 85, Australia won by seven runs, giving rise to the tradition of the Ashes.

As England walked out to get the paltry total, Fred Spofforth captured seven for 44 to bowl them out for 77. WG Grace scored 32 in that second innings, and was caught off Harry Boyle. So, it was not really Spofforth s cunning that dislodged the Father of Cricket in that seminal innings. However in the first innings the great man had been castled by the Australian ace.

The rivalry was bound to be committed to cricketing folklore. If Grace with his gigantic frame and a beard harking from the Old Testament strode upon the cricketing universe as the powerful Almighty, Spofforth was as feared with the ball; but the diabolical guile of his deliveries and distinguishing physical traits characterised him as The Demon.

The question that arises is did the Demon have Grace s number? Over the course of a decade of showdowns, was the great champion reduced to mortal levels by the devilish guile of Spofforth?

During the Australian tour of Grace s 1873-74 MCC side, that Spofforth represented the New South Wales XVIII against the tourists and tasted moderate success with figures of 2 for 16. He did not get the great man s wicket, but WG was not that successful either. The two innings got him scores of 7 and 12.

After the match Grace commented that Spofforth was a promising youngster and a very fair bowler, who was a long, thin fellow standing in the deep field and throwing in terribly hard.

There is a quaint story of WG at the nets in Melbourne. Spofforth recounted that he had supposedly been one of the many youngsters bowling at him. I stood at six feet three inches and weighed ten stone six, but I could bowl faster than any man in the world. WG was at the nets and I lolled up two or three balls in a funny slow way Suddenly I sent down one of my very fastest. He lifted his bat half up his characteristic way but down went his off stump. And he called out in his quick fashion, when not liking anything, Where did that come from? Who bowled that? But I slipped away, having done my job.

Charming as the story is, it is most certainly a figment of Spofforth s imagination. There is no record of Spofforth travelling to Melbourne during that period. His brother and he were on a voyage from Sydney to Hobart at the time the incident was supposed to have taken place.

Grace and Spofforth met across the 22 yards in First-Class cricket only in 1878, during the course of an extraordinary game. In a phenomenally low scoring match at Lord s the Australians bowled the MCC out for 32 and 19, Spofforth getting 10 wickets in the match. In the second innings he bowled the good doctor for a duck. It remains a quandary why the game has never been accorded Test status. But, it did prove to the proud English officials in their cricketing ivory tower that the colonies were as good at the game.

It had further consequences. It is rumoured that WG himself had become weary of the lack of competition on the cricket field. He had ruled the English batting tables like no man has ever done, sans Don Bradman many years later. For more than a decade no one had been half as good. His study of medicine, and later profession as a physician, were taking more and more precedence over cricket. If Spofforth had not arrived at that moment as a new challenge which refused to be overcome, the huge career could well have been cut short in its prime.

WG played on, and the two greats kept meeting on the field.

And there is reason enough to say that the greatest batsman of his times did not quite master the supreme bowler of the day.

Let us look at the numbers.

WG made his debut at The Oval in 1880, and scored 152. That was the first Test ever played on English soil. The caveat was that in the earlier tour game Spofforth had broken his finger while batting and hence missed the Test.

They met in the Test arena for the first time at The Oval in 1882, for the match that created the legend of the Ashes. And Grace got four and 32, Spofforth 14 wickets.

In all, Grace s scores against Spofforth in Tests read 308 runs from 10 innings in seven Tests at an average of 30.80. This is not much different from his numbers in Tests that did not feature Spofforth. He scored 790 runs at 32.91 in 26 innings from 15 Tests when the Demon did not play.

However, these numbers are deceptive because of the low sample size.

If we look closer, Grace managed one hundred and 5 fifties in the 26 innings without Spofforth glaring at him with the ball.

When Spofforth bowled, it was a different story. After struggling for 9 innings, scoring 138 at 15.33, he scored 170 in the final showdown against the Demon again at The Oval in 1886. That was the penultimate Test ever played by Spofforth, and instead of the devilish new ball bowler he came on as third change. He was past his best, and yet managed four for 65 from 30.1 four-ball overs.

Spofforth dismissed Grace only three times in Tests, but the great man was never quite at ease when he was there to bowl. The sequence of runs Grace scored against a bowling side with Spofforth ran: 4, 32, 8, 31, 14, 19, 8, 4 and 18 before that 170 balanced things out.

*numbers against Spofforth skewed by one innings of 170.

Further detailed evidence is discovered once one looks at the First-Class matches.

In all Grace and Spofforth faced off in 34 matches, two of them not deemed First-Class. In all their encounters Grace scored 1,312 runs at 25.72.

Let us ignore the seven and 12 he scored for MCC against New South Wales XVIII in 1873-74. Also, let us ignore the duck for Gloucestershire against the Australians before being bowled by Spofforth in the fill-up match in 1878 . Let us only consider the First-Class matches.

Spofforth dismissed Grace on 20 occasions in all forms of cricket, 19 times in First-Class matches.

When we look at the other side of the picture, Spofforth s figures do not undergo much deviation due to the presence of Grace. In Tests his average in fact gets better when Grace faces him hitching up from 19.28 without Grace to 17.21 with Grace.

However, the deviation in Grace s First Class numbers is too large to be explained away so easily.

It is perhaps fair to say that the champion batsman never quite mastered the greatest of bowlers. 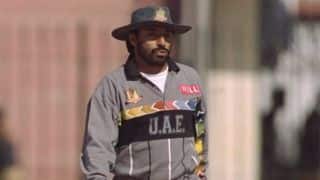