At the age of 37 and with back-to-back poor series in England and Australia behind him, every cricket follower knew it was a matter of time before the career of VVS Laxman came to the inevitable end. 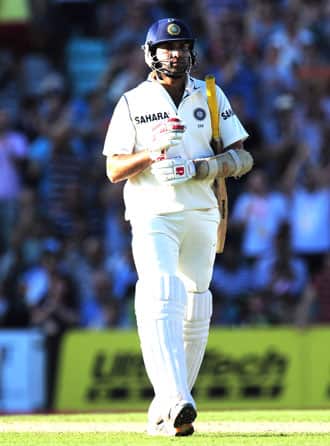 The prognosis was that not much time was left. But there was time and the protagonist, aware of the inevitable end, was planning on how to effectively use the time ahead. Given this background, the news of the protagonist calling it a day and ending his life prematurely, even if it was just a short life span ahead, comes as a depressing shocker.

At the age of 37 and with back-to-back poor series in England and Australia behind him, every cricket follower knew it was a matter of time before the career of VVS Laxman came to the inevitable end.  The man took upon himself to be at the National Cricket Academy (NCA), Bangalore for a fitness training program; played in the local league at Hyderabad, and also represented the team in the recent Safi Darashah Trophy that was conducted by the KSCA.  He had also been included in the squad for the two Test series against the visiting New Zealand side. With just five days to go for the 1st Test at Hyderabad, Laxman’s retirement came like a bolt from the blue.

At the press conference to announce his retirement, Laxman spoke of an inner voice over the last four days that made him take the decision, and said he had a difficult time convincing his family and the BCCI to accept his decision. He will probably have more difficulty convincing his true fans to accept that this was indeed the true reason for his calling it a day.

Here was a man without a blemish on his character all through his career, save for the ridiculous accusation of having used Vaseline on his bat by former England Captain Michael Vaughan. The man from a solid middle-class background was someone who carried himself with such dignity and poise that another England captain Nasser Hussain openly stated, whilst doing commentary duty, that during his time the instructions to his team was very clear that there was to be no sledging where Laxman was at the batting crease. He was probably one of those rare players who perhaps had no enemy in the cricketing fraternity, whether of the official variety or those playing the game, aside perhaps from that arising out of professional rivalry or jealousy.

Laxman has been a highly responsible and balanced person who always had the interests of the team at heart. For him to take a decision of this manner AFTER having been selected to represent the country for the series is difficult to digest.  Some fingers are pointed at the Selection Committee and their alleged ‘treatment’ (read as ‘we are selecting you now, retire after the series’) that forced the decision.  It is very unlikely for the Selection Committee to have forced any deals for they would not have borne much or any blame had they dropped Laxman totally out of the squad upfront.  His age and the two recent unsuccessful series would have come as pretty good reasons to drop him.  And if Laxman felt aggrieved or hurt by the alleged deal, he need not have waited from August 10,2012 when the selection committee met, until August 18,  2012 to announce his retirement. On the same argument it is very unlikely that there was any diktat from the BCCI either that could have forced his decision. For a man who had prepared diligently for the New Zealand series over several weeks and partook in local games to have suddenly found an inner voice that led to his decision is something that is very difficult to accept.

What then had led to the decision? There were newspaper reports on the morning of the day of his retirement announcement that the decision was expected and a fitting finale would be for Hyderabad, his home town, to be the venue of his last Test. Did Laxman seriously think he was helping the country by his last minute decision to quit and did he seriously think one or two more Test for the new aspirants would be a huge plus for the future?

Sanjay Manjrekar was scathing in his criticism of Laxman, but is quite unlikely that modern cricketers are moved to a major decision over what they read in the print or visual media. If it was not the selection committee or the BCCI or the former cricketers’ criticism, what inner voice pushed a man who was diligently preparing for a series where he had been selected to suddenly make way for young talent? Was it someone very close who spoke something that the genial man couldn’t digest or accept? Some form of humiliation that made him take such a drastic and last minute decision?

The only solace for his fans would now be seeing him turn out in the domestic games for Hyderabad. Which means the man’s passion and hunger for the game is still there. Which makes it that much more difficult to accept that the inner voice forced him to make way for youngsters.

There will probably be no cricketing association in a commercial sense for Laxman – not as a commentator or expert or a writer or perhaps even as an administrator. And for someone who held no major records from his willow, he surely will hold forever the record of being the first Test cricketer to have announced his retirement well over a week after he had been chosen to play in the country’s squad.

The real reason could remain a mystery, but the fact is: VVS Laxman is OUT – RETIRED HURT!

Why cricket may never get to see another VVS again