Captain MS Dhoni is making the right noises. He said that there is hardly any off-spinner who could hit the rib cage area of the batsmen. 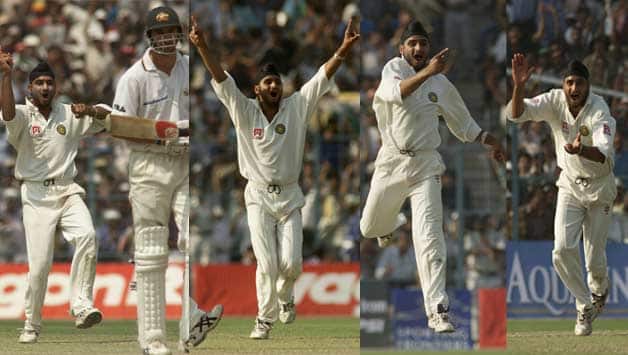 Harbhajan Singh has to bring back the enthusiasm, exuberance and brashness that he had as an 18-year-old and enjoy his cricket. He should shed his negative mindset and start attacking the batsmen © Getty Images

India captain MS Dhoni is making the right noises. He said that there is hardly any off-spinner who could hit the rib-cage area of the batsmen.

Harbhajan Singh responded to that statement: “Even I have not seen anyone hitting the rib cage. But I would like to bowl like that if I get to bowl on a good spinning track”.

This reaction, I am sure, is not what the captain would have anticipated or expected. Dhoni should realise that such indirect messages would work with bowlers who think and act. A smart cricketer will take such comments as constructive suggestions, a cue from his captain, work on his own and come up to his skipper’s expectations. But there are others who will not understand such indirect messages; it has to be drilled into their head and ensured that it’s implemented in the nets.

I first saw Harbhajan Singh in 1997 when a Sanjay Manjrekar-led Mumbai team played the Wills Trophy at Jalandhar. Young and wiry, Harbhajan bowled with a nice high-arm action to the Mumbai batsmen. He was both enthusiastic and confident and troubled even Vinod Kambli, one of the finest players of off-spin bowling. Harbhajan had the loop and the bounce and he wasn’t afraid to toss the ball up, repeatedly challenging Kambli.

Sanjay and I were enjoying Kambli getting ragged by Bhajji. I told Sanjay, “If this bowler plays club and office cricket in Mumbai, he would mature into a fine Test cricketer in two year’s time. Sanjay, who was equally impressed with Bhajji, agreed with me. I had a chat with Bhajji after practice and suggested some correction to his front arm action and the importance of it to become an effective bowler.

I also spoke to the management of my then employers, Rashtriya Chemicals & Fertilizers, who were known for encouraging young talent. They agreed to recruit Harbhajan in their team. When Navjot Sidhu came to know of my plans, he selected Bhajji in the Punjab Ranji team. Bhajji responded by picking up wickets and soon got selected for the North Zone team to play the Duleep Trophy. He performed well and in year’s time, he played for India.

Bhajji’s mental makeup during that time was aggressive. And that reflected in his bowling. He was not scared of being hit, and would challenge the best with his flight. He would impart handsome revolutions while tossing the ball, the hallmark of quality spinner. That made the ball dip and bounce, which troubled the best of batsmen world over. He added the ‘Doosra’ to his repertoire, and his ‘Pehla’ become more effective and deceptive in tormenting batsmen. Soon, his wicket tally soared and surpassed EAS Prasanna’s — the legendry Indian off-spinner — haul of wickets.

When purists of the game and the International Cricket Council (ICC) questioned the legality of Harbhajan’s action while bowling the ‘Doosra’, his effectiveness as a bowler deteriorated. Adding to his woes was the fact that he did not learn to bowl the floater and other skills in an off-spinner’s arsenal to outthink batsmen.

The ICC should either declare chucking a legitimate delivery or, if it’s serious about getting rid of illegitimate bowling action, should ask all spinners to bowl with short sleeves. That would expose the angle of the elbow to the cameras and the viewers. TV cameras should show a close-up of the bowling-arm action, which will thwart the designs of chuckers. I’m certain once this is implemented, many bowlers will become half the bowler they are now as they wouldn’t like to get exposed doing what they did wearing full sleeves. I am of the view that by allowing chuckers to get away, the game is unfair to those bowlers who have a clean action.

One-Day cricket and the T20 version, though lucrative, are forcing the bowlers to think defensively to protect their reputation, especially when they see a good ball being hit out of the park by an ordinary batsman. Bhajji, too, has fallen prey to such negative thinking in an attempt to stem the flow of runs, instead of foxing the batsmen with guile. He is persistently bowling flatter and quicker through the air and hoping for the batsman to make mistakes and get out — bad habits which have ingrained deep into his psyche and make it difficult for him to adapt to bowling in the longer version of the game. With a defensive mindset, wickets elude him and with it, his exuberance is fading away. It has affected his confidence to impart on the ball the kind of revolution in the air, which was once his strength, he gave earlier. It also seems that he is worrying more to protect his reputation and ego of a bowler who has picked up 400-plus wickets from 98 Test matches and has been a match winner. He has to shift his focus from past achievements to face the present challenges, without worrying about the future. Focusing on the process and practicing to outthink the English batsmen would bring him back the old glory that he has been yearning for.

With the kind of fantastic match-winning performances behind him, all he has got to do is bring back the enthusiasm, exuberance and brashness that he had as an 18-year-old that with not a single Test wicket to his name.

He should go back to his old ways when he used to act first and think later, with a nothing-to- lose-everything-to-gain attitude. Unlike the great Bishan Singh Bedi, Harbhajan wears a black ‘Patka’; cricket need characters to make it colorful, and Bhajji is certainly one of those rare characters in this regard. Bhajji should go out with a positive mind and attack the batsmen. He has to enjoy the contest and his cricket. If he does that, it will be a joy to watch him all over again. If he does that, expect the Englishmen dance to some sizzling Punjabi numbers! Yes, Singh has it in him to be King again!