Despite his immense batting talents, Virat Kohli was still, somewhat unfairly, referred to as “that Under-19 World Cup-winning captain”.

June 24, 2009. Years before he became a superstar with bat, Virat Kohli played a blinder for Mohun Bagan AC, scoring 184 in 121 balls to help them lift the P Sen Memorial Trophy in a scorching Kolkata day. Abhishek Mukherjee re-lives a day of relentless, brutal strokeplay.

Back in 2009 he was more Kohli than Virat. People did not affectionately address the boy, just past his teens, by his first name. Nobody knew that they called him Chiku at home. Despite his immense batting talents, he was still, somewhat unfairly, referred to as “that Under-19 World Cup-winning captain.”

It did not matter to the Indian cricket fan that he was one of the initial acquisitions of Royal Challengers Bangalore, and had a decent outing with them. His excellent domestic and Under-19 records won 5 ODI caps in Sri Lanka. Playing as opener, Kohli scored 159 runs at 31.80 with five scores between 12 and 54, looking comfortable every time before he threw it away. The talent was visible; he simply could not convert them.

But that was almost a year back. Not a part of the Indian team anymore, Kohli played for India A, Delhi, and Royal Challengers Bangalore, and scored an excellent hundred for Indian Board President’s XI against the touring Australians, but the Indian recall remained elusive.

To be fair to the selectors, with Sachin Tendulkar, Rahul Dravid, and VVS Laxman in the middle-order and several seniors in contention for the vacant space left by Sourav Ganguly, young Kohli was never in contention. With MS Dhoni, Yuvraj Singh, and Suresh Raina, the ODI middle-order was packed as well.

Indeed, at this stage of his career Kohli was far away from stardom. Thus, when he was invited to play the prestigious P Sen Trophy of 2009, he did not think twice. Apart from local superstars (Ganguly included), the tournament had in the past attracted the likes of Tendulkar, Dhoni, and even Chaminda Vaas; Kohli was about to add his name to an illustrious list.

Mohun Bagan AC, who made him the offer, had Wriddhiman Saha in their line-up, and had also acquired Manish Pandey. He failed in the earlier match, but Mohun Bagan did not dream of dropping their star batsman for the final. After winning the JC Mukherjee Trophy earlier that year, they were keen to win the other big prize as well.

Their opposition, Town Club, was no mean side, and boasted of Saurabh Tiwary and Ishank Jaggi. They also boasted of a fast bowler from Uttar Pradesh who had made quite a name for himself: Mohammed Shami, who went by the name Shami Ahmed in those days.

Town Club bowled first, and to their credit, removed Pandey — who had become the first Indian to score an IPL hundred earlier that year — off the second ball of the match. Determined to make a mark after a poor show in the semi-final, Kohli walked out to join Saha, and grabbed the Town Club attack by the collar.

Seldom has Eden Gardens witnessed a knock of such exuberance. It was a smouldering June day in Kolkata, but that had no impact on Kohli, for he was out there to prove a point. It was not the most glamorous of occasions, with a handful of spectators scattered around the stands of one of the largest cricket grounds in the world. But it did not matter.

Saha was yet to make his Test debut, but he was mature enough to realise his role. An aggressive batsman by nature, he was happy to play the ideal foil, giving the strike to Kohli whenever possible. By the time Saha fell for 44, Mohun Bagan had already piled up a formidable 159 in 125 balls.

As Kohli continued with his remarkable display of sustained aggression, fielders ran for cover, and bowlers looked around for external help. The heat and humidity of Kolkata came to their aid; dehydration took a toll, and Kohli had to leave the ground midway.

However, he did return, and returned with a vengeance. The onslaught continued, and Dhoni’s record — 207 off 126 balls (20 fours, 10 sixes) for Shyambazar Club against George Telegraph in the 2005 quarter-final — looked under threat.

Kohli never made it, but the chasm was not a big one. By the time he tried to clear the fence off the bowling of off-spinner Suvojit Chakraborty and holed out to Tiwary, he had smashed a 121-ball 184, and Mohun Bagan AC had as good as won the trophy. The innings consisted of 20 fours and 8 sixes. He was clearly the difference between the sides, but he was far from happy.

Kohli later told the press: “My team-mates told me about Dhoni’s knock and I had that in my mind. I was unfortunate not to get there. I was determined to make amends after the failure in the semi-final. It was very hot and humid out there. But the wicket was excellent to bat on.”

Somsuvra Laha wrote in Hindustan Times that Kohli “wasn’t very exuberant about his knock. Instead he preferred sitting quietly at one corner checking out his blade even as his team rejoiced on the sidelines. Kohli is one of those players who is not impressed with himself easily.”

Mohun Bagan piled up a near-unassailable 312, with only Chakraborty (10-0-45-5) returning respectable figures. Town Club were never in the hunt, losing wickets at regular intervals, especially to seamer Mohammed Ashrafuddin (8-0-39-5) and former Bengal off-spinner Ritam Kundu (2 for 28).

Only Tiwary (36) and lower down the order, that man Chakraborty (44), put up some resistance. Town Club sunk without a trace, losing by 97 runs. 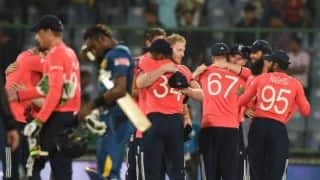 T20 World Cup 2016: Dale Steyn is not thinking of retiring out of any format, says Faf du Plessis