On July 27, 1936, 588 runs were scored in a single day’s play during a Test between India and England at Old Trafford, Manchester. England scored 398 of those runs, but Vijay Merchant and Syed Mushtaq Ali retaliated with a 190-run opening stand. The record for 'most runs in a day’s play’ stands till date. Karthik Parimal revisits the momentous game. Vijay Merchant (left) and Mushtaq Ali walk out to bat against England in the 1936 Old Trafford Test.  Merchant scored 114 and Musthaq Ali 112 and added 203 in India’s second innings which helped the team earn a respectable draw © Getty Images

On July 27, 1936, 588 runs were scored in a single day’s play during a Test between India and England at Old Trafford, Manchester. England scored 398 of those runs, but Vijay Merchant and Syed Mushtaq Ali retaliated with a 190-run opening stand. The record for ‘most runs in a day’s play’ stands till date. Karthik Parimal revisits the momentous game.

The first Test between the two sides at Lord’s saw a plethora of batting failures. India gained the upper hand for a brief moment during that game, but slumped quickly after a second innings batting disaster that saw them succumb for less than 100. England cruised to a nine-wicket victory. The first day of the second Test, played at Old Trafford, saw India falter yet again, but the hosts walked out with a mind-set that was much different from that of their counterparts’. If the difference in class between the two sides wasn’t visible at Lord’s, it certainly came to the fore at Manchester.

If Len Hutton was asked why he’d rather watch one hour of Wally Hammond bat than 10 hours of Don Bradman, he could have cited this innings as one of the examples. Walking in to bat after Harold Gimblett was bowled by Mohammad Nissar, with just 12 runs on the board, Hammond’s willow did more than just control damage. Strokes flew at ease and the Indian bowlers were flabbergasted, although, surely, they weren’t caught unawares. His first 50 comprised eight hits to the fence and the ones that caught maximum attention were his glorious, trademark cover drives.

By the time stumps were called, England raced to 173 for two, 30 behind India’s total, and Hammond perched on a handsome 118. His partner for most part of the first day, Arthur Fagg, could muster just 39. Such was the disdain with which Hammond treated the Indian bowlers. His hundred came in as many minutes, off 138 deliveries. The fact that this was his comeback match hardly seemed to matter. It was as though he’d never taken a break. “The moral effect of his fearless hitting could not be over-estimated. Hammond from the first did much as he pleased with the bowlers,” noted Wisden.

A record that continues to stand after 77 years

The next morning was no different for the Indian bowlers. The presence of Stan Worthington in the side was debated before the commencement of the Test, but it only took a little more than an hour for the batsman to prove his salt. A 127-run partnership ensued during the aforesaid period. Hammond blazed his way to 167, an innings that included 21 fours before CK Nayudu zipped past his defence. Shortly after that, Laurie Fishlock, the next in, was dismissed similarly too. With England’s score suddenly slipping to 289 for four, the Indians sensed an opening, but Joe Hardstaff Jr. walked in and thwacked a breezy 94. With Worthington at the other end, another 100-run stand followed.

While Hardstaff continued to unfurl spectacular drives, Worthington’s innings came to an end at 87. As Gubby Allen — the English skipper, fell for just one, the momentum swayed India’s way and Hardstaff was dismissed owing to an outstanding catch by Nayudu, who grabbed the ball with just one hand at extra cover. At 409 for seven, the pair of Walter Robins and Hedley Verity got together.

The two punished the hapless Indian bowlers, who were sans any energy and bearing a depleted morale, as 91 runs were scored per hour during one juncture. Another century partnership, the third of the Test, was brought up. While Robins hit 14 fours during his 76, Verity zoomed to a career-best 66. “Verity continued the punishment of bowling which had long since revealed deficiencies and England, having kept their opponents in the field for six hours and a quarter and scored at an average rate of 91 runs an hour, declared with eight wickets down,” stated the 1937 edition of Wisden Almanack.

After 398 runs had been added, far before the close of play, Allen declared England’s innings at 571 for the loss of eight wickets. Going by India’s recent spate of performances, it was expected they’d crumble under the physical and psychological stress that was constant exerted upon them, but what followed was a pleasant surprise, not just for the Indian audience, but to world cricket in general.

Vijay Merchant had been getting starts throughout the tour, but was stumbling when it came to converting them into big ones. Syed Mushtaq Ali looked, without a doubt, out of sorts. When the two walked out with a gargantuan task ahead of them, it remained to be seen if they could last an hour. But with the pitch easing out and offering no assistance to the bowlers, the two made hay. The assignment was made less difficult by the constant full-pitch deliveries bowled to them. Merchant drove and cut nonchalantly, whereas Mushtaq hooked Allen for 15 runs off one over. By the end of the day, the Indians had reached 190 for no loss, walking off amidst great applause and well-earned respect.

The statistic that surfaced after the end of day’s play stole the spotlight. A total of 588 runs had been scored on that day, a record that stands firm till date. The previous best was 522 during a Test at Lord’s between England and South Africa in 1924. The two teams also put up 508 the previous year [1935] at the Oval.

The English were surely responsible for the bulk of the scoring, but Merchant and Mushtaq’s stand (both collected individual centuries too while adding 203 for the opening wicket) along with some assistance from the weather gods, helped India draw the Test. 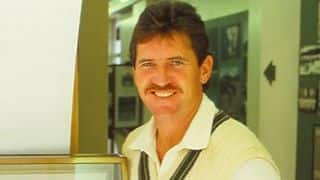