Not only bats but cricket bats fly too; MS Dhoni, Kumar Sangakkara and many other batsmen have been involved in such incidents.

The word ‘bat’ has 3 different connotations. While the least important meaning of it is – to flutter or wink, the other two have a lot of importance in context of this piece. Mammals of the Chiroptera type, mainly nocturnal, only bats are capable of true flight. Although, bats require – three basic features that enable them to achieve that – membranous wings, lift and the body. In a similar way, a cricket bat, which is the most popular and relatable meaning of the word ‘bat’, with a handle and a wooden surface, does the job for a cricketer. With a decent bat lift, swing, arm movement, hand-eye co-ordination, a bit of reflexes and feet movement, a Virat Kohli or an AB de Villiers can easily strike the cricket ball the way they like. And yes, cricket bats fly too!

Okay, do you remember seeing a cricket bat fly? When was the last time you saw a cricket bat fly? You might surely recall one or two instances, but not more. And that is because of two reasons. The first being, it is something very unusual and rare. Second, because we are used to seeing the ball fly out of the ground, not the bat. But, there have been instances when the unlikely has happened. WATCH: VIDEO: Faf du Plessis’s bat flies out of his hand during Bangladesh vs South Africa 2015, 1st T20I at Dhaka

Former New Zealand cricketer Mark Richardson has been part of plenty of funny incidents on the cricket field. His side was playing against India in a Test more than a decade ago and after being dropped off the previous delivery by Ajit Agarkar, he played a straight drive that went to the boundary. But while the ball was traveling towards the ropes, Richardson was shadow practicing a shot and that is when his bat went flying in the air. An embarrassed Richardson immediately rushed to get his bat while apologising to the umpire as well. The commentators certainly found it amusing and couldn’t control their laughter. But then, such incidents does leave everyone in splits, the viewers, the players, even the umpires and quite obviously the commentator, who are observing it closely. WATCH: Mark Richardson hilariously throws bat and chases it

Of course, the reason behind players losing their bat out of their hands might be very obvious. While trying to put in more power in the shot and have a wild swing at it, they tend to lose the grip of the bat and way it goes flying. But still, it is a funny sight in the game, and takes the attention away from serious cricket, even if it is just for a few seconds.

Another player with whom this has happened at least twice if not more than that is India’s T20 and ODI captain MS Dhoni. Known for his immense strength and power, Dhoni likes to play shots with his bottom-hand, which also makes it evident as to why he lost the grip of the bat on those two occasions. Anyway, the first instance is worth sharing.

With India needing 44 off 8 balls against Australia in a T20 game, Dhoni had an impossible task at hand. More so, because the bowler in front of him was Brett Lee, known to be one of the fastest bowlers in the world. As Lee bowled the next delivery, which did land in Dhoni’s range, the Indian skipper had a ‘Helicopter’ swing at it. The ball didn’t meet the bat but the bat went flying and landed a few metres away from leg-umpire Paul Reiffel.

Although, Brett Lee’s appeal for a caught behind seemed funny, the commentators on air enjoyed the incident the most. One of them rightly summed it up – “It’s like a Hammer Throw…..at the Olympics!”

Although, it is not only Dhoni – there have been a number of players who have lost their bat in the air while batting. Kumar Sangakkara, one of Sri Lanka’s and the world’s best batsmen once experienced it the harsh way. While playing in an ODI against India, ‘Sanga’s bat landed on the stumps when he tried to nudge a full toss to the leg-side, a dismissal he mentioned of as his worst ever, during the Q & A session of the MCC Spirit of Cricket Cowdrey Lecture this year. Poor Sanga was out hit-wicket!

Well, if Sangakkara’s bat can fly, then perhaps, bats can fly!

Sanga might have a laugh about it now but the bat certainly got the better off him. 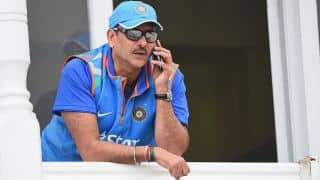