In September 1998, the Commonwealth Games in Malaysia featured cricket and it presented hope for the sport’s entry into events such as the Olympics and the Asian Games. South Africa won the gold medal, with Australia finishing with the silver. Nishad Pai Vaidya goes back in time and recalls that tournament. 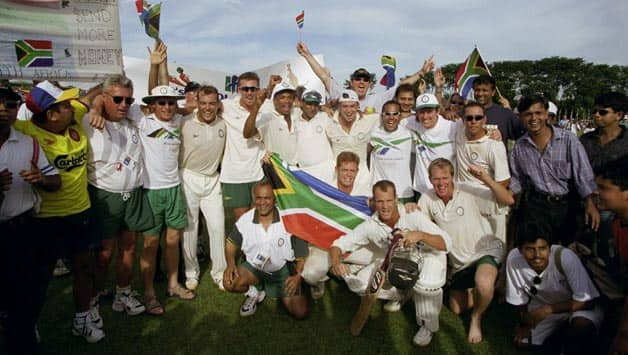 In September 1998, the Commonwealth Games in Malaysia featured cricket and it presented hope for the sport’s entry into events such as the Olympics and the Asian Games. South Africa won the gold medal, with Australia finishing with the silver. Nishad Pai Vaidya goes back in time and recalls that tournament.
In 1900, cricket made a brief appearance at the Olympics and vanished from the world games’ scene thereafter. While the long format was considered time consuming for a confluence of sport, the advent of One-Day Internationals (ODIs) presented hope for cricket to be included in a multi-sport meet. That hope received a shot in the arm when cricket featured at the Commonwealth Games 1998 in Kuala Lumpur, Malaysia. After all, the sport was majorly played in the Commonwealth countries and it made sense to introduce the gentleman’s game there. Ultimately, South Africa returned home with the gold medal and added to their nation’s tally at the competition.

Amidst some buzz, cricket made an entry as a few big superstars were there to grace the event. For India, a country that struggled to win medals in athletics and other sports, it provided a shot at a medal. Along with India, all the other Test playing nations made the cut. Since the Caribbean Islands came into the Games as individual countries, a combined West Indian side didn’t fit into the mould. As a result, Antigua and Barbados participated.

From the non-Test playing nations, Kenya, Scotland, Canada, Bangladesh, Northern Ireland and hosts Malaysia joined the lot. The 16 teams were divided in groups of four each. India were placed in Group B alongside Australia, Canada and Antigua and Barbuda. From each group, one team would qualify for the semi-finals. Australia had all their major players, but most other teams had sent relatively weaker units.

It is interesting to note that these games were not accorded ODI status, but were considered List A encounters. On September 9, the first game was played between Antigua and India at the Tenaga National Sports Complex. Antigua had the likes of Richie Richardson, Winston Benjamin, Eldine Baptiste and Curtly Ambrose to name a few. India were led by Ajay Jadeja and featured Sachin Tendulkar, Anil Kumble, Robin Singh and Harbhajan Singh. Rain intervened during that match and there was no result.

At the outset, it was evident that the battle for the qualification into the semi-finals would be between the two strong sides in the each group. Ultimately, New Zealand, Sri Lanka, Australia and South Africa made it to the knock-outs. India won only a solitary game, which was against Canada and lost to Australia. Since their first match did not produce a result, they did not have enough victories and were heading home.

At the same time, India and Pakistan were warming up for their annual Sahara Cup in Toronto. As it clashed with the Games, the boards of the two nations named two separate squads — with the stronger one heading to Canada. Since India had sent players like Tendulkar, Jadeja, Kumble and Robin to Malaysia, they were hoping to fly them to Canada for the remaining ODIs if they did not qualify for the semi-finals. Now that it was confirmed, the board was in action to send them to Canada to bolster the team. Initially, the Pakistan team did not agree, but ultimately only Tendulkar and Jadeja were allowed to go there.

Coming back to the Games, South Africa and Sri Lanka clashed in the first semi-final. Nicky Boje’s miserly spell of four for 16 bundled the Hashan Tillakaratne-led Sri Lanka for 130. In reply, South Africa were literally strangled, but mind you, they did not “choke”. They were 96 for nine chasing the total, but the last-wicket pair of Alan Dawson and Nicky Boje calmly saw them through in 47 overs.

The other semi-final between Australia and New Zealand was very one-sided. Brad Young bowled a spell of four for four with Damien Fleming taking three for 23 as the Kiwis were bowled out for 58. Adam Gilchrist’s onslaught ensured they got through in 10 overs. The vanquished teams still had hope of clinching a medal as they contested for the Bronze. In the battle for the third-spot, New Zealand beat Sri Lanka by 51 runs.

However, the major focus was on the final as international cricketers had a chance to get the gold for their respective countries. As Abhishek Mukherjee wrote, two clubs had participated at the Olympics in 1900, but this time professional cricketers were to clinch medals. And, you had the two strongest teams in the final, Australia and South Africa — a rivalry that was shaping up in the 1990s. South Africa were led by Shaun Pollock and were missing some of their big players. No problems on the Australian side of things as they had their dominating line-up, albeit without Shane Warne.

In the final on September 19, Pollock won the toss and elected to bowl first. Leading from the front, he snared Gilchrist, Mark Waugh and Ricky Ponting inside the first 10 overs. Darren Lehmann hung around with Steve Waugh for a while, but wickets fell at regular intervals. The Australian skipper continued to fight and scored at a good rate. But, ultimately, they were bowled out for 183. Pollock had done majority of the damage with four for 19. Paul Adams chipped in with two for 33. Steve Waugh remained unbeaten on 90.

In reply, Mike Rindel led South Africa’s run-chase along with Jacques Kallis. Andrew Hudson too contributed with 36 at the top as South Africa were coasting towards the total. At 158 for two, the result looked a foregone conclusion, but Australia had other plans. Lehmann’s seemingly innocuous left-arm orthodox snared three scalps to send a few jitters in South Africa’s spine as they neared the target. However, that was too little too late as South Africa won with four overs to spare, although they had lost six wickets. The tournament was largely a success and about 7,500 people had come to watch the final. Pollock told ESPNcricinfo, “Standing up on the podium, receiving the medal and singing our National Anthem is an experience I will never forget and will always treasure. The ceremony was followed by a well-deserved party/celebration which we all enjoyed with members of the other South African teams who had finished their competitions.”