The Duke of Queensberry once placed a bet that he could make a letter travel fifty miles in an hour without the help of carrier pigeons.

It is difficult to put a date to when cricket s love-hate relationship with pigeons had started, but it was obviously centuries before Jacques Rudolph accidentally killed one on the ground or Glenn McGrath acquired his famous nickname or Arafat Sunny, cricket s most famous pigeon fancier, got his cap or even before Charlie Elliott spotted Basil D Oliveira setting a cat among a flock in the 1968 Oval Test.

The pigeons, of course, did their bit to make their presence felt in the realm of cricket: they have blessed statues of cricketers in characteristic fashion; they have flocked to grounds in large numbers; and have even featured in luncheon menus.

Of course, the Pigeon-Hole principle turned out to be immensely useful when someone argued that Chris Martin had never reached the score of two. The bookies have had their shares of stool pigeons inside dressing-rooms, while Shane Warne had reduced many a competent batsman to clay pigeons during his illustrious career.

But seldom have pigeons competed with cricketers.

The Dukedom of Queensberry, created in 1684, still exists. The 6th Duke (also 4th Duke of Buccleuch but usually referred to as Earl of Dalkeith), played 3 First-Class matches. The 8th and 9th Dukes became MCC Presidents.

The greatest cricketer of them was the 8th Duke, William Montagu Douglas Scott (also 6th Duke of Buccleuch), who played for 22 First-Class matches, mostly for Oxford, Middlesex, and MCC. He scored 100 and 66 in the Varsity match of 1887.

So yes, they were a family who liked cricket.

The incident involves a Duke of Queensberry, but one cannot be sure which one. The 6th Duke is the most likely suspect, since he became Duke in 1812 and the anecdote appeared in print in May 1825.

The Duke once placed a bet that he would help carry a letter across fifty miles inside an hour without the aid of carrier pigeons. This was obviously an improbable ask.

So birds especially carrier pigeons were the fastest method for any transport of letters over a long distance. It is not clear whom he had challenged, but that person readily took up the bet.

The Duke obviously had a plan. He now started to work on it. He enclosed the letter inside a cricket ball. Exactly how this was done is not clear. Perhaps he had a ball made from scratch with the letter inside.

Once that was done, he placed 24 expert cricketers along the five-mile stretch. The cricketers, placed strategically, picked up the ball and transferred to each other .

Exactly how this was done is not clear. It was obviously not one throw per person, since in that case every throw would have to be a ridiculous two miles on average, and nobody in human history hit the 150-yard mark with a single throw. Nobody has hit a 175-yard six either, but perhaps this was hit with something heavier than a cricket bat. Perhaps the ball was of a different material or mass.

Whatever the method was, the Duke won the bet. 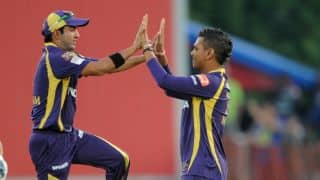