When FIFA World Cup 2014 killed the cricket journalist in me

When FIFA World Cup 2014 killed the cricket journalist in me

Growing up in 1990s Bengal — or Calcutta — sports meant nothing more than Sourav Ganguly, Mohun Bagan-East Bengal clashes and watching Wimbledon men’s final on Sunday evenings with the family. My earliest memories of watching any sport is watching a 28-year-old Boris Becker fighting four sets and finally giving up to 24-year-old Pete Sampras in the Wimbledon men’s final of 1995. That is followed by Sachin Tendulkar’s destruction of Australian bowlers in Sharjah, and Tendulkar and Bengal Prince Sourav Ganguly’s 252-run partnership against Sri Lanka.

Those days, boys played football during monsoons (instead of round the calendar) and cricket was the sport that grabbed each and every kid’s attention. As for girls, they restricted themselves to hide-and-seek and badminton during winters. The cricket wave took over Calcuttans by early 2000 mostly due to Ganguly’s many achievements.

There was another reason for taking up cricket as the preferred sport: unlike football, you never needed a large ground to play cricket; you could easily play in a lane and only care about the ball hitting someone’s window or landing up in the neighbouring colony.

However, football — that is now every Calcuttans birthright to argue and talk about — changed the whole face of the city. Buildings were coloured in Brazilian or Argentine colours. Posters of Pele, Diego Maradonna, and Franz Beckenbauer still hung up from the walls though they had quit the game, and occasional fights broke out after the crowds’ favourite team lost and crashed out.

It was the 1998 Football World Cup that I clearly remember Argentine fans burning flags of England and posters of David Beckham, and dancing with the posters of Zinedine Zidane only weeks later. During the 2002 World Cup, we had painted one of the walls of our classroom with Brazilian and Argentine colours. The class-teacher hardly bothered about it, and that was the first time I noticed girls participating in arguing about which player played better.

The 2010 World Cup was the last one I saw in Calcutta. People went crazy dancing to “Waka Waka” and players like Kaka, Messi, Cristiano Ronaldo, and Wayne Rooney were the latest players to adorn the walls of all the clubs in Calcutta. However, Kaka never scored and Rooney disappointed the few English fans in the city, while Ronaldo crashed out of the World Cup in tears. The Germans almost nailed it but Spain proved too good for everyone and Iker Casillas, Andres Iniesta, David Villa, Xavi and Feranando Torres were the team to look up to. Spain suddenly found supporters in Brazil and Argentina-dominated Calcutta.

A year later, professional commitments made me forget that there was any other sport than cricket in India, especially after the nation hosted and won the ICC World Cup 2011, and then a lot of things happened. Cricket was already a religion in India, but that was not what mattered to us. It was the rush, the thick of things, the madness of news and the running after players for interviews that made us forget that there are sports like tennis, football, golf, and formula one, among others.

Despite that, whenever time permitted, we would take sudden break to watch a good match of El Classico; or Roger Federer versus Rafael Nadal; or would go to see Michael Schumacher drive the crazy Formula One car for the last time.

Despite all that, there was no stopping the football craze. There was just too much of cricket, and football provided the big break. Plus, the time had come to see Lionel Messi, Ronaldo, and Neymar in their national colours. The World Cup is being held in Brazil and there was no stopping the football madness. Being from the city that feeds on club football more than many top cities of the country, cricket has disappeared from my brains, eyes, ears, and heart. The restlessness to watch Brazil, Argentina, Portugal, Germany, Spain and Netherlands and some of the best names in football come together provides far more joy than a cricket Twenty20 cricket match between India and Pakistan. It is the wait for the team you support to progress and fight it out against other teams, and the wait is  for four years. One doesn’t have to wait for good cricket for four years. 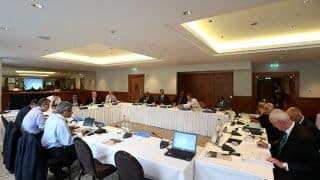