On July 29, 2006, the prolific Sri Lankan captain and vice-captain pair of Mahela Jayawardene and Kumar Sangakkara pummeled their way to a record-breaking stand against South Africa at Colombo. Jaideep Vaidya goes through the elegant carnage. 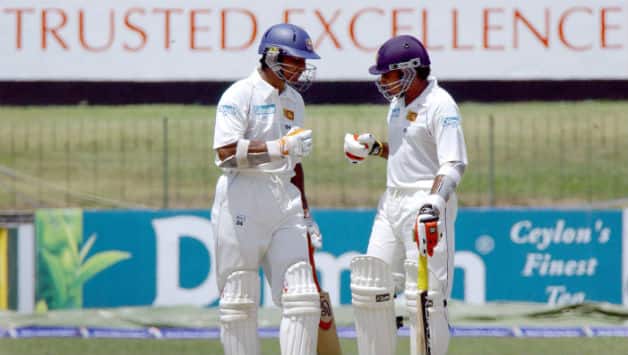 On July 29, 2006, the prolific Sri Lankan captain and vice-captain pair of Mahela Jayawardene and Kumar Sangakkara pummeled their way to a record-breaking stand against South Africa at Colombo. Jaideep Vaidya goes through the elegant carnage.
Sangakkara and Jayawardene. Not the easiest of words to pronounce, more so when spoken together. However, for enthusiasts of cricket, the two words sound and resonate to a rhythm that seems to come right out of a Robert Frost piece. Sangakkara and Jayawardene may not be as prolific and popular as Greenidge and Haynes, or Tendulkar and Dravid, or Hayden and Langer, but when the two Sri Lankans bat together, they appear to be made for each other — in every sense.

The success story Kumar Sangakkara and Mahela Jayawardene — or ‘Sangawardene’ if you may — isn’t any ordinary one. The left-right combination thoroughly enjoy each other’s company on the field and are best of pals even off it. They are co-owners of a popular sea-food joint on the Emerald Isle and the owners of Sri Lanka’s most successful batting pairing on the cricket field ever. In 107 Test innings together, the duo have piled 5,713 runs — the fourth-highest tally ever recorded by a partnership in Tests — at 55.46. The way they are going, even in the last mile of their careers, it won’t be surprising if they go on to beat Sachin Tendulkar and Rahul Dravid’s record of 6,920 runs.

Watching ‘Sangawardene’ bat is like watching a well-oiled machine, functioning like clockwork. Their instincts and ability to read each other’s minds and concerns seem innate. If one is struggling, the other takes up the majority of the scoring responsibility and allows the other to settle down. If the situation calls for a brisk 100-run partnership, they will step on it and surge ahead; and if it calls for a grinding, patient and persevering mammoth stand, Sangakkara and Jayawardene will do it blindfolded, like they did at the Sinhalese Sports Club (SSC) ground, Colombo, in 2006 against a hapless South African attack.

It wasn’t the liveliest and challenging of pitches in hot and humid late July. On the first couple of days, it promised to be a perfect batting track and the South Africans got their noses ahead by winning the toss and opting to bat first. However, the Proteas’ advantage was negated by Dilhara Fernando and Muttiah Muralitharan, who bagged four victims each, and helped Sri Lanka bowl their guests out by tea on the first day itself, for a none-too-impressive 169.

In response, a charged-up Dale Steyn scalped the two Lankan openers, Upul Tharanga and Sanath Jayasuriya, within the first four overs. This was when Sangakkara and Jayawardene came together. The awesome twosome took the attack to the Proteas and scored at a rate just under five to end the day on 128 for two, just 41 runs behind, with both scoring unbeaten half-centuries. Mahela Jayawardene (left) went onto score 374, while Kumar Sangakkara was dismissed for 287 © AFP

Day Two saw more pain and toil for the South Africans as ‘Sangawardene’ settled in and dug into their opposition. The shots were crisp and rarely missing the sweet spot of the bats. There was barely any aggression, but elegance aplenty as they sprayed boundaries all over the park. It was almost as if they waltzed along carefree, with no apprehension or obstacle to mind of, reducing the South African bowlers to mere puppets made to deliver the red cherries to whack. They played throughout the day, scoring 357 runs and not giving the now homesick tourists the pleasure of even a single wicket — a record tally. At stumps, Sri Lanka were on an imposing 485 for two, with both Sangakkara and Jayawardene recording double centuries.

After a nice ice bath, physio and masseur session, and a good night’s rest, the duo carried on the following day. By lunch on Day Three, their partnership stood at 570 — just seven runs behind the world record 576-run stand between Jayasuriya (340) and Roshan Mahanama (225) against India. Post the interval, Sangakkara and Jayawardene held the new world record in both Test and First-Class cricket, which was celebrated by the ground authorities with loud fireworks. Unlike the Khettarama Test eight years ago, this one didn’t seem to be heading towards a meaningless draw, with the Lankans having more than two days to bowl South Africa out again.

“We knew it was the record — both the Test and First-Class record — it’s a great feeling, to do something that nobody else has done before,” Sangakkara was quoted as saying by the Guardian after the innings ended. “That’s what records are there for, to inspire you to try to break them. Hopefully one day someone else will break this one — that’s the way cricket should go.”

Finally, after 157 overs and over 10 hours of tireless defiance, Sangakkara chased after a wide delivery from Andrew Hall and ended up nicking it to wicketkeeper Mark Boucher. Sangakkara’s archetypal classy innings had ended on 287, just 13 short of what would have been a second triple century in the same innings, after Jayawardene had earlier notched his. However, Sangakkara’s knock was good enough to go down the record books as the highest ever Test score by a wicketkeeper, beating his own record of 270. Sangakkara and Jayawardene also became only the second pair in Test history to score 250s in the same innings, after Garry Sobers and Conrad Hunte achieved it for West Indies against Pakistan in 1957-58. Their third-wicket epic had ended on 624 runs — a record that will take something to emulate.

“I cannot in anyway be disappointed,” Sangakkara said later. “How can you be after you have scored 287? But having said that, I must admit I was looking to get to 300. As for the [earlier world] record [partnership], I can recall following it as a schoolboy when the two greats of that time Sanath Jayasuriya and Roshan Mahanama established it. It is a good feeling to be able to pass that record.”

Meanwhile, Jayawardene wasn’t done for the day and soldiered on. As he got past his triple hundred, becoming only the second Sri Lankan after Jayasuriya to do so, and looked unflappable in the middle, the SSC crowd began to dream of the ultimate. Brian Lara’s world record of 400 runs in an innings was not so far away now, and with enough time left in the match to win it, Jayawardene had the blessings of his teammates and coach Tom Moody to carry on. The South Africans looked down and out, all but ready to collapse. It was almost inevitable.

However, the perennially sprightly Andre Nel, who had been bludgeoned all over the SSC for more than six sessions, delivered a ball that kept low and snuck under the bat to dislodge the Jayawardene’s woodwork. Almost cruelly, he was gone for 374, achieved from facing 572 balls at the crease and hitting 44 fours and a six. He had fallen just one run short of Lara’s 1994 figure of 375 and six behind Matthew Hayden’s 380. However, what made his innings stand out was the fact that he had not offered his opposition a single chance before the delivery that dismissed him, unlike Sangakkara who had been bowled off a no-ball and dropped at gully.

Jayawardene declared his team’s innings immediately after his dismissal, on 756 for five — the fourth highest score in Test history. A 587-run lead was surplus for his bowlers to bowl South Africa out on the final day for 434, handing them a handsome innings and 153-run win. To further rub salt in their opponents’ wounds, Sri Lanka’s lead of 587 was the highest achieved by a side batting second, beating South Africa’s own 509 at Lord’s in 2003.

“It was a fantastic feeling,” said Jayawardene of the record-breaking stand, as quoted by BBC. “Kumar and I are very good friends on and off the field and I am privileged to be involved in this with him.” Talking of his personal milestone of passing Jayasuriya’s 340, the previous highest Test score by a Sri Lankan, Jayawardene said, “I’m so proud to have passed Sanath’s record. He’s a great cricketer and it’s something everyone wants to have. I’m absolutely delighted. One day somebody will come along and break that, but right now I have it and that’s a great feeling. There’s a little bit of disappointment that I didn’t get to the 400 mark, but I’m very, very satisfied with what I have achieved.”

They say records are meant to be broken, and there probably would come a day when a pair would score more than 624 runs together, given how the game is evolving and progressing. However, emulating ‘Sangawardene’ isn’t a task for mere mortals. What the SSC witnessed on that hot July summer’s day was a once-in-a-lifetime display. It was elegant carnage, so to say.