On July 23, 1994, English skipper Michael Atherton filled his pockets with dust before smearing it on the ball and altering its condition. The action, understandably, put him on the verge of suspension but, after being severely reprimanded by the cricketing fraternity, was let off with a warning.Karthik Parimal revisits that eventful incident. 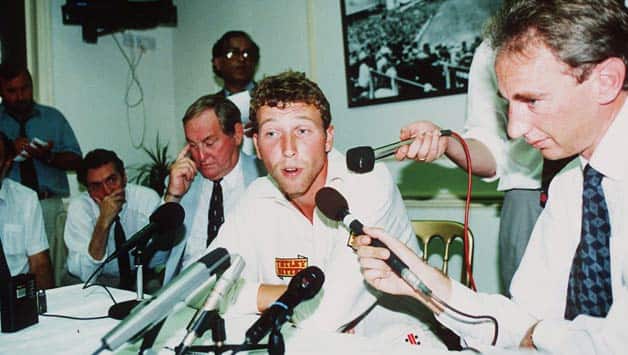 On July 23, 1994, English skipper Michael Atherton filled his pockets with dust before smearing it on the ball and altering its condition. The action, understandably, put him on the verge of suspension but, after being severely reprimanded by the cricketing fraternity, was let off with a warning. Karthik Parimal revisits that eventful incident.

July 21, 1994, was indeed a historic day for South African cricket, for it was to be their first Test against England in 29 years, and that too at the headquarters of cricket — Lord’s. Leading the hosts was Michael Atherton, a young captain so trusted that the task of marshalling some of the most seasoned campaigners was assigned to him. In the brief period at helm, he provided ample evidence of the fact that he was a natural and, without doubt, a long-term candidate for the post. However, what happened on the third day of that epic Test could have easily put an abrupt end to his tenure as England’s captain.

The South Africans chose to bat first and pummelled 357, a score that was considered formidable against a frail English batting line-up. Kepler Wessels, the skipper, scored 105 of them, as only Darren Gough and Angus Fraser, with four and three wickets respectively, managed to make inroads. In reply, the English were skittled out for 180 with none of them crossing even 40. The only way for them to claw back into the game was through their bowlers, with Gough as the spearhead again. But on July 23, 1994, the third morning, even he could make little purchase, and that is when Atherton decided to take matters into his own hands, quite literally.

By afternoon, when some hint of reverse-swing excited Gough, he asked his players to keep their sweaty palms away from the rough side of the ball, so as to maintain its condition. At this point, Ian Salisbury rubbed his hands on the dry part of the outfield to get rid of the moisture on his hands, but Atherton went a step further. He picked some dust from the used pitch, close to where he was fielding, before putting it into his pocket. When the ball was tossed to him, he duly put his hands into the pocket, brought out the dust and smeared it onto the dry side of the ball before lobbing it back to Gough. The television cameras were aptly located and captured the incident from all imaginable angles. Understandably, the media went berserk even before the completion of the over.

At the end of the day’s play, match referee Peter Burge summoned Atherton and asked for an explanation. Although what transpired in the hearing room wasn’t divulged on the day, Burge issued a statement that regarded Atherton’s version of the story as satisfactory. It was later revealed that the English skipper had made it clear to Burge that he only dried his sweaty hands on the ground. He was let off without any charge. However, Keith Fletcher and Ray Illingworth, two of the members of the England management, were told a different tale. They soon realised that the speculations floating around tirelessly in the media weren’t baseless after all.

Atherton confessed to filling his pockets with dust before using it on the ball. He was immediately bombarded by a barrage of criticism, even from his own camp. Denis Compton and Geoff Boycott, two former stalwarts of English cricket, demanded that Atherton be fired. Illingworth fined the skipper £2,000 — £1,000 for using dirt to dry his fingers and £1,000 for concealing the actual story from an International Cricket Council (ICC) official. A livid Burge called Atherton’s actions “foolish” and said it couldn’t be condoned “particularly when done by a Test captain.” “The fact that Atherton misled an ICC referee by not giving a full and frank disclosure when given the opportunity to do so concerns me more because of the effect on the image of cricket,” he further stated in his press release.

The newspapers flashed the incident across their front pages the following day. “Atherton comes clean on a pocket full of dirt,” wrote The Independent, whereas The New York Times was more forthcoming. “England Aghast as Team Captain Admits Dusting Ball: This Dirt Simply Isn’t Cricket,” their headline read.

The English cricketers, although not inked on paper, were presumed to be flag-bearers of the game. Ironically, two years before this incident, an English batsman (Allan Lamb) had accused a Pakistani bowler (Sarfraz Nawaz) of ball-tampering and, although the former was sued, he received tremendous support from the cricket fraternity for speaking up on the issue. It was widely believed that Pakistan’s bowling department often fidgeted with the condition of the ball and gained an undue advantage through it. It was also believed by some that they were the only team who could resort to such sour tactics. Atherton’s actions made a mockery of England’s stand on the issue.

Atherton argued that he was only “maintaining the condition of the ball” and not “changing” it and wondered what all the hullaballoo was about. The issue was furiously debated, but to the South African batsmen, it mattered little. The ball, regardless of its state, was thwacked around Lord’s and a target of 456 was left to chase for England. They succumbed to 99 and conceded defeat by an appalling margin of 356 runs. The Test, which was put on the backburner ever since that third, eventful afternoon, was one of England’s biggest defeats.

Atherton wasn’t suspended. In the next Test, he hammered 99 and won back the hearts of the press. Illingworth justified the punishment, saying it saved Atherton from a definite suspension and perhaps also his axing as captain. Wisden, though, was critical of his actions. “If Atherton was a cheat, he was not a very successful one. England’s bowlers mostly failed, though not quite as humiliatingly as their batsmen,” it noted.