When Misbah-ul-Haq was on 'Thug Life' mode!

When Misbah-ul-Haq was on 'Thug Life' mode!

Test cricket for Misbah seems like, it is his area of expertise. When he started playing those sweeps and reverse sweeps, you can bet he was on Thug Life mode.

As time passed and we inched towards the start of the first Test between England and Pakistan at Lord’s, the noise around Mohammad Aamer’s return to Test cricket was the loudest. It was almost as if the gathering at Lord’s was just wanting to see Aamer with the red cherry in his hand as they had seen five years back. But as a wonderful day of Test cricket ended, the limelight was on just one man. A warrior, calm and serene as silence before the storm, Misbah-ul-Haq walked off after Stumps on Day 1, after becoming the oldest captain in the history of the game to score a Test hundred. LIVE CRICKET SCORECARD: England vs Pakistan , 1st Test match at Lord’s

And while he went into the dressing room after putting up a class show, the 42-year old’s attitude reiterated what William Frederick Halsey once said, “There are no great people in this world, only great challenges which ordinary people rise to meet.”

When Misbah arrived at the crease, Pakistan were 77 for 3. He had Younis Khan, another fine Test player at the other end. He knew what had to be done. He did just that. He began cautiously, more in the trademark ‘Misbah-like’ fashion.

Misbah is supreme at two things. He can defend the ball almost all-day long, almost making a bowler’s effort of running in with steam, nugatory. Or he can be creative and improvise in his batting, while still looking unorthodox.

He did both the things perfectly on Day 1.

He was rock solid in his defences while leaving the balls outside the 5th stump and avoiding risks against pacers. He played within his limits and strengths. He found boundaries quite often and kept going in an easy peasy manner. READ: Misbah-ul-Haq redefines fairytale at Lord s

Mind you, Misbah did survive a few run-out chances during his partnership with Asad Shafiq, but that was perhaps the only way he could have got out, as for the way he made batting look. Misbah, in the only format he plays, was looking set for a hundred at Lord’s, in his first appearance at the Home of cricket. READ: Misbah-ul-Haq: Man who defies convention

But when Moeen Ali began his over soon after the drinks interval in the final session, Misbah got into his own. He cleverly manipulated the field with four boundaries in five balls and that’s when everyone knew he was going to be there soon. You could for a second compare Misbah to Roger Federer. Federer with 7 Wimbledon titles to his name, winning the grass tournament for five consecutive years in between 2003-2007, almost owned the place. It was his backyard, his place. READ: Misbah-ul-Haq becomes 6th oldest Test player to score a century

Similarly, Test cricket for Misbah seems like his area of expertise. When he started playing those sweeps and reverse sweeps, you can bet he was on Thug Life mode.

He remained unruffled by Steven Finn’s line down the legside as he approached his hundred and when he reached it, the celebrations were of some class too. The ’42-years young’ as the commentator said, kept his bat on the ground, took off his gloves and saluted the dressing room as they applauded their skipper whole-heartedly. He then celebrated in a way that would have definitely made Pakistani fans cheer for they know the team is in the right hands. Misbah completed ten push-ups which were as perfect as his innings.

He remained not out at 110 after Stumps, which means he will be back again to continue his innings. To take his team forward as he has always done. 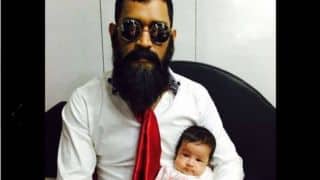 MS Dhoni almost unrecognisable in this photo with Ziva