MS Dhoni played 90 Tests scoring 6 hundreds and 33 fifties. In addition, he has 256 catches and 38 stumpings to his name.

This day in 2005, Sourav Ganguly was replaced as India captain, albeit he was a part of the team. It was Rahul Dravid s first series as a full-time skipper, commencing the infamous Dravid-Greg Chappell era in Indian cricket. It was also Sri Lanka s first Test on Indian soil in eight years.

It was a contest involving three champion spinners Muttiah Muralitharan, Anil Kumble and Harbhajan Singh. There, nonetheless, was more to it: MS Dhoni, a limited-overs specialist, made his Test debut, at M. Chidambaram Stadium, Chepauk. Little did the fans know that they would crave for a glimpse of Dhoni in years to come.

Chaminda Vaas showed his class on a pitch that had little assistance for pacers, returning with 21-14-20-4. Meanwhile, Dhoni showed his knack of batting with the tail on debut. With the top order back in the hut at 109 for 5, Dhoni played his shots to push India’s total over 150.

Before calling it quits from the longest format in December 30, 2014, Dhoni painted his image as one of the flamboyant wicketkeeper-batsmen in Test cricket. He counterattacked to unsettle bowlers, set the tone of the innings, churned out vital runs with the tail and played the waiting game.

224 vs Australia, 2012-13: The series opener of Border-Gavaskar Trophy gave the Aussies a sneak peek into Dhoni’s mindset. The then skipper had just lost a Test series at home (versus England) and was under the pump. His innings (224 off 265) comprised of 24 fours and 6 sixes. The onslaught led to a massive lead, and Australia were never in the game since then. In fact, they were never in the series from thereon. Such was the aftermath of Dhoni’s aggressive knock. This, again, came at Chepauk.

77 & 74* vs England, 2011: India were 0-2 ahead of the penultimate Test at Birmingham, Edgbaston. Nonetheless, their top order continued to falter and were reeling at 111 for 7. Dhoni led a lone battle along with the tail. He found an able ally in Praveen Kumar, and pushed the score close to 200. Dhoni unleashed his attacking mode after Praveen walked back. He missed out on a deserving hundred in order to provide more cushion to the bowlers.

In the second innings, Dhoni again resumed from where he left. India were on the brink of a defeat, and the skipper had to resurrect the innings on his own. His worthy 77 not out off 79 balls delayed an inevitable loss and showed his calibre of scoring even when the chips were down.

68 vs New Zealand, 2013: India were just 36 runs ahead, and had only 4 wickets in hand when Dhoni joined Rahane. While Rahane was set, Dhoni made a statement by scoring at a brisk rate and stretching the lead. His 86-ball 68 enabled Rahane to play freely and register his first overseas hundred. By the time Dhoni left, India were 156 runs ahead and in a strong position.

148 vs Pakistan, 2005: This was another blistering ton from Dhoni following his 183* and 148 in ODIs. Chasing Pakistan’s first-innings score of 588, India were restricted from 236 for 1 to 281 for 5. Dhoni and Irfan Pathan changed the script. Shoaib Akhtar was breathing fire and Dhoni did what he does best: he pulled, drove and cut with aplomb and brutal force. It was Akhtar’s raw pace versus Dhoni’s bat speed that kept spectators glued to the contest. He even danced down the track and thrashed Danish Kaneria. India were all-out for 603.

Dhoni contributed more during his phase as captain. Under his leadership, India won the series against England, Sri Lanka, Australia, West Indies and New Zealand at home. In overseas, he became the second Indian skipper, after Kapil Dev, to win a Test at Lord’s. In 2007 Dhoni also changed his playing style to salvage a famous draw at Lord’s. His overseas record is dismal, but his ability of infusing faith on India’s younger breed paved way for Virat Kohli-led side reclaiming the No. 1 Test rankings, which they had achieved for the first time under Dhoni’s reins. 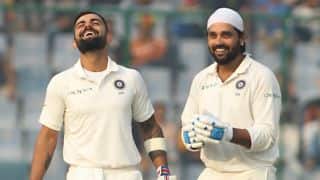