It’s a well-known anecdote and Sunil Gavaskar narrates it often. It’s about how a 14-year-old Sachin Tendulkar missed out on winning the Bombay Cricket Association’s Junior Cricketer of the Year award in 1986-87. And how Sunny consoled him by writing a letter, telling him about another boy who did not win the same award but went on to do not-so-badly in Tests. It’s a well-known anecdote and Sunil Gavaskar narrates it often. It’s about how a 14-year-old Sachin Tendulkar missed out on winning the Bombay Cricket Association’s Junior Cricketer of the Year award in 1986-87. And how Sunny consoled him by writing a letter, telling him about another boy who did not win the same award but went on to do not-so-badly in Tests.

Of course, Gavaskar was talking about himself and well, most cricket fans in this country know this story. But do you know what happened to the boy who pipped Tendulkar to the award? Does the name Jatin Paranjape ring a bell?

As Gavaskar probably expected, Tendulkar did not do so bad for himself either. And former Mumbai left-handed batsman, Paranjape, who won the award that year, also graduated to higher levels and represented Mumbai in victorious Ranji Trophy campaigns, notching up 12 of his 13 first class centuries for Mumbai.

While Tendulkar has managed to exceed expectations and is on the verge of appearing in his 200th Test, Paranjape, after playing four One-Day Internationals (ODI) for India and 62 first class matches from 1991-92 to 2000-01, has moved on and is now working for Nike in Europe football sports marketing. He is currently based in The Netherlands.

A disappointed Tendulkar received a morale-boosting letter from Gavaskar. In a hand-written letter in August 1987, Gavaskar had this post script: “Don’t be disappointed at not getting the Best Junior Cricketer award from BCA. If you look at the past award winners, you will find one name missing and that person has not done badly in Test cricket!!”

Tendulkar went on to win the award the next season (1987-88) along with Abhijit Kale, who represented Maharashtra in Ranji and also played an ODI in 2003.

Paranjape and Tendulkar have shared many good moments together since coming to the limelight as schoolboy cricketers.

“It was a big honour for me to receive the Best Junior Cricketer award from Bombay Cricket Association as I came from a non-cricketing school like Don Bosco,” Paranjape told dna, admitting that he was not aware of that letter Gavaskar wrote to Tendulkar.

Paranjape, one year and a week older to Tendulkar, said he has been a big fan of the young sensation. Of his first memories of Tendulkar, the 41-year-old said: “Sachin loved the game, loved batting, loved bowling, loved fielding. He’s a lovely guy, a big team man and very proud of the Mumbai cap even at that age, He always helped his teammates.”

Though from different schools, Paranjape, son of former Bombay Ranji player and renowned coach Vasu Paranjape, said there was no rivalry between them. “There was never any competition between us. I was a fan of his batting and his nature even at that stage.”

While Tendulkar made his debut for India at 16, Paranjape earned his first India cap when he was 26. Paranjape and Tendulkar played only one ODI together, against Kenya in the tri-series involving Bangladesh in May 1998.

Was Paranjape taken by surprise that Tendulkar debuted for India at 16? “No. I was praying for him,” he said, adding: “Comparing me with Sachin would be an insult to him! Actually, I was very happy and proud that I could play for the Mumbai team, and wear the lion on my chest. It was a very tough transition but Mumbai dressing room teaches you to be tough and keep improving.”

Paranjpe’s other three ODIs were in Toronto against Pakistan in September 1998 that clashed with the Commonwealth Games in Kuala Lumpur (KL) and for which a separate Indian team was sent with Tendulkar in it. Tendulkar did join the team in Toronto from KL and played in the fifth and final ODI against Pakistan. An injury prevented Paranjape from playing any more for India.

“I have no regrets about my playing career. I am happy to have played for Mumbai and India, and have made so many life-long friends along the way,” he said.

For Paranjape, “playing alongside Tendulkar meant the world to me. Every moment spent with him has been special.”

Does Paranjape ever remind Tendulkar about having edged past him for the Schoolboy Cricketer Award?

“Not really. But we talk about the old times a lot. He has an elephantine memory.”

(G Krishnan qualified as an umpire from Tamil Nadu Cricket Association in 1997 before making sports journalism as a career. His other interests include wildlife and reading. Krishnan is Principal Correspondent of DNA where the above article first appeared) 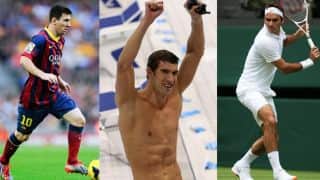