Sachin Tendulkar remains fans' favourite despite his retirement in 2013.

Sachin Tendulkar celebrates his 42nd birthday on April 24, 2015. Even after retiring, Tendulkar remains the fans’ favourite. Nishad Pai Vaidya recalls an incident that took place at the Melbourne Airport recently.

Passengers lined up outside Gate 16 of the Melbourne International Airport as the boarding announcement confirmed the departure of their flight. Suddenly there was commotion, some people left the line and ran towards Gate 18. A short man, dressed casually, dragging his bag was making his way to his flight with a young, muscular and moustached man. “Who has come?” asked someone who couldn’t get a glimpse of them. “Don’t you know! That is Sachin Tendulkar,” said an Indian man as he ran towards Gate 18 to greet his hero. Happy Birthday, Sachin Tendulkar!

The young man with Tendulkar was none other than the Indian opener, Shikhar Dhawan, who was the star during the recently concluded ICC Cricket World Cup 2015. Though Dhawan is a current player and had done well in the big event, hardly any fan bothered him. He slipped somewhere in the background as Tendulkar became the cynosure of all eyes at the gate. People had left their seats from the areas near the gates, some had left the boarding queue and made their way towards Tendulkar. ICC World Cup 1999: Sachin Tendulkar scores emotional 140 not out against Kenya after his father’s demise

I was standing in line for my flight to Delhi on Gate 16. Tendulkar passed by me and a group of journalists with a few fans running behind him. We watched him make his way towards Gate 18 and within seconds he disappeared as the crowd grew behind him. Just as I handed my boarding pass to the Airline staff, I could hear “Sachin! Sachin!” in the distance. This was Melbourne Airport, not Mumbai! Sachin Tendulkar – soul that inspired a generation of young people

Such is the fanfare of the man that even after he has given up the game, he remains the darling of the fans. This incident perfectly sums up his fan following. The fact that he was the fan’s favourite and not a current India cricketer speaks about the aura and the fans’ respect. When he made an appearance at the Melbourne Cricket Ground (MCG) during the India-South Africa clash, the fans roared his name as usual. From his corporate box, he waved to stands below and they were in raptures. Sachin Tendulkar’s No 10 ODI jersey should be retired in his honour

These weren’t the only incidents that reflected Tendulkar’s legendary status. I had more experiences in Australia that showed what esteem the man holds. My landlady in Melbourne said, “I don’t watch much cricket. But, I have heard Sachin Tendulkar speak. He seems a very nice man!” A convenience store owner in Perth told me, “Your captain was here the other day. What is his name? Dhoni. Yeah. I don’t know many Indian players. I only know… Tendulkar.” Before the final, a couple of fans told me outside the Melbourne Cricket Ground (MCG), “You from India mate? Why did Tendulkar retire? Gods don’t retire.” There will never be another cricketer like Sachin Tendulkar, says Pakistan great Saqlain Mushtaq

The legend of Tendulkar lives on! 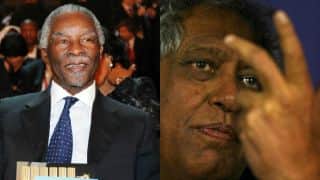