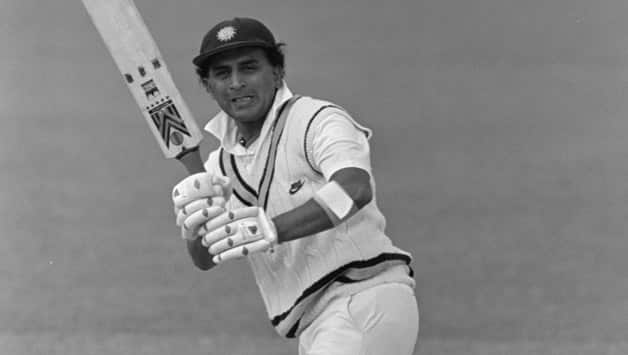 On November 3, 1983, the Delhi Test between India and West Indies ended in an eventful draw. Arunabha Sengupta recounts the memorable fireworks of Sunil Gavaskar on the first day as he had raced to his 29th hundred off just 94 balls.

He was 34 and had carried India on his shoulders for 13 years. And in keeping with the glorious traditions of the Indian cricket fan, each of his innings was being scrutinised and dissected. Every failure was viewed as a sign of waning powers, accusations rang rife, painting him as someone who was holding on to his place in the team because of his mindless pursuit of records the highest aggregate, most centuries … These ‘opinions on cricket sound oddly familiar! Do they not?

To add fuel to the caustic flames, Malcolm Marshall s express pace had sent him back for 0 and 7 in the first Test at Green Park as India had collapsed to an innings defeat. In the second innings, a Marshall delivery had jerked the bat out of his grip and flung it away quite some distance. And impatient voices had clamoured for him to call it a day.

When India won the toss and batted at Delhi, the years of service came a distant second to mounting pressure as Sunil Gavaskar took guard against Marshall, Michael Holding, Winston Davis and comeback man Wayne Daniel.

The pitch was largely lifeless, but that had seldom been a factor for the Windies pace machine. The start was shaky yet again, and soon India lost Anshuman Gaekwad, caught in the slips off Holding.

As Dilip Vengsarkar walked out to join Gavaskar, the latter decided to hit his way out of trouble. The approach can be fatal against bowling of that quality. But, boy! Did Gavaskar succeed!

The hook, kept religiously out of sight, folded away in the stores of memory since the early 70s, was suddenly brought out with royal flourish. The West Indian fast men continued to pitch short and Gavaskar hooked them again and again, finding the meat of the bat every time, and the balls kept disappearing past square-leg and long-leg. In a madcap exhibition of most daring hitting, the master sped to his fifty in 37 balls.

At the other end, Vengsarkar was at the peak of his powers, restrained in comparison, yet all style and elegance. A magnificent player of the drive, he used a lighter bat against the lightning quick Caribbean bowlers and got more runs with the cut. A short-arm pull off Holding demonstrated why years later the great bowler singled him out as the best Indian batsman he had bowled to.

Gavaskar curbed himself after the half-century, but the strokes kept flowing to all corners of the ground. The nation saw a new face of the accumulator. He was known to douse the fiery flames of speed with ice-cold temperament and technique. Now he had suddenly decided to meet fire with fire.

After three hours, with the score on 169 for 1, Gavaskar rushed to three figures off just 94 balls. He had smashed 13 fours and a six. However, the man was not aware that he had reached his century and thereby drawn level with the great Don Bradman s record of 29 hundreds.

It was left to Dilip Vengsarkar to shake his hand and mouth the now famous words, “Bloody hell, it s your 29th!”

Gavaskar celebrated his century with a six off part time spinner Larry Gomes. But, soon, he was out against the run of play, bowled by innocuous off-break of Gomes, while two very good and two great quick bowlers had failed to dislodge him.

It was 206 for 2 as he walked back to rousing applause, the ugly criticism that had rung around the nation till that morning already a thing of the past. He was a hero once again with a whole new dimension seldom glimpsed before. His 121 had come off 128 balls with 15 fours and 2 sixes. During the innings, he had also become the third man to reach 8,000 Test runs.

It took all of three Tests for the great man to be the target of national abuse yet again the centre of the vilification being that arena of sports lovers called Eden Gardens. But, Gavaskar answered them yet again with 236 in the final Test match at Madras. Well, thus goes the saga of Indian cricket fandom.

Vengsarkar remained unbeaten on 114 as India ended the first day at 299 for 3. The next morning he took his score to an impeccable 159 before being given out caught off his shoulder. India scored an impressive 464, and in spite of a hundred by Clive Lloyd, managed to obtain an 80-run first innings lead.

However, quick wickets in the second innings saw West Indies almost clinch the match on the last morning. Vengsarkar played yet another fine innings of 63 and the game seemed headed for a draw, but Marshall sparked life into it by picking up 3 wickets in 8 balls.

At 166 for 8 Madan Lal and Roger Binny halted the collapse and batted calmly for more than one-and-a-half hours to add 52. The final 314-run target was too much for the West Indians to attempt in just about 50 overs.

Vengsarkar won a well-deserved Man-of-the-Match award, Kapil Dev picked up 6 wickets in the first innings, and Wayne Daniel impressed all by capturing three wickets in each innings on his return to international cricket.

But, the match continues to retain a special place in memories due to the explosive brilliance of Sunil Gavaskar on that delightful first morning.

Man of the Match: Dilip Vengsarkar.

Sri Lanka-New Zealand third ODI to be played at Pallekele