WG Grace was on his second tour of Australia, leading Lord Sheffield’s XI in what would turn out to be an unsuccessful effort to retain The Ashes.

December 15, 1891. WG Grace was on his second tour of Australia, leading Lord Sheffield’s XI in what would turn out to be an unsuccessful effort to retain The Ashes. It was an eventful tour of highs and lows, where England dominated the tour matches and the third Test, but ended up losing the all-important urn. During the build-up for the first Test, 12 of Grace’s men took on 22 men from Bowral. Playing for the hosts was one Richard Whatman, whose sister Emily would later give birth to probably the most famous Australian ever. Abhishek Mukherjee looks back at the day when the Bradman lineage met the most famous British face of the Victorian era on a cricket ground.

Age had caught up with WG Grace. His bowling was a thing of the past. He still scored runs and perhaps matched the best in England, but he was no longer the undisputed champion. Still, he was remarkably quick for a man of forty-three, and when Henry North Holroyd (Lord Sheffield) approached him to lead the Englishmen on their journey to retain The Ashes, he agreed.

Grace had been to Australia almost two decades back, when he was at his prime. On a trip involving extreme logistic hurdles, disputes over payments, and some unexpectedly strong oppositions, Grace’s men did not have the best of experiences. It did not help that Grace did not treat his professionals in the best possible manner, and found ways to get under the skins of the hosts on numerous occasions.

The great man himself had not done too poorly. From 15 matches (all Second-Class) he scored 713 runs at 35.65, captured 65 wickets at 7.70, and snaffled 40 catches. The batting average, though impressive, was not out of the world.

Things had started well this time. The tourists halted (and played) at Malta and Ceylon en route Australia. In the scorching heat of Colombo, the Ceylonese crowd saw Grace walk (“that’s all right, I’m going anyway”) for the only known time.

The Englishmen began on a high note, thumping South Australia and Victoria by an innings. New South Wales gave them a run for their money (chasing 155 the tourists were 88 for 6), but George Lohmann and Bobby Peel saw them home.

The last match got over on December 7. The next match was scheduled on January 1. The tourists were scheduled to play 6 Second-Class matches in this interval, all of them odds-matches (where one side fielded more than 11 men).

In other words, there was almost a month of cricket without any opposition that would bother the tourists, and as was common knowledge, the only way to keep Grace soothed was competitive cricket.

As things turned out, Sheffield’s men fielded 12 men in each of these matches (though they played under the name Lord Sheffield’s XI, not XII), where the hosts had teams of sizes varying from 16 (Melbourne Cricket Club) to 24 (Bowral).

Against Cumberland, Grace insisted on fielding 12 men; the hosts insisted on 20 themselves, eventually settling on 19. At the toss, Kirby, the local captain, and Grace both claimed to have won the toss. Of course Grace did not back down, and Kirby had to give in.

As things turned out, there was not enough time to roll over Cumberland inside two days. Grace’s men bowled them out twice, but finished on 29 for 2 chasing 96.

Grace did reach Camden in a good mood. Camden XXII, however, had no chance, folding for 54 and 87 against Peel, Lohmann, Johnny Briggs, and Grace himself.

Then Lord Sheffield’s men travelled to Southern Highlands, New South Wales, for a small town that served as a summer recluse for those who wanted to escape the Sydney summer and had the means to afford it.

The station was not even a decade old, and gaslights were yet to make their way into the town, but Bowral was already growing in stature.

The Doctor and the Uncle

Richard Whatman was born in a farm in the Mittagong Range in 1867. Four years later came Emily, and four more years later, George. They were nine siblings in all.

Both Richard and George were passionate about the violin, as they were about cricket. A Bowral Cricket Club obviously formed with time, and both brothers led the club at various points of time.

When Arthur Shrewsbury’s men came over in 1888-89, they had crushed Bowral by an innings. The incomplete Bowral scorecards do not reveal a Whatman, though it is unlikely that 13-year-old George Whatman played. Maybe Richard did.

It was a two-day match, and Bowral, as mentioned before, fielded 24 men. It was probably justified, for Wisden would later refer to them as “a poor lot”. Thomas Graham, who had kept wickets against Shrewsbury’s team, was now captain, passing on wicketkeeper’s duty to one C Church. For some reason he decided to put the tourists in.

To be fair to Graham, his new-ball bowlers Wilshire and W Brennan did a decent job, taking four quick wickets between them. George Bean was run out, and the first five Englishmen to be dismissed managed a mere 14 runs between them.

But Octavius Radcliffe (23) was supported by Lohmann (16). Grace, batting low down the order, hurried to 46, while William Attewell remained unbeaten on 32. The tourists reached 156, which was more than sufficient for Bowral.

As things turned out, Bowral were bowled out for 77 by Briggs (12 for 46) and Attewell (8 for 29), who bowled unchanged. Fleeton and Harrigan, with 12 runs apiece, were the only ones to go past 7. Richard Whatman, our hero, batted at No. 21, and was bowled by Attewell for 1.

The 79-run lead was huge under the circumstances. Though the need was for quick runs, Grace, despite being the best man for it, held himself back. Some brisk hitting followed, and Grace set the hosts a near-impossible 144, Wilshire taking 5 for 35.

Barring Wallace (22) no one reached double-figures. Whatman, sent in at No. 20, was caught by Lohmann off Briggs for a duck.

As mentioned above, Australia regained The Ashes (or gained it for the first time) by a 2-1 margin, but this story does not deal with that. On a side note, Lord Sheffield donated £150 to New South Wales Cricket Association, which was used to buy a plate. The Sheffield Shield remains Australia’s premier domestic cricket competition.

Remember the sister of Richard and George? Emily Whatman met a farmer called George Bradman (oh, for John Arlott!), and they got married on December 16, 1893 — on the second anniversary of the second day of the match.

They had four children, Islet Nathalie, Lilian, Elizabeth, and Victor Charles before they sold the farm and moved to a small township called Yeo Yeo. Their fifth son, one Donald George, arrived in Cootamundra in 1908, sixty years after Grace was born in Bristol.

The family moved to Bowral in 1911, where the children went to Bowral Public School. When Grace passed away four years later, three months after little Don was down with a bout of measles.

It is not known whether he was already practising with a golf ball and a stump against a brick tank was still some time away. What is known, however, is that he would go on to become one of the few cricketers who would surpass The Doctor in stature. 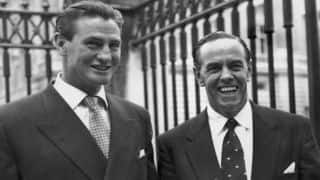