Why criticism of Misbah-ul-Haq has been extremely unfair

Why criticism of Misbah-ul-Haq has been extremely unfair

Not surprisingly, Misbahul-Haq’s bad form with the bat in the past three One-Day Internationals (ODIs) in the recent series against India has yet again given a chance to his critics to call for his head. 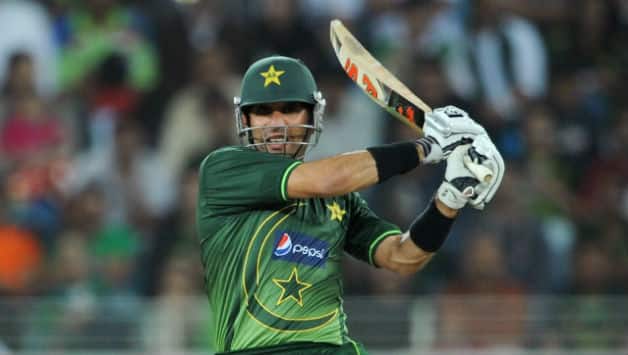 Misbah-ul-Haq  should keep leading Pakistan at least till the Champions Trophy this year, while the selectors keep looking for reliable middle-order batsmen © Getty Images

Not surprisingly, Misbahul-Haq’s bad form with the bat in the past three One-Day Internationals (ODIs) in the recent series against India has yet again given a chance to his critics to call for his head.

For example, Umair Qazi harshly criticises Misbah-ul-Haq, and suggests dropping him from ODI team. The criticism, however, appears to be superficial, because the author has not presented any concrete facts or statistics and merely takes into account the series against India to evaluate Misbah’s spot in the middle order. Surely, a player should not be dropped based on his performance in the last three matches alone, right?

It is important to take a closer look at Pakistan’s struggling middle order batting in ODIs over the past two years, and let us compare Misbah’s batting performance with his colleagues to get a better idea of the situation.

Following are the stats of other middle-order batsmen who are still in the current Pakistani ODI team (minimum 10 matches) during the same period:

Misbah is comfortably the leading run scorer with the highest batting average. Moreover, most of these runs were scored by him with the added responsibility and pressure of being the captain of the side.

During this period, he has been instrumental in significant number of victories. In 32 wins since January 1, 2011, his average is 61.17. This underlines his contributions with the bat. If you add  his ability to masterfully utilise the resources at his disposal in the field, you will probably be able to see his true value.

Let us look at the contribution of other batsmen with the same criteria:


The above figures clearly show that Misbah has been leading contributor in the matches which we have won over the past two years.

Admittedly, he has scored runs at a slower rate, but this is the role that he has defined for himself in the team. He is no Shahid Afridi or Virender Sehwag, who will score at more than a run-a-ball. His role is to prevent the usual Pakistani collapse by holding up one end and it is the other player’s responsibility to bat around him and help him out in tough situations.

Matches are not always won by a single player.

Had that been the case, India and the West Indies would have been hugely successful ODI sides in the presence of Sachin Tendulkar and Brian Lara, respectively.

He is not a Michael Bevan or a Steve Waugh; Misbah has had his share of bad performances, but he is still the best Pakistan have as shown by the above statistics. If you take away his performances and substitute it with another mediocre set, you might see the overall performance of our middle order dip considerably.

It is true that he looks ugly when he gets into that block-block rut, but every batsman has his weaknesses which can be worked on by talking to the coach and altering the game plan, which he should be able to do in forthcoming matches.

A more worrying thing for the team management (and fans) should be the dearth of skilful young batsmen in the middle order. Not even one young Pakistani middle-order batsman has impressed the world during the last two years as far as ODIs are concerned.

Umar Akmal is talented, but keeps throwing his wicket away at crucial moments (even after having a fair experience of 71 matches); Asad Shafiq has not done anything notable in the last two years in ODIs; Younis Khan has been below par; Azhar Ali looks promising, but it is too early to predict his future in ODIs.

All these batsmen have been given their fair chances during this time and none of them has been consistent enough. Yet, all the so-called critics find a way to criticise Misbah. They only blame him for all the ills of Pakistan’s middle-order batting.


It is true that we need to build a team for 2015 World Cup, but in my humble opinion Misbah should not call it a day – not yet anyway. He should keep leading the team at least till the Champions Trophy this year, while the selectors keep looking for reliable middle-order batsmen.

Youngsters in the team can still benefit from his calm leadership and overall experience.

(Raja Ghulam Rasool is a software industry professional based in Abu Dhabi. He tweets as @ghulamrasool1. The above article is reproduced with permission from www. http://tribune.com.pk/)

Niall O'Brien: Two divisions in Test cricket would be a great idea

Niall O'Brien: Two divisions in Test cricket would be a great idea