Stemming the mini-collapse and taking the team from 166 for five to the target of 262 exemplified the way Mahendra Singh Dhoni goes about his business. Arunabha Sengupta argues why his combined value as batsman-wicketkeeper-captain is an asset the nation has never known before. 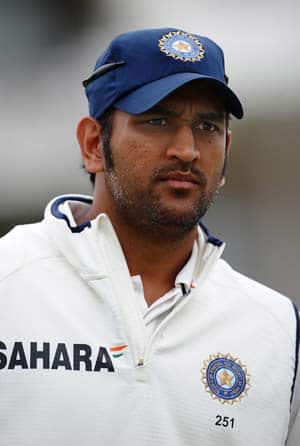 Indian cricket has never had a wicket-keeper who could double up as a genuine batsman in the manner of MS Dhoni. Add the phenomenal captaincy numbers to the equation and we have a gift to cherish, the like of which the nation has never seen before © Getty Images

Stemming the mini-collapse and taking the team from 166 for five to the target of 262 exemplified the way Mahendra Singh Dhoni goes about his business. Arunabha Sengupta argues why his combined value as batsman-wicketkeeper-captain is an asset the nation has never known before.

With the score reading 152 for two, Sachin Tendulkar played across the line to Tim Southee and the ball clattered into the stumps. At 158, Daniel Flynn pulled off a brilliant bat-pad catch to send back Cheteshwar Pujara. And eight runs later, Suresh Raina stepped out to Jeetan Patel and missed a straight ball.

At 166 for five, 261 seemed a long, long way off. Every sign foretold a familiar collapse under pressure. All but one of the established batsmen were back in the pavilion as the wicket-keeper came out to join the inexperienced man in the middle, with the lower order fidgeting in the dressing room. It looked as if the familiar panic would set in – perhaps a heroic blow or two before the final surrender – the tale of going down fighting.

But, Mahendra Singh Dhoni walked in, clubbed two sixes early in his innings, seized the initiative, modified the atmosphere charged with pressure and raindrops so that the strokes of Virat Kohli could flower at the other end. Victory arrived with a degree of ease that jarringly contrasted with the keen see-saw battle of the four days. It was all too calm and comfortable in the end.

In the first innings, Raina and Pujara had scripted a spirited fight-back, but Dhoni had to walk in at an uncomfortable 179 for five, the New Zealand total of 365 not even half traversed. He had departed at 312 for seven, for 62 crucial runs.

Yes, Pujara and Virat Kohli deserve all the credit for the two centuries in the series. And Pragyan Ojha and Ravichandran Ashwin for the webs they spun to trap Kiwi batsmen, but Dhoni’s quiet, reassuring presence was no less vital a factor for the brace of Indian victories.

The value of Dhoni in the line-up

After the debacles of England and Australia, there grew an understandable chorus raising questions about Dhoni’s continuation as captain, even his place in the team. In the mad rush of headlines, sound bytes and fan-speak, such reaction is inevitable.

However, the value of Dhoni can only be properly assessed only when we manage to unfetter our memories from the chains of the instant and project it back into the era before him. The days when in similar match-threatening situations, with the balance precariously tottering on thin edge, we would be graced by the rather unnerving sight of a Nayan Mongia and a Kiran More walking in, the country joining hands to pray for a miracle.

For a nation perennially used to wicketkeepers moulded in the ‘can-bat’ cast, Dhoni came in as the pivotal factor, making those rare miracles common-place affairs. Never before India have had a wicket-keeper who can do a decent job when standing up to the spinners on the treacherous home tracks and also hold his own as a regular batsman.

To put this in perspective let us look at Dhoni compared with the regular wicket-keepers of the past.

It is evident from the figures that Dhoni stands head and shoulders above the rest. Syed Kirmani, More and Mongia were all reasonably good with the bat, but imagination would be stretched to the limits to categorise them as genuine batsmen. Even Farokh Engineer and Budhi Kunderan, who regularly opened the innings for India, neither boasted an average close to Dhoni’s, nor managed big scores with the same regularity.

The balance that Dhoni’s superior batting ability brings to the side has more than often been translated into the winning edge.The claim that Dhoni can hold his own as a batsman is not an idle one. His opportunities of batting up the order have been limited, but the eleven times he has come in at No 6 has seen him score at 57.55.

Leading from the front

All this comes on top of the value he brings with his leadership – which has placed him on the brink of becoming the most successful Test captain of India, currently boasting a win-loss ratio well ahead of any other Indian skipper.

With a World Cup apiece in each of the shorter formats of the game, and with his reputation as one of the best finishers in overs-limit cricket, Dhoni is beyond the tentacles of even the most unreasonable critics in that arena. However, as mentioned earlier, his place in the Test side has been questioned in recent times.

Following the eight consecutive losses to England and Australia, seven of those Tests led by Dhoni, many critics, Sourav Ganguly in particular, had raised several questions about his captaincy.

Ganguly pointedly argued that given the performances of Dhoni, his place in the team was not assured, and Gautam Gambhir and Virender Sehwag were projected as more suitable men for the job. There were accusations that he did not lead from the front.

One struggles to understand the thought process behind the claims. The entire case against Dhoni is built on his failure in the two tours, and the logic collapses spectacularly when we look at the figures of the suggested replacements.

If we open our windows wider than the last two tours and look at his entire captaincy period, the following two tables give an indication of how Dhoni has led from the front. As in the tale of woes above, during his entire tenure at the helm, he enters groups dominated by formidable batsmen while continuing to don the gloves of a wicket-keeper.

India, as we have noted, has never had a wicket-keeper who could double up as a genuine batsman in the manner of Dhoni. Add the phenomenal captaincy numbers to the equation and we have a gift to cherish, the like of which the nation has never seen before.

As in the recently-concluded series, he goes about his job quietly, without parading elation or dismay, letting his achievements speak for him.

And as in the case of such quiet performers, his absence will be felt once he departs from the scene. Till then, the country can count the blessings as long as the ice-cool man goes out to toss the coin, to perch behind the wicket, and to add substance to the batting order.
(Arunabha Sengupta is a cricket historian and Chief Cricket Writer at CricketCountry. He writes about the history and the romance of the game, punctuated often by opinions about modern day cricket, while his post-graduate degree in statistics peeps through in occasional analytical pieces. The author of three novels, he can be followed on Twitter at http://twitter.com/senantix)