MS Dhoni would have been a happy man after seeing his side beat Zimbabwe by 9 wickets and KL Rahul scoring a debut hundred.

MS Dhoni‘s young brigade began their campaign against Zimbabwe at Harare with a clinical win by 9 wickets. An all-round performance by Team India’s second-string side made their first victory look like a convincing as well as a comprehensive one. But what made it even more special was a hundred on debut by KL Rahul — who brought it up with a colossal six over deep mid-wicket — finishing the match in style. Captain Cool would have been pleased with the manner in which his inexperienced team won, as we all know that he is a man who believes in the process more than the results. FULL CRICKET SCORECARD: India  vs  Zimbabwe , 1st ODI Match at Harare

Dhoni has two big responsibilities on his shoulders apart from just winning the series and proving his worth as a captain to the critics. First, there are a number of players in the side, who are itching to cement a place and make it count. Dhoni has to try and give each one of them a chance (or at least a debut match), so that the reason behind featuring a young team to Zimbabwe is done justice with.ALSO READ: India vs Zimbabwe 2016, 1st ODI at Harare: Jasprit Bumrah’s 4-28, KL Rahul’s debut ton and other highlights

Second, there are a few players with whom Dhoni hasn’t played ever. And, as he said he will have to analyse the strengths and weaknesses of those players. “I will have to quickly assess what their strengths are; and at the same time, depending on the team composition, what is the best possible slot or best possible manner the individual can be utilised,” Dhoni said before leaving for Zimbabwe. ALSO READ: After Tests, KL Rahul announces himself in style at ODI circuit

Keeping that in mind, Dhoni would have been impressed with the way India fared in the opening contest. The bowlers displayed an excellent show. Barinder Sran and Dhawal Kulkarni started off the proceeding by making early inroads. Jasprit Bumrah, on the other hand, made matters worse for Zimbabwe with his match-winning four-for. Moreover, the spinners bowled well in tandem. Dhoni, more importantly, would have been proud with the way his brigade worked as a cohesive unit.

The batsmen complimented the stellar efforts put up by the bowlers. Rahul’s hundred on ODI debut took the cricketing world by storm. But, again, the manner in which he carried his innings, not giving his wicket away and making most of the moment was commendable. Undoubtedly, he lived up to Dhoni’s expectations. Perhaps, the finishing stroke to reach the milestone would have been something Dhoni would have loved, for we all know whose trademark that is. 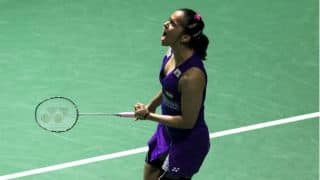