"The last bowler to be knighted was Sir Francis Drake," Arthur Mailey had quipped in exasperation in 1956, hinting at the bias towards batsmen while conferring the honour. However, even now the equation is heavily tilted against the bowlers as far as being touched by the royal sword and being pronounced a Knight is concerned. Arunabha Sengupta looks back at the knights in cricketing flannels and points out how skewed the numbers are. 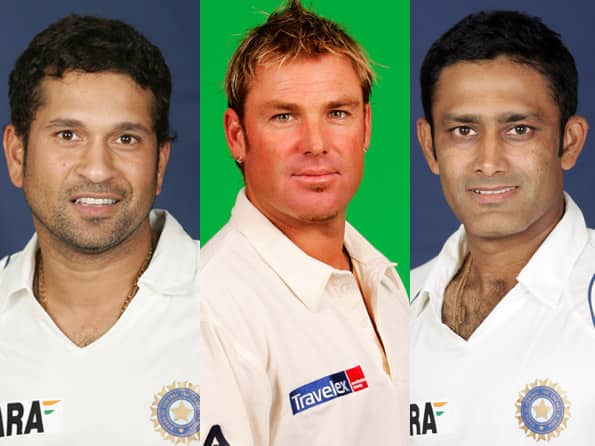 “The last bowler to be knighted was Sir Francis Drake,” Arthur Mailey had quipped in exasperation in 1956, hinting at the bias towards batsmen while conferring the honour. However, even now the equation is heavily tilted against the bowlers as far as being touched by the royal sword and being pronounced a Knight is concerned. Arunabha Sengupta looks back at the knights in cricketing flannels and points out how skewed the numbers are.

It is a common complaint among cricketers, especially whose tool of trade is more the leather than the willow, that the game is unfairly loaded in favour of batsmen.

It is the runs – fours, sixes, fifties and hundreds – that the spectators cheer lustily. There may be a smattering of applause may sometime reward the maiden over, when the ball rises threateningly, streaking narrowly past the batsman’s helmet or goes past the off-stump after pitching outside leg. But, on the whole, the hard work of running in to bowl over and over again is generally restricted to a maximum of 40 possible bouts of hand clapping at the fall of wickets – half of that in the limited overs matches – that too, divided among all the bowlers in the two teams.

The cricket chroniclers over the ages have been more prolific in waxing eloquent about the adventure stories scripted by the bat than the tales of the wily wonders of the ball.

One look at the list of cricketers to have been knighted purely because of their exploits on the field also tells us of the major imbalance.  The bowlers number a pitiful three, and apart from Alec Bedser, the others – Gubby Allen and Richard Hadlee – can easily qualify as all-rounders. There are four times as many genuine batsmen who have been touched by the royal sword and asked to arise as ‘Sir’.

Garfield Sobers is there as the knight with one of the shiniest armours, but his 8032 runs quite easily outweigh the 235 wickets.

And while two other iconic all-rounders were arguably better as with the ball than the bat, Ian Botham was knighted for his services to charity and Learie Constantine for his work as a lawyer, politician and diplomat.

Maybe the gladiatorial outfit of the men scoring runs – with helmets protecting the head, the pads shielding their legs, gloves and elbow guards guarding their arms, the bat held proudly much like a lance of the olden days – make it easier for us to equate the batsman with a knight of the medieval era. However, if by that analogy the toilers with the ball are relegated to the level of evil dragons of mythology, slain by the gallant cavalier heroes, not everyone is amused, least of all the bowlers.

When the English opening batsman Len Hutton was pronounced a Knight of the British Empire for his services to the game in 1956, former Australian leg-spinner and journalist Arthur Mailey was frustrated enough to remark, “Congratulations, Sir Leonard, but I do hope that the next time it is a bowler. The last bowler to be knighted was Sir Francis Drake.”

The last quip was in relation to the apocryphal anecdote about the Vice Admiral of the British fleet. The story goes that Sir Francis Drake had been enjoying a game of bowls on Plymouth Hoe when the Spanish Armada launched their attack in 1588. The British ultimately won the battle of the sea, but according to legend, when news of the advancing armada reached him, Drake remarked that there was plenty of time to finish the game before defeating the Spaniards. In the retelling of the story by modern day historians, the last remark by Drake is often coloured by description of footwork and anatomical specifications.

Don Bradman was knighted in 1949, and while no one can possibly dispute his credentials, the bowlers he considered the greatest of his times – Bill O’Reilly, Hedley Verity and others – did not manage to feature in the royal list. Bradman remains the only Australian cricketer who has received the honour.

Going down the list of Englishmen who have been knighted purely based on their on-field cricketing deeds, we run across Jack Hobbs, Len Hutton and Colin Cowdrey, peerless batsmen of unquestionable pedigree. Gubby Allen, as mentioned, does make the cut, but again, that has as much due to his cricketing feats as his administrative brilliance.

While Sir Don’s immense respect for Alec Bedser may have been instrumental in enabling the great medium pacer to break into a batting bastion, the award was conferred only in 1996, almost four and a half decades after he had hung up his boots – 40 years after Mailey’s words of aggravation.

When we turn to the colourful Caribbean islands, we read the names of the three Ws – Frank Worrell, Clyde Walcott, Everton Weekes – the legendary Gary Sobers, the charismatic Vivian Richards and the first in a long line of dominating opening batsmen, Conrad Hunte. While the above list can be combined into one of the most fearsome and formidable West Indian batting line ups, we notice the glaring omissions of the great pace bowlers produced by the islands over the years, as well as the tweaking trio of Sonny Ramadhin, Alf Valentine and Lance Gibbs.

Richard Hadlee, quite deservingly, is the only New Zealander in the list. Memories of his rhythmic twenty two step run up to the wicket followed by wicked deliveries which darted, deviated and deceived the best of batsmen will no doubt gladden the hearts of the legions of bowlers, but his more than decent record with the bat will make them wonder how much the honour had to do with the accomplishments of the ball alone.

Although Indians cannot officially accept the title since 1947, we find that Maharaja of Vizianagram, Vizzy, was proclaimed a knight by King Edward VIII in 1936. The fame of his royal highness as a cricketer was quite deplorably limited to presenting lavish gifts to bowlers in exchange for long hops, sending Lala Amarnath back to India during the 1936 English tour due to ego clashes, and luring Baqa Jilani with a Test cap to insult CK Nayudu at the breakfast table. Hence, we can safely conclude that the honour little to do with his services to the game. The reasons are fuzzy and best swept under the royal carpet of the days of the Empire.

There have even been knighthoods dealt out for services to cricket rendered off the field as well.

In 1926, Francis Lacey was knighted chiefly for his work as the secretary of the MCC Frederick Toone joined the select club in 1929 as a cricket administrator of note. In 1953, Henry Leveson Gower received the honour because of his contributions as a legislator and cricket selector. And Neville Cardus, the virtuoso wordsmith who raised the art of cricket writing to the level of literature, was conferred the laurel in 1967 as much for his musings on cricket as for his critical pieces on music.

Tragically, even these men operating away from the field of action outnumber the bowlers for the honour. The list cries for the inclusion of names of the great men over the years who have made the ball talk in eloquent rhetoric.

Till the equation is corrected, one cannot complain if a young child walking out to take the field in his first cricket match against rivals down the lane keeps dreaming about becoming a Sachin Tendulkar rather than a Shane Warne or an Anil Kumble.

Below is a list of the knighthoods conferred for services to cricket:

Sir Donald George Bradman in 1949 for services to cricket.

Sir Frederick Charles Toone in 1929 for services to cricket.

Sir Pelham Francis “Plum” Warner in 1937 for services to cricket.

Sir John Berry “Jack” Hobbs in 1953 for services to cricket.

Sir Leonard “Len” Hutton in 1956 for services to cricket.

Sir Alec Victor Bedser CBE in 1996 for services to cricket.

The Rt Hon. The Lord Cowdrey of Towbridge in 1992 for services to cricket.

The Rt Hon. The Lord Constantine in 1962, primarily for his work as a lawyer, politician and diplomat.

Sir Conrad Cleophas Hunte in 1998 for services to cricket.

The Hon. Sir Garfield St Aubrun “Gary” Sobers in 1975 for services to cricket.

Sir Clyde Leopold Walcott in 1993 for services to cricket.

Sir Everton de Courcy Weekes in 1995 for services to cricket.

Sir Frank Mortimer Maglinne Worrell in 1964 for services to cricket.

Sir Richard John Hadlee in 1990 for services to cricket.

(*Vizzy, Ian Botham and certain other cricketers have received the honour for non-cricketing reasons and have not been included in the list.)

Pakistan elect to bat in third Test against England in Dubai

Too much focus on Twenty20 cricket affecting Harbhajan: Saqlain