When he walked out to bat in the World Cup final, MS Dhoni already boasted an average-strike rate combination that ranked with the best ever. Before that innings, he had scored 5958 runs at 48.04 and a strike rate of 87.22. Now, 21 months later, his figures stand at 7215 runs at 52.28 with a strike rate of 88.28. The numbers prove Dhoni has raised his game even as Indian cricket slumped since the World Cup. An incisive piece by Arunabha Sengupta. 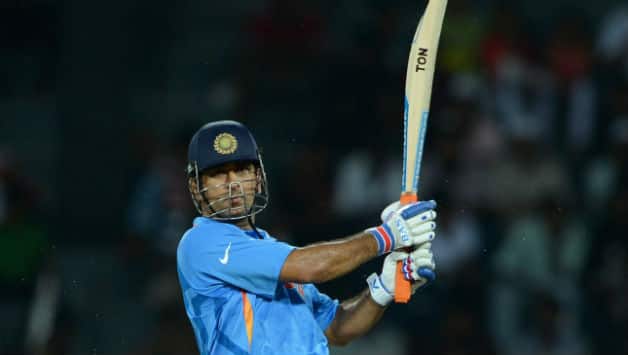 When he walked out to bat in the World Cup final, MS Dhoni already boasted an average-strike rate combination that ranked with the best ever. Before that innings, he had scored 5958 runs at 48.04 and a strike rate of 87.22. Now, 21 months later, his figures stand at 7215 runs at 52.28 with a strike rate of 88.28. The numbers prove Dhoni has raised his game even as Indian cricket slumped since the World Cup. An incisive piece by Arunabha Sengupta.

The third Indian wicket had gone down, the World Cup final still tantalisingly balanced on a knife’s edge. As Virat Kohli walked back, the millions of followers around the world expected Yuvraj Singh to walk out – the man who had been in impeccable form. However, promoting himself up the order in an act that trespassed the most audacious boundaries of  boldness, captain Mahendra Singh Dhoni came in to bat, indulging in perhaps the biggest gamble in his life. The entire tournament had seen him scratching around for runs, with a string of low scores leading up to the match. A quick dismissal would brand him eternally as the national villain, burned on the stake of fanaticism in a cricketing-crazy country known for its extremes.

The rest is history. While time remains frozen in that six over long-on that got India the World Cup after 28 years, the man behind the triumph is perhaps characterised by his own reaction after that stroke. A smile did flicker through, but it was brief and restrained. A stump was collected, but more as a memento to cherish than a trophy to be flaunted.

Defeat was not an option in the scheme of things with the head conspicuously on the block with critics lying in wait with their jagged instruments. That 91 off 79 balls could have gone down as the most remarkable innings ever played under monumental pressure. It does not go down as one because the man who played it seemed insulated from the blazing heat of the moment, beyond the reach of the frenzied pressure that could deform an impressionable mind forever.

In a country where melodrama, aggressive gestures, glaring eyes and swinging garments go a long way in underlining perceptions of greatness, Dhoni has continued in the same calm, unassuming way since then. With silent assurance, the runs he has amassed in the shorter format of the game since that World Cup final have been nothing short of incredible. Much of it has passed the world by without raising too many eyebrows.

However, if we pause a while to take a look at the figures since that spring evening at the Wankhede, the numbers speak out loud and eloquent, enough to ring above the deafening clamour of chaos that pervades the cricket following space.

From that pivotal day, Dhoni has played 31 matches, scoring 1257 runs. Virat Kohli, Kumar Sangakkara, Mahela Jayawardene, Alastair Cook, Mohammad Hafeez and Dinesh Chandimal have scored more. However, what distinguishes Dhoni are the phenomenal average and strike rate. When these two defining parameters of a ODI batsman are considered as a combination, no one comes remotely close to challenge Dhoni’s supremacy in the last couple of years.

As we can see, the nearest in terms of average is the man in stupendous form – Hashim Amla. And even he scores a good 21 runs per innings less than Dhoni.

While Shane Watson and Suresh Raina manage a strike rate better than him and David Hussey and Kieron Pollard come close, they fall well short of reaching half of Dhoni’s average.

And if one tries to argue that this is the result of the multiple not outs one can manage as a number six batsman, let me point out that during the same period Dhoni averages almost twice as much as the next man at number six.

Another common accusation is that Dhoni makes his runs on flat pitches and fails miserably on foreign tracks.

The following table will tell us that Dhoni’s brilliance has determined the fate of Indian cricket during the period. His performance in matches in which India has triumphed has been phenomenal. In the rest of the matches, he has performed somewhat less brilliantly, although head over shoulders above the rest of the ODI World.

When he walked out to bat in the World Cup final, Dhoni already boasted an average-strike rate combination that ranked with the best ever. Before that innings, he had scored 5958 runs at 48.04 and a strike rate of 87.22.

He has moved from great to greater – all that while batting is only a part of his main job, if we take wicket-keeping and leading the side into consideration.

It remains to be seen whether he can continue this dream run for much longer, but there are already sufficient arguments to rank him as the best ODI batsman ever.

A cynic's guide to India's "Do Nothing Different" philosophy