Wicketkeeping in cricket is an art in itself. And MS Dhoni seems to be a master of it.

March 23, 2016. India are defending 147 at the M Chinnaswamy Stadium in Bengaluru against Bangladesh, in their third match of the ICC T20 World Cup. Bangladesh in reply are cruising nicely at 68 for 2 in 9.2 overs. As a part-time spinner, Suresh Raina comes onto bowl. The third ball of the over is bowled to Sabbir Rahman — a fine stroke-player leading Bangladesh’s run-chase with 26 not out off 15 balls. Raina bowls a wide delivery down the leg-side to the right-hander who tries to flick but misses, and instead, loses balance as the momentum of the shot brings his back foot out of the crease. His feet are in the air for about 0.35 seconds, as estimates would later reveal. (It takes about 300 to 400 milliseconds for an average human eye to blink!) But in that span, MS Dhoni has lit up the LED bails after collecting the ball, reacting both expeditiously and sagaciously.

The third umpire subsequently declared Sabbir OUT, but what fans watching the game on TV saw, was perhaps never seen ever before.

Though, the genius inside Dhoni is not unknown to the world.

And while, I get into the details of what Dhoni’s capabilities are behind the stumps, let me notify you that this article will not get into the debate of whether Dhoni is one of the all-time best or not, for I feel that is a different discussion altogether, and I have always believed that cricketers should never be compared. They are all unique and special in their own way.

Nonetheless, this piece might answer the question — if he is the quickest or not, and that too, while keeping aside his catching skills and perhaps the most unbelievably deadly characteristic of his wicketkeeping — his flick-on run-outs from the throws by his fielders.

Wicketkeeping in cricket is an art in itself. And Dhoni seems to be a master of it. He is street-smart as they call it. And, unorthodox, a trait even he himself admits. Only this year in the IPL, he showed one of his classic yet bizarre moves while wicketkeeping. As Manan Vohra, got in position to play a late dab against Ankit Sharma’s short delivery, Dhoni anticipated it and pulled out his right leg to stop the ball right in front of him. WATCH: IPL 2016: MS Dhoni shows off neat footwork in KXIP vs RPS, Match 10 at Mohali

From what can be incurred on watching the footage of the incident multiple times is that, not only Dhoni’s prolepsis is worth acknowledging. His body is in the right place, his stretched out leg is doing what he wanted it to do, and his hands are still where they should be. If Vohra would have missed the ball, there is absolutely no doubt Dhoni would have had it in his gloves. This is just an instance of how he, with his own game sense — which is terrific to say the least — tries being simple. Tries being Dhoni.

Moving on, stumping is a critical chunk of wicketkeeping. And Dhoni, quite obviously has  mastery in it too. But then, there are enough reasons to prove why Dhoni is what he is behind the three stumps and the two bails (the most critical element in his act).

We have known for long that wicketkeepers should provide cushion to the ball as they complete a take off the spinners. But Dhoni’s hands stay almost at the same place or they move forward when he takes the ball. This innate skill is probably the first reason as to why Dhoni creates a stumping chance quicker than his peers, as opposed to those who just complete the stumping after the batsmen has been beaten and is out of the crease. Mind here, the batsman might not have done too much wrong in most of Dhoni’s stumping dismissals. READ: MS Dhoni surpasses Kumar Sangakkara to register most stumpings in international cricket

The second reason is that Dhoni has improved tremendously in terms of wicketkeeping. When he arrived at the international arena, he was an ordinary wicketkeeper. He, like almost all of India’s wicketkeepers in the last decade, had problems while facing Anil Kumble as well. Kumble’s bounce and low-flighted quick deliveries did pose a problem for Dhoni. But he grew with experience and rose to become an idol for those wanting to become a wicketkeeper-batsman.

His quickness and whip-smart game sense are often on display in the limited-overs format. Add to it his outrageous presence of mind and he becomes a huge threat for the batsman. Calling him a Ninja, will not be a mistake. WATCH: MS Dhoni keeps wicket with only one glove

And in spite of possessing such remarkable skills, when commentator Harsha Bhogle, at the post-match interview after one of India’s T20 match against Sri Lanka, asked about his excellent night behind stumps, a modest Dhoni replied, “Being a bit unorthodox, behind the stumps really helps but the credits goes to the bowler for beating the batsman.” If you think Dhoni was at his altruistic best here, let me tell you that this is perhaps the only time he has mentioned about his wicketkeeping skills.

As Dhoni’s fans fear the day he would say goodbye to cricket, some things are certain. India, might never find, a better wicketkeeper-batsman than Dhoni, and his fans might never forget the memories he will leave with from behind the stumps.

And when he goes, the comparisons between the speed of light and his stumpings might continue. His hilarious comments from behind stumps might become a part of archival history. The sound of his almost judgment-like appeal to the umpire with one hand up shouting ‘Owaizay’ (Howzat!) or even his celebratory ‘Oh Yes’ will still bring a smile on the faces of his fans. But Dhoni the illusionist behind stumps will live on, forever.

Dhoni’s stumpings are always a joy to watch! 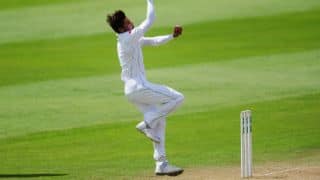 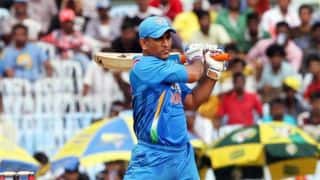