Indian strategy to use spin to overcome the Englishmen is clear from the voices doing rounds as well as the selection of the teams for tour matches. Arunabha Sengupta analyses figures and wonders whether it is prudent to go for a three spinner approach during the series. Ravichandran Ashwin (left) and Pragyan Ojha (right) are certain to lead the Indian spin attack, but there are compelling numbers to suggest that a third spinner would bring about greater potency to the Indian attack © Getty Images

Indian strategy to use spin to overcome the Englishmen is clear from the voices doing rounds as well as the selection of the teams for tour matches. Arunabha Sengupta analyses figures and wonders whether it is prudent to go for a three spinner approach during the series.

There are talks of revenge echoing loud and clear from all corners.

The prevailing thought is to do unto others as others have done unto us. Rank turners are in vogue, as fitting response for green pitches on which we were tortured to despair. Established pillars of the team as well as rank newcomers have all voiced the same sentiments. And the comments have been met with mixed reactions.

On one side there are arguments that emphatically want to cash in on home advantage with a predominantly spin attack on tailor-made tracks for them. These are people that live for the moment, without a care about the long-run damage by such a lop-sided approach. They feel that looking towards the distant future at the cost of the immediate present is downright stupid.

A few months earlier the Australians and Englishmen were beating us black and blue with conditions carefully tailored to suit the best of their bowlers. Were they in any way looking at preparing spinning pitches for their batsmen to be nurtured in view of some distant tour of the subcontinent? Is there any side in the world that does not benefit from home advantage? Besides, who said Test cricket should be played only on fast bouncy tracks and turners need to be relegated to second or third class status?

There are pros and cons that can be discussed for eternity, and like any cricketing issue in fan-space, no concrete conclusion will ever be reached.

However, it is a fact that most teams have thrived under home advantage. And Indian cricket did turn a crucial corner from the 1990s by exploiting the weakness of visiting teams against turning deliveries on surfaces where the first ball on the pitch results in puffs of dust.

And with the India A side selected without any spinner, the strategy of the Indian think tank is very obvious. Spin is the mantra that will cast spells around the visitors, and extract our desired pound of flesh.

The question that crops up is: If India is going all out for decimation with spin, does it make sense to play three spinners? Or, instead, do we stick to Ravichandran Ashwin and Pragyan Ojha and play two pace bowlers – one for reversing it as the ball gets older and the other to add glamour to the fine leg area?

If we look at the turning point of Indian home Test record, it started in the days of Mohammad Azharuddin. He usually steadfastly stuck to Anil Kumble, Venkatpathy Raju and Rajesh Chauhan as his three-pronged spin attack. On rare occasions the off-spinner’s role taken up by Ashish Kapoor or Nikhil Chopra.

The results were more than good. He won 11 of the 16 matches played with three spinners since 1993, and lost just two. On the other hand, when he switched to the two spinner policy, he won, lost and drew one Test match apiece.

But then, Azharuddin was helped for long by the presence of pace-bowling all-rounders, initially Kapil Dev and then Manoj Prabhakar, whose batting prowess enabled an extra slot for a spinner. However, since 1999, the formula changed to two pacemen, two spinners and six batsmen – three spinners taking the field very rarely. The role of the third spinner was performed with a lot of gusto, and some success, by the likes of Sachin Tendulkar, Virender Sehwag and, more recently, Yuvraj Singh and Suresh Raina.

Let us look at the numbers to find out which approach has been more successful.

In the following table we take a look at the performance of the team with two and three spinners in the side since the England tour of 1992-93.

It also includes the only Test match at Mohali in 2005 when India for some reason went in with Anil Kumble as the sole spinner, and could not dislodge the last five Pakistan wickets on the final day to force a win.

To ensure unbiased inference, we have also removed the matches against the minnows during this period.

Spinners played by India in Tests since 1993-93 and the associated results:

The numbers do speak very eloquently about the merits of the three-spinner approach. The win-loss ratio comes down from 5.66 to 2.17 when the combination changes from three spinners to two.

Lest one infers that this is skewed due to the dust bowls of the 1990s, let us note that even after 2000, the three spinner ploy has served the side well whenever used.

Playing three spinners has brought the series-clinching victory in Chennai against Australia in 2001, and has also allowed India to win against England at Mohali in 2006 – the final time such a team structure was used. Since 2000, India has won three, and drawn and lost one Test apiece while playing three tweakers simultaneously.

True, Yuvraj picked up five wickets for India A, but depending on his bowling to win Tests for India is far from the ideal strategy, especially given all that he is been through in the past year.

England had loaded their team with four fast men while trouncing India on the fast, seaming surfaces at home. And now, one can feel their tremors at the mere mention of spin.

The moment seems rather opportune for a third spinner in the form of Amit Mishra, or even Harbhajan Singh, to join forces with Ojha and Ashwin with a few opening overs entrusted to Virat Kohli.

It’s a sight to behold to have Sachin Tendulkar & VVS Laxman play domestic cricket in their whites! 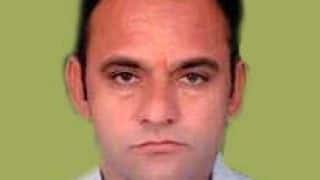