On May 6, 1954 at Iffley Road Track in Oxford, Dr Roger Bannister created history when he became the first human to run a sub-four minute mile — his time being 3 minutes and 59.4 seconds.

What is once perceived seemingly difficult is emulated and even bettered with regularity, once the metal barrier is broken.  H Natarajan explains why Sachin Tendulkar’s 200 is like Dr Roger Bannister first sub-four minute mile run by a human and why presents compelling numbers to say it’s only matter of time before a batsman  scores 300 in One-Day Internationals.

On May 6, 1954 at Iffley Road Track in Oxford, Dr Roger Bannister created history when he became the first human to run a sub-four minute mile — his time being 3 minutes and 59.4 seconds. To the uninitiated, running the mile under four minutes was deemed impossible. Scientists and medical doctors were convinced that the human body was not designed for attaining such a time.

Besides being an athlete, Bannister was himself a medical doctor — a distinguished neurologist. He once said that he was prouder of his role in academic medicine through research into the responses of the nervous system than his iconic athletic achievement.

What Bannister did that day in 1954 at Oxford was to shatter limitations placed upon the human mind. And how powerful that breaking of the barrier was could be appreciated by what happened in the immediate future and in the years to come.

Just a month after Bannister set the phenomenal mark and busted the “impossible” tag attached to the mark, the mark was bettered by his Bannister’s rival John Landy in Turku, Finland, with a time of 3 minutes and 57.9 s, which the International Amateur Athletic Federation (IAAF) ratified as 3 minutes 58.0 s due to the rounding rules which prevailed then.

On August 7, in the 1954 British Empire and Commonwealth Games in Vancouver, Bannister pipped Landy at the post in a race billed as “The Miracle Mile” to regain the record. Bannister won in 3 minutes 58.8 second, with Landy 0.8 s behind in 3 minutes 59.6 s.

John Walker (New Zealand) was the first man to run the mile under 3:50 while American Steve Scott has run the most [136] sub-four-minute miles. The current record is 3:43.13 by Morocco’s Hicham El Guerrouj who ran a time of 3:43.13 in Rome in 1999 — supremely better than Bannister’s first sub-four minute mark. Yet, it was Bannister who broke the shackles of the mind by disproving doctors and scientists.

In many ways, Sachin Tendulkar is the Dr Roger Bannister of One-Day International (ODIs). It was he who smashed the barriers that were placed in the minds of batsman about scoring a double hundreds in ODIs when he scored an undefeated 200 against South Africa at Gwalior on February 24, 2010. The double hundred came after 2961 ODIs and almost four decades after the first ODI was played. And this despite the fact that for a long time the overs-limit was 60 overs, unlike the standardised 50 overs now.

Following the Gwalior epic by Tendulkar, the floodgates opened. A little over a year later, on December 8, 2011, Virender Sehwag scored 219 against the West Indies at Indore.  Then, on November 2, 2013, Rohit Sharma joined the exclusive club by scoring 209 against Australia at Bangalore. A year later, Rohit did it again! This time he plundered 264 against Sri Lanka at Kolkata on November 13, 2014 — moving from 200 to 250 in just 15 balls! Just let these stats sink in your mind: Rohit’s 263 came off 173 balls, while in 1975 Sunil Gavaskar scored 36 not out off 174 balls against England in the inaugural World Cup in 1975! The runs that Gavaskar took while batting through 60 overs has since been scored in a single six-ball over!

The highest score in World Cup history stood in the name of Gary Kirsten who had scored an unbeaten 188 against the United Arab Emirates at Rawalpindi on February 16, 1996. Kirsten’s record lasted 19 years and eight days when Chris Gayle scored 215 against Zimbabwe at Canberra.  But Gayle’s World Cup record lasted 25 days. The Jamaican got view from inside the ground when Martin Guptill smashed an unbeaten 237 against the West Indies at Wellington — the fifth double hundred in five years. Phenomenal!

All the double centurions thus far —Tendulkar, Sehwag, Rohit twice, Gayle and Guptill — have been openers. It means they get to bat from the start of the innings. The stats thus far indicate that scoring a double hundred for a non-opener is not in the realms of possibility. But it would be foolish to think that what has not been achieved thus far cannot be achieved in the near future — especially when there is freak with divine blessings called AB de Villiers who has to his credit the fastest 50, 100 and 150 in ODIs.

What next? Is three hundred by a batsman a possibility? In my mind, that is clearly doable, and for good reasons. Consider this: In the World Cup match against the West Indies at Sydney in the recent World Cup, AB de Villiers came into bat with just two balls of the 30th over remaining. Technically, he had 20.2 overs to bat. But when South Africa’s innings finished, de Villiers was 162 not out! Imagine the possibilities if this man decides to turn into an opener one day! He can tear apart the best of bowlers.  Jason Holder had figures of 5-2-9-1 at one stage in the World Cup game against South Africa. And then he came against the force of de Villiers and ended up with figures of 10-2-104-1 — 95 runs in five overs! Legalised mayhem!

When de Villiers scored the fastest hundred – in 31 balls — against the West Indies a few months ago at Johannesburg, he came into bat with just 69 balls of the innings remaining. Yet he finished with a mind-boggling 149 not out off just 44 balls!!! His strike-rate was 339!

With the modern bats acting as weapons of mass destruction in the hands of the batsmen a triple century in ODIs by a batsman will happen in the not so distant future. And the man most likely to dismantle that barrier in the mind is most like to be AB de Villiers. 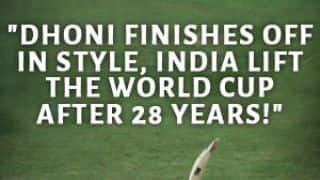 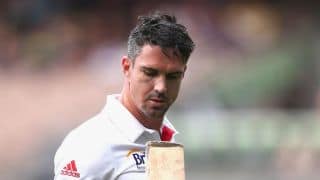