it’s a performance around which he can build his legend. 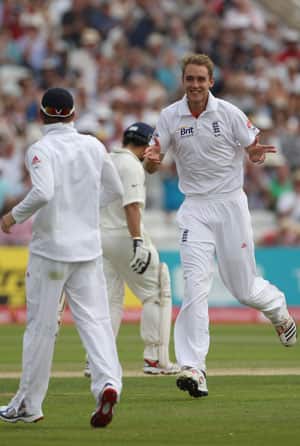 Unless Stuart Broad wins the Ashes series single-handedly for England, he will not be considered in the same league of Ian Botham © Getty Images

It has taken Stuart Broad roughly seven days of Test cricket to flatten India. If he can hold up his performance for the second half of this Test; the series can be safely labeled Broad’s Pataudi Trophy. Of course it does not have the ‘Botham’s Ashes’ feel to it, but it can be safely said that Stuart Broad has finally arrived.

Rahul Dravid notwithstanding, a Virender Sehwag-less Indian batting line-up is a pale shadow of the one that tamed England four years ago. When you start missing the solidity provided by the likes of Dinesh Karthik and Wasim Jaffer at the top of the order, you know you are in serious trouble.

Even on the bowling side, without Zaheer Khan, this Indian bowling line-up can boss a side around for say 40-45 overs, after which even a Graeme Swann can start having designs of dominating a tiring attack groomed on a rigorous diet of four-overs-a-day cricket.

It’s not like Broad is flattening a truly great side, but it’s a performance around which he can build his legend. Before this series started, I used to wonder why a bowler whose numbers were pretty much similar to Ishant Sharma’s, was so talked about in English circles. But England’s obsession with finding the next Botham is well-known and I excused Stuart Broad as the latest English obsession after Andrew Flintoff finished his career leaving many Englishmen and beyond thirsty for more.

For Broad, emulating Flintoff’s numbers career-wise won’t be much of task. All said and done, Flintoff has pretty mediocre numbers. Both Flintoff and Ian Botham are, however, Ashes heroes and unless Broad wins an Ashes series single-handedly, taking wickets of Tendulkar, VVS Laxman, Rahul Dravid, even by the dozens, just won’t count.

There was, until the beginning of this series, another thing that used to irk me – the steadfast refusal of the English to accord any opponent other equivalent billing to the Australians. Kevin Pietersen after the Lord’s Test suggested there exists a genuine hatred for the Australians in English hearts, as a reason why the Pataudi Trophy will never equal the Ashes in intensity in spite of India ranked No 1 in the Test rankings. Hatred and for that matter even history by itself are quite in capable of sustaining interest in a century old cricket contest. When India arrived in England, under-cooked, disinterested and exhausted by the IPL, the reason why The Ashes will be the holiest of all cricketing contests was clear to me. Both sides covet the trophy. Both want it badly and neither side will risk their players in circus acts in return for a few dollars and risk ‘The Ashes’.

Iftikhar Ali Khan, the Nawab of Pataudi (sr), had the distinction of playing for both England and India. In a way, naming the series between India and England after him was apt. After all, making his Test debut for England he had scored a hundred on debut. His career spanning all of six Tests was divided in half – one half for England and the other for India.

The way England have prepared for this series, they have respected his legacy. The way India have approached this series leaves a lot to be desired. The trophy is only as prestigious as the opponents intend it to be. England and Australia have made sure that the Ashes legacy is protected and enhanced. Indian cricket, drunk with the success of circus cricket called the Indian Premier League, have no appetite for, or an appreciation of the Pataudi trophy or the man it intends to honor.

So my message to Stuart Broad… sorry mate, but don’t waste your time on India, preserve your heroics for someone who deserves your passion and skills. Find someone equal to your intensity. India is not that team.