Wicket with first ball and 100 on debut, Part 2: Kim Hughes

Wicket with first ball and 100 on debut, Part 2: Kim Hughes

Perhaps it was a case of Divine justice that allowed one so battered and bruised by “the slings and arrows of outrageous fortune” in his Test career, to emulate so rare and esoteric a First-Class cricket feat. This is the narrative of a particular slice of the life and cricketing times of Kimberley John Hughes, the precociously and prodigiously talented cricketer from Western Australia, and, in many ways, the Peter Pan of Australian cricket. It is widely felt that Hughes was often entrapped, as it were, by his own outstanding talent. READ: Wicket with first ball and 100 on debut, Part 1: Frederick Stocks

Hughes was born January 26, 1954 at Margaret River, Western Australia, the first child of father Stan and mother Ruth. Proficient in a variety of sports in his early days, including field hockey, lawn tennis, Australian Rules Football, and of course, cricket, he gradually showed his preference for, and uncanny ability at cricket, and maintained the same level of enthusiasm for the game throughout his life.

“A pretty cocky little fella” was how one opposing captain had described him during his club cricket days. Perhaps the most perceptive comment of the youthful character of Hughes came from the captain of Subiaco, his football team. Des Hoare, the captain, had this to say: “I have most admired him because hehad the courage and the ability not to become ordinary.”

The trials and tribulations, the ups and downs, and, above all, the severe tests of his inherent character during his 70 Tests for Australia have already been dealt with in these columns.

Let us examine a small segment of his First-Class cricket career here. Hughes scored 12, 711 First-Class runs at an average of 36.52 with a highest of 213. He had 26 centuries and 69 fifties, and held 155 catches. He took only 3 wickets in his entire First-Class career, from 194 deliveries bowled, conceding 97 runs. His best innings bowling analysis was 1 wicket for no runs.

Hughes made his First-Class debut with Western Australia against the formidable New South Wales (NSW) team in a ‘home’ game at Perth in November 1975. Doug Walters, the visiting skipper, batted first and declared his 1st innings on 285 for 8. There were three individual scores in the 60, from Rick McCosker (61), Gary Gilmour (65), and David Colley (64).

Western Australia trumped that with 350 for 8 declared. There were two centuries in the innings: Robert Langer, uncle of the Test player Justin Langer (111) and the lone debutant of the match, Hughes (119). The two of them combined in a 3rd-wicket stand of 205 before Hughes was dismissed. Kim Hughes thus became the 213th player in First-Class cricket history to score a century on debut.

NSW put up 293 in the second innings, with a maiden First-Class century by Peter Toohey (125). Terry Alderman took 4 for 58 for Western Australia, who won the game by 4 wickets. Langer remained not out on 64 and debutant Hughes scored 60, sharing a 4th-wicket stand of 104 with Langer.

The First-Class career of the ‘Golden Boy of Australian Cricket’ had been launched in emphatic fashion.

This is what another batting great of Australian cricket, the incomparable Ricky Ponting, had to say about the batting abilities of Kim Hughes:

“One of [my mother’s] most prominent early memories of me is when I was sitting on the lounge-room floor, eyes fixed on the television, watching Kim Hughes bat. Kim was my first hero in Test cricket, a batsman who, when he was on, was unstoppable. I remember him taking on the West Indies at the MCG the week after my seventh birthday, their fast bowlers aiming at his chest and head, him hooking and pulling fearlessly. That knock stays burned in my memory and probably set the standard for the sort of cricketer I wanted to become.”

Hughes was not called upon to bowl in his first 40 First-Class games. Then came the match against Guyana, played at Georgetown in March 1978. The Australians were being led by Jeff Thomson in this game, and he opted to bat. The visitors scored 361 for 6 declared, batting with gay abandon throughout their 88 overs. Rick Darling (123) and Graham Yallop (118 retired hurt) scored centuries. Hughes scored 43 from #6.

The Australians declared for the second time in the game, this time at 357 for 7, Gary Cosier (114 not out) scoring a century this time. For the home team, Sew Shivnarine claimed 4 for 104.

In the final innings of the drawn match, Guyana scored 151 for 5, with Harper (71) again shining with the bat. The Australians used eight bowlers in all, and Hughes was the seventh man in the sequence. He dismissed the aforesaid Shivnarine (caught David Ogilvie for 8) with his very first delivery, finishing with figures of 1-1-0-1.

Thus, Kim Hughes became the second, and till date, the last man to not only score a century on First-Class debut, but to capture a wicket with his first ball bowled in First-Class cricket.

Hughes married his childhood sweetheart Jenny Davidson in March 1977. They had a pair of twins, Sean and Simon, another son, Bradley, and, four years later, a daughter Claire in 1988. 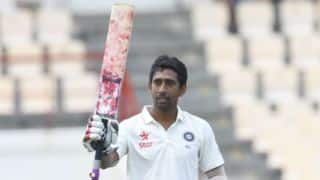 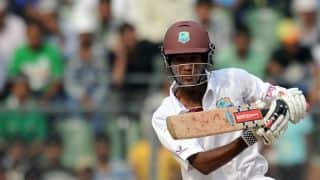