Rhodes has played 1,110 First-Class matches in his career and owns the record by quite a margin as the second placed Frank Woolley has 978 matches.

Born October 29, 1877, Wilfred Rhodes was an England and Yorkshire stalwart, who played Test cricket for more than three decades. A right-handed batsman and a slow left-arm orthodox bowler, Rhodes owns most of the First-Class records under the sun. He has over 30,000 runs at an average of 30 an innings for Yorkshire and has taken 3,597 wickets at 16 runs apiece. For England, he has scored 2,000 runs at the same average of 30 and 127 wickets at 26.96 apiece. He holds unique partnership records while opening the batting as well as playing at number XI. On his birth anniversary, Chinmay Jawalekar brings you 15 startling statistics about the legend.

1. Most matches in First-Class cricket

2. Most wickets in First-Class cricket

Rhodes has a record 4,204 First-Class wickets to his name, yet another record he owns by quite a margin. He has taken over 400 wickets more than the second placed Tich Freeman.

Here Rhodes is second to Freeman, who has 140 five-wicket hauls in-an-innings in his First-Class career, as compared to Rhodes’ 68.

4. Most ten-wickets-in-a-match in First-Class career

Rhodes has again 68 ten-wicket hauls in a match during his career, a feat that puts him on sixth position in the all-time list.

5. Most balls bowled in First-Class career

Rhodes has bowled most number of balls 1,85,742 in his First-Class career.

6. Most runs conceded in First-Class career

Rhodes has conceded most number of runs 70,322 in his First-Class career.

7. Most catches in First-Class career

With 764 career catches, Rhodes is seventh on the list of most catches taken in First-Class cricket.

8. Most runs in First-Class career

Only four people have scored over 30,000 runs and taken more than 2000 wickets in the history of First-Class cricket. Rhodes is one of them. Other players are WG Grace, GH Hirst and Woolley.

Rhodes is the only person to do the 1,000 run-100 wicket double in a County Championship season 16 times during his career.

Rhodes has the distinction of having the longest Test career. His career stretched for 30 years and 315 days, as he made his Test debut in June 1899 and played his last Test in April 1930.

At 52 years and 165 days, Rhodes is the oldest player to feature in a Test match, when he turned out for England against the West Indies at Kingston.

13. The double, this time for England

Rhodes is the first person to do a 1,000 run-100 wicket double in Test cricket for England.

14. The biggest floater of all time

Rhodes is one of only three players in the history of the game to bat at all 11 positions. The other two players who hold this unique distinction are Syd Gregory and Vinoo Mankad.

During the fourth Ashes Test in the 1912 series, Rhodes opened the batting with Jack Hobbs and the duo added 323 runs for the first wicket. It was the first occasion when a pair had added 250 (and 300) for any wicket in Test cricket. Australia’s Roger Hartigan and Clem Hill held the previous record when they had a partnership of 243 runs for the eighth wicket during the third Ashes Test from the 1908 series. 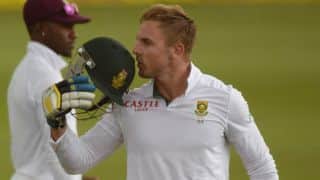