Following two tumultuous seasons, the Pune Warriors India enters the Indian Premier League (IPL) 2013 with the hope of changing their fortunes. Despite having strong players in their squad, Pune stumbled after positive starts to both their previous campaign — something that baffled cricket fans. However, a fresh start beckons under the leadership of a young captain, who is waiting to make a mark. 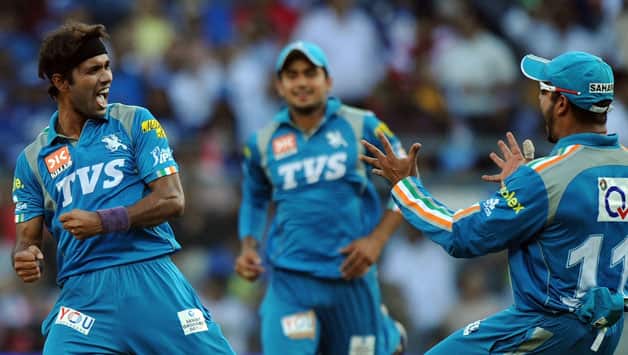 As the season progresses, Pune have to zero in on a settled combination. Too many changes wouldn t help their cause and the team management has to have a more concrete plan © AFP

Following two tumultuous seasons, the Pune Warriors India enters the Indian Premier League (IPL) 2013 with the hope of changing their fortunes. Despite having strong players in their squad, Pune stumbled after positive starts to both their previous campaign — something that baffled cricket fans. However, a fresh start beckons under the leadership of a young captain, who is waiting to make a mark.

A look at Pune’s squad would reveal that they have packed their strength in the foreign recruits. That was a major problem for them last season as they relied heavily on that set. Here is a list of their foreign players in the Pune squad: Angelo Mathews, Aaron Finch, Wayne Parnell, Ajantha Mendis, Steve Smith, Marlon Samuels, Kane Richardson, Mitchell Marsh, Tamim Iqbal, Luke Wright and Ross Taylor. With Mathews at the helm, Pune can only choose three from the remaining players. It is a tough proposition as majority of them have strong cases for a berth in the eleven and Pune would end up benching some serious quality.

Considering Pune’s performance in the last season, Smith and Samuels should make the cut. Smith was one of the few bright spots to emerge from their otherwise forgettable campaign. Samuels has grown in stature over the last year and is in the form of his life. For the lone remaining overseas spot, there would be some strong competition, but Taylor should make it through given his match-winning potential. Mendis and the others can come in with regards to the conditions.

The Indian contingent in Pune’s roster has to rise to the occasion and contribute. Previous editions of the IPL have proved that good performances from the domestic players have made the difference between the teams that have gone all the way and those who failed to make the cut. For that to happen, the Indian internationals have to take the lead. Yuvraj Singh and Robin Uthappa have to be at the forefront as far as the batting is concerned.

Yuvraj missed the last season due to his illness and would be fired up to perform. He doesn’t have to captain the side and that would allow him to bat more freely. His left-armers would also be a handful as he has done well in T20 cricket off-late. On the other hand, Uthappa is a bit of an enigma who can win you games with stunning knocks and then surprise you with some ordinary displays. It is imperative that he performs regularly and maintains a good strike-rate to pump life into Pune’s batting.

Abhishek Nayar comes into the IPL at the back of a fantastic domestic season. During his time at the Mumbai Indians, he scripted numerous impact knocks and was a dependable option. His bowling was also handy whenever the captain required his services. Pune have done well to pick him as it strengthens their Indian resources. He hasn’t had very successful IPL seasons off-late and this may be his chance to make a comeback.

In all likelihood, Pune would field a completely Indian bowling attack. Ashok Dinda would be their spearhead and he can be very effective in the format. However, their trump-card would be the young Bhuvneshwar Kumar, whose stocks have risen in the recent past. He did not play all the games last season, but with his impressive performances at the highest level, Pune would back him to come good.
Pune have Mendis as the spinner, but his appearances may be restricted due to the foreign players’ restriction. Thus, Pune would have to turn to Rahul Sharma, the star of their inaugural season, to do the trick. They also have the rising talent in Parvez Rasool, who has a good track record behind him and would get his first shot at limelight.

As the season progresses, Pune have to zero in on a settled combination. Too many changes wouldn’t help their cause and the team management has to have a more concrete plan. Their biggest star attraction — Sourav Ganguly — wouldn’t be playing this season and that might affect their following a touch. However, results matter and they can turn the crowds to the stadium if they play to their potential. Will IPL 2013 bring about Pune’s renaissance?

The likes of Kamran Khan, Zafir Patel and Javed Khan owe it to the IPL for their overnight success and riches