Things were already bad enough for Rohit Sharma with the voices demanding his ouster from the team gathering steady momentum, thanks to a string of failures with the bat during recent times. On Saturday, Rohit did himself no good when he was out leg before wicket to the very first ball he faced during the third One-Day International (ODI) against Sri Lanka. 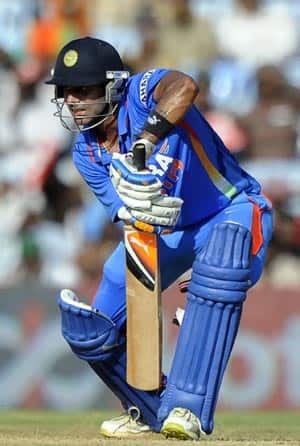 If Manoj Tiwary is picked for the remaining two ODIs, the heavy expectations on him would be a tad bit unfair, considering the fact he had last played an ODI almost eight months ago © AFP

Things were already bad enough for Rohit Sharma with the voices demanding his ouster from the team gathering steady momentum, thanks to a string of failures with the bat during recent times. On Saturday, Rohit did himself no good when he was out leg before wicket to the very first ball he faced during the third One-Day International (ODI) against Sri Lanka. Although it’s unfortunate that Rohit was trapped in front by an almost unplayable full-length delivery from Lasith Malinga, one would expect him to be better prepared considering the fact that it was a do-or-die situation for him.

Rohit has been a consistent performer on the domestic circuit. His contributions in the Indian Premier League (IPL) too have been noteworthy. Why he has failed to perform with the same grace and ease on the international stage is indeed baffling. Make no mistakes, the bowlers in the IPL are no pushovers. Some teams in that tournament feature the best bowlers in the world, and he has faced them with nonchalant ease. The one question that is increasingly asked is: Does Rohit really have a temperament issue? What else could explain just two centuries after 83 ODIs at an average of 31.70 for a player who averages almost 60 in First-class cricket? Also, he is yet to play a Test.

Gautam Gambhir, one of India’s most efficient batsmen during recent times in the limited-overs format has stated that one simply cannot overlook Rohit’s quality. “He might not be among the runs, but Rohit was batting the best among all of us in the nets,” said Gambhir. Yet, Rohit has failed miserably when compared to his fellow teammates when it comes to scoring runs for the side. After a brilliant run during the home series against West Indies last year, Rohit has played 11 matches and scored 156 runs at a paltry average of just 15.60. That is certainly not the kind of numbers you’d associate with someone who was hailed as the next big thing in Indian cricket.

That throws up an interesting question: If Rohit is really the next big thing in Indian cricket, does it augur well to discard him at this juncture? One cannot deny the fact that he’s been given ample number of chances already, but doesn’t it make sense to persist with him in the next two matches as well, especially because there is nothing major at stake in this bilateral ODI series? There is no questioning Rohit’s potential, but he needs to toughen up mentally. He’s fortunate enough to have the backing of some of the senior players in side, but he needs to realise that it won’t last forever. As Mahendra Singh Dhoni hinted, “You always back youngsters, but what is important is that in the process you are not coming in the way of somebody else who is sitting on the bench.”

In this case, Rohit has no doubt been coming in the way of Manoj Tiwary. The latter has been warming the benches for quite some time now. Considering Rohit’s dismal performances in this series, the voices demanding Tiwary’s inclusion are growing louder and louder. However, if Tiwary is picked, the heavy expectations on him right would be a tad bit unfair. He last played an ODI almost eight months ago against the West Indies at Chennai, in which he scored a match-winning century. It was harsh on the young Bengal player to have been dropped after proving a point, and considering the long gap and the beating his morale must have taken. To expect Tiwary to carry forward from where he left off is asking too much, especially in the remainder of this tournament.

A year ago, during India’s horrendous tour of England, a similar campaign was started demanding the exclusion of an underperforming Virat Kohli from the side. It was believed that Rohit was the apt man to replace Kohli and change India’s dwindling fortunes, primarily because Rohit was ‘technically sounder’ than Kohli. But the think-tank stuck with Kohli, and the rest, as they say, is history. Fast-forward to today and Rohit now finds himself in Kohli’s shoes. Either he can choose to fight it out like Kohli, or, he must be ready to relinquish his place to Tiwary.

If the team does decide to persist with Rohit for the remaining two ODIs against Sri Lanka, then he must leave no stone unturned to repay the faith of his teammates. However, if his downward spiral continues, then it’s time the side ropes in Tiwary from the next series and give him equal number of chances to prove himself. Looking at how Dhoni has been operating since the last few years, there is no doubt that he will give such youngsters a fair run. This point was reiterated by the skipper himself when he said, “What I personally believe in is to give a batsman or a bowler a few games before we change him because it gives him an opportunity to prove himself. In the same way, if he is not performing and then the new guy comes in, then you give him a stretch of games so that he is confident that he won’t be shuffled in every match.”

Dhoni and Raina: Comparison between two of India's finest finishers