Ian Reid recalls the roller-coaster ride of Mitchell Johnson who will be turning out for the Mumbai Indians in the fifth edition of the Indian Premier League (IPL). 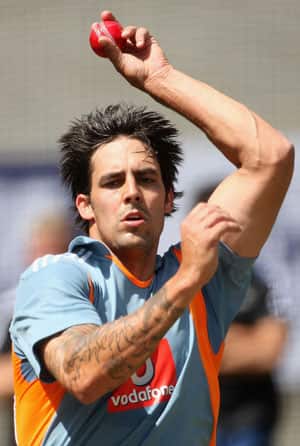 Mitchell Johnson, the forgotten man of Australian cricket, will be hoping to grab all the opportunity he gets with Mumbai Indians to impress the Australian selectors © Getty Images

Ian Reid recalls the roller-coaster ride of Mitchell Johnson who will be turning out for the Mumbai Indians in the fifth edition of the Indian Premier League (IPL).

Remember Mitchell Johnson? He was the bloke who tore apart South Africa’s batsmen in a historical game at the WACA in 2008. He also had another dig at them in 2009 where he starred as an emerging all-rounder. He received the ICC Player of the Year award in 2009. He took six for 38 against England in a victorious game at the WACA – an effort during a forgettable Ashes series – and six for 31 versus Sri Lanka in an ODI played in 2011 (4th best figures in Australian ODI history).

The problem with this picture is that it was distorted by Johnson’s unbelievable inconsistency which ended up having a massive negative impact on the Australian side.

In Johnson’s last 10 Tests, which I see as relevant indication to form beyond the stats, he took 27 wickets, but this came at an average of 48.85. His control was shaky. He struggled to separate an unfortunate incident in his personal life from his professional career. He’d also adjusted his run-up considerably in his last few appearances. And he was just too inconsistent between his best and his worst. This was not helping the consistency required for Australia’s Test bowlers to move forward as they strived to advance back to the No 1 rank.

Johnson’s “hot and cold” bowling no longer suited Australian Test cricket, with the likes of Peter Siddle, Ben Hilfenhaus and Ryan Harris forming a potent attack to rout India 4-0 in the Border-Gavaskar series. Then there’s the burst of young talented bowlers like James Pattinson, Patty Cummins, Ben Cutting, Alister McDermott, Jackson Bird, Nathan Coluter-Nile and Josh Hazlewood. All of them stand out as recognised emerging players of the future.

With the exception of Mitchell Johnson, most of the above-mentioned players come up for discussion when Australia’s bowling future is talked about. He seems to have disappeared off the radar in a very short space of time and I don’t see his immediate return to Test cricket.

With all the cricket we’ve been exposed to since Johnson’s final series against South Africa in November 2011 (series was tied 1-1), it’s understandable why he may have become the “forgotten player” of Australian cricket, especially after the way the bowling unit performed during the Australian summer. It was a daunting, exciting display to watch and this was an attack that featured a balance of experience and youth. One can’t forget the effort prior to the summer by Patrick Cummins during Mitchell’s last Test series. It was a performance which showed us that the young guys have the goods to compete with the seniors. James Pattinson has done this outstandingly.

It’s not all doom and gloom for Johnson. Though I can’t see an immediate return to Test cricket, I do believe he has that X factor for limited-overs cricket. His stats to do the talking for him.

These stats are a true reflection of his performances. He can bowl unplayable yorkers, bang in bloody hard and extract bounce from most tracks. He has raw pace and lures batsmen to take him. When he has a bit of swing on offer, he’s a handful to combat for most batsmen, very often unplayable. In a nutshell, his bowling attributes seem credible for limited-overs cricket and his statistics indicate that upon his return to cricket, he should be given the opportunity to return to the limited-overs set-up where recently the bowlers have had some difficulties.

His natural abilities and his statistics give clear indication that he is best suited to limited-overs cricket and can provide successful input for the side to get the required output. It is a format which allows him to limit the gap between his best and worst, whereas the harsh nature of Test cricket doesn’t allow him this opportunity. Having also watched quite a lot of his bowling performances in his most recent ODIs I have recorded and this all seems valid.

As an emerging all-rounder, he also has the ability to bat with aggression and caution, making him an extremely useful lower order batsman in ODI cricket.

But does Johnson have the self-belief to return?

Darren Berry, the coach of the South Australian Redbacks, wrote an article stating that a player needs to have that “look in his eye” to show he has the self-belief that he is the man for the job. In his capacity as coach he states that he can instantly see this in a player.

When I see Johnson in the green and gold gear, there is a look about him. It’s one of confidence, it’s the look in his eye when he gets a wicket that he is the man for the job and has the drive and hunger for more – something I don’t see when he is in the whites.

Johnson is in the Mumbai Indians team for the Indian Premier League (IPL). Hopefully he gets a few games in there to make people remember who Mitchell Johnson is.

Maybe, just maybe, he will be able to gain the confidence of the new selection panel in the not too distant future to get a re-call to the ODI Squad.