Mumbai Indians (MI) after a winless drought earlier this season have defied all the odds and bounced back hard to qualify for the play-offs.

Mumbai Indians (MI) after a winless drought earlier this season have defied all the odds and bounced back hard to qualify for the play-offs.On Saturday, they beat Sunrisers Hyderabad (SRH) to finish at no.2 in the points table. MI take on Chennai Super Kings (CSK) in the first qualifier of the Indian Premier League (IPL) on Tuesday but will face a selection dilemma between Lendl Simmons and Alex Hales for the opening slot. Suraj Choudhari takes a closer look at both of them.

Lendl Simmons so far has shouldered the responsibility of an opener exceptionally well since he replaced Aaron Finch, who was ruled out of the tournament due to an injury earlier this season. Simmons inclusion strengthened the Mumbai top-order and changed the side’s fortunes for the good. He scored 407 runs in 11 matches at a steady strike rate of 118. Simmons looked composed and have confronted the oppositions with immense confidence. He looked to play through the 20-overs and MI benefitted from this approach. He may not be a Kieron Pollard at the crease but he is well capable of shifting gears and providing impetus with his intrepid stroke play.

Before Simmons inclusion, MI openers failed miserably to provide a desirable start. However with every passing game, it seems the opening combo of Simmons and Parthiv Patel are getting better. The duo posted 106 for the first wicket in a decisive match against SRH, which was also their last league game.

It was a surprise when the hard-hitting English batsman Alex Hales remained unsold in the IPL 2015 players’ auctions. The MI management however roped-in the 26-year old as a replacement for the injured Corey Anderson. One should remember Hales had a very successful outing in the ongoing Natwest T20 Blast. He comes fresh from a blitzkrieg against Warwickshire – an innings of unbeaten 86 from 43 balls. He struck six sixes off six consecutive deliveries. In this format, he averages 30.14 at a strike rate of 140.6 and the numbers are fair indicators of his prowess in this format.

Hales has represented England in 33 T20 internationals and averages almost 38 with a strike rate of 138.46. He has a career defining century to his name, which came against Sri Lanka in a group match of the ICC World T20 in 2014. Hales singlehandedly carried his team over the line with his magnificent knock of 116 not out off 64 deliveries, which contained 11 boundaries and six sixes. Though that was more than a year back, Hales carries a reputation of a match-winner. Like a Brendon McCullum or a Chris Gayle, a Hales knock can independently decide a game’s fate.

Simmons is Mumbai’s second highest run-getter this season and has been instrumental in the side’s success but unfortunately a side can only field four overseas players which means either him or Hales will get a game tonight. MI preferably won’t disturb the winning combination and will stick to their identical playing XI. But MI will be tempted to unleash the English maverick against the strong Chennai Super Kings. The sane heads in Mumbai support staff have a pleasant selection dilemma ahead and will have to make a tough call.

We will only know tonight if Hales gets to make his IPL debut or if they persist with the tried and tested Simmons. 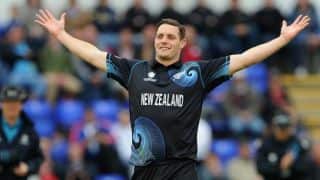