Rajasthan Royals’ fairytale triumph in the Indian Premier League (IPL) 2008 tugged the hearts of cricket fans around the world. It was Shane Warne’s inspirational leadership that transformed a side that was considered one of the weakest on paper into champions. 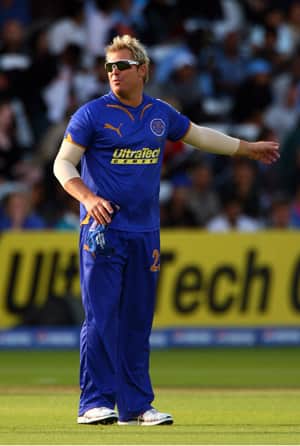 The father figure of Shane Warne (above) will be missed by Rajasthan Royals for his tremendous man-management skills and mentoring of youngsters. His successor Rahul Dravid has a task on his hands © Getty Images

Rajasthan Royals’ fairytale triumph in the Indian Premier League (IPL) 2008 tugged the hearts of cricket fans around the world. It was Shane Warne’s inspirational leadership that transformed a side that was considered one of the weakest on paper into champions. One can say that the IPL owes a lot to Rajasthan for the success of season one as it was their charge that caught the attention of the masses. Rajasthan’s nomination for the Laureus Sports Awards is proof of the interest they garnered for the tournament.

Four years down the line, Rajasthan’s fairytale seems a distant memory. In the seasons that followed, they have failed to make it past the league stage and have struggled to maintain the high standards they set in 2008. There have been the odd flashes of brilliance where they showed tendencies of regaining the magic of old, but those sparks fizzled out with the passage of time. Consistency has been missing – something they unfailingly displayed during the first season.

It would be Rajasthan’s first outing without the services and guidance of Warne. Even though Rajasthan haven’t been a successful unit in the aftermath of the famous victory, Warne continued to remain a father figure – respected by one and all in the franchise. He showed tremendous man-management skills and mentored quite a few youngsters. It isn’t just his bowling, but his mere presence in the dressing room would be missed tremendously. This is where the new captain, Rahul Dravid has to step in and take charge.

Dravid’s recent retirement may help take the pressure off him and allow him to enjoy his game. It would be a challenge to fill into Warne’s shoes, but he has been in a similar position in the past. During his initial days as India captain, Dravid had a young side at his disposal and was successful in producing positive results. However, his leadership credentials came under severe criticism during the first season when he led Royal Challengers Bangalore. The faith shown by the Rajasthan management has given him a chance at redemption.

The Rajasthan squad under Dravid is a relatively stronger unit when compare to the one Warne captained last season. The core of the side hasn’t changed much and the new recruits have added more firepower to the line-up. Shane Watson, Dravid and Johan Botha would be the senior men who would take most of the responsibility and guide the team. Watson wouldn’t be available until the end of April and Botha may have a bigger role till then.

The most interesting buys by Rajasthan are that of Brad Hogg and Brad Hodge. It is clear that the team management have kept the age factor aside and have completely based their selections on performance. A remarkable comeback by Hogg has seen him travel around the globe as a T20 cricketer and Rajasthan have done well to include him keeping Warne’s departure in perspective. Hodge may not be the youngest batsman, but continues to be a force in the shortest format.

Owais Shah, Dinesh Chandimal, Kevon Cooper and Shantakumaran Sreesanth are some of the other new additions to the squad. With their inclusions, Rajasthan have stronger options for each spot when compared to the ones they had last year. The inclusion of Chandimal gives them a valuable wicket-keeping option and that may allow them to play the extra bowler or the batsman. In the past they have been forced to play stumpers who haven’t been very effective with the bat.

A lot would be expected of Ajinkya Rahane as he has grown into a better cricketer over the last year. There were notions that he isn’t a very effective T20 player – a belief that was brushed aside during his blistering T20 international debut. Dravid and Rahane would be the certainties in the top order with Botha being a floater. Paul Collingwood’s availability is fantastic news for them as he is a utility player in the format. However, there would be huge competition for spots in the playing eleven with Shah, Hodge and Chandimal staking their claims as batsmen.

Ashok Menaria would play as an all-rounder and would be expected to contribute in both departments. His talent attracted rich praise from Warne and a good season in the IPL may put him on the selectors’ radar for the upcoming ICC World T20. Hogg’s wealth of experience would be useful to him and the youngster must pick up quite a few tips from the Australian.

Coming to the fast bowling, Rajasthan would find themselves in a tricky situation as far as selection is considered. Cooper is a medium-pacer and would only make it into the eleven based on the combination Rajasthan opt for. In fact they may be forced to play both Shaun Tait and Sreesanth – two bowlers who can be a captain’s nightmare on their bad days. Although both the pacers can be dangerous, their erratic tendencies are well documented and playing them together is a huge gamble. Apart from them they have a number of Indian domestic fast bowlers with Siddharth Trivedi leading the pack.

The first challenge for Rajasthan would be to strike consistency and maintain a winning momentum. Isolated wins wouldn’t help their cause and they need to prolong such runs to make it through to the play-offs. Warne has left a legacy for them to live up to. This is probably their best chance since 2008.