William Ward: The banker who bought Lord’s and scored the first First-Class double-hundred

William Ward: The banker who bought Lord’s and scored the first First-Class double-hundred

WIlliam Ward made his First-Class debut for a team entitled England against Surrey at Lord’s in July 1810.

The narrative begins with one John Small of Petersfield, the cricketing son of a common saddler. As a small-scale manufacturer of cricket balls in the 18th century, he, along with several other similar small concerns, had dared to compete with Duke & Son, the famous cricket equipment manufacturer, whose business had been set up at Penhurst, Kent in 1760. Whatever be the merits of the skill of John Small as an artisan, it is an undeniable fact that he is believed to be the manufacturer of the oldest existing cricket ball, the relic of a record-setting innings that was played at Lord’s in July 1820, and one of the treasures of the famous Lord’s MCC Museum.

As far as the actual process of manufacture is concerned, not much has changed over the years. At the core is the ‘quilt’, a hard-baked kernel of cork and worsted. Around this are several layers of thin cork and thread, patiently hammered and pressed together by the ball-maker until the requisite size and weight are achieved. Two outer ‘cups’ of tanned hide then enclose each half of the quilt. The whole thing is then squeezed together in a vice, before the cups are hand-sewn by the ‘closer’, or the man who creates the all-important triple-seam, the hallmark of the cricket ball, and the vital ingredient of the cut, swing, seam, and other variations that a bowler would aspire to impart to the trajectory of the ball in flight. The leather is then painted in the characteristic dark red colour cricket-lovers all over the world are familiar with. The manufacturer’s name is stamped on the surface, and it then goes through a final check for weight and girth.

Well, the red dye of the oldest existing cricket ball has faded away with usage and time, but the attached card states that it has a diameter of 7.16 cm and a weight of 158 gm.

It is now time to introduce the protagonist of this tale.William Ward was born July 24, 1787, the second son of George Ward, a merchant of Broad Street and Northwood Park, Cowes, Isle of Wight, and Mary, daughter of Henry Sampson Woodfall. There was some Spanish blood in the family from William’s grandmother. His father became a prosperous merchant specialising in Spanish and Mediterranean produce. William was born at their London residence at Highbury Place, Islington.

William Ward was educated at Winchester College from 1800 to 1804. After leaving Winchester, William spent some time at Antwerp acquiring expertise in foreign monetary exchanges. In April 1817, less than 30 years of age, William became a Director of the Bank of England, and a highly respected man in financial and administrative circles. He held the post till 1836. He was Commissioner of Lunacy from 1828 to 1831, and a Master, Musician’s Company, from 1830 to 1831. In June 1826 he became a Member of Parliament for the City of London. In short, William was a man of many enviable parts.

A tall and powerfully built man, Ward had another interesting feather in his cap, being one of the most pre-eminently talented English cricketers of the pre-Victorian era.

Ward made his First-Class debut for a team entitled England against Surrey at Lord’s in July 1810. In a game that is not very well documented, he is seen to have scored a duck in his very first First-Class innings and to be absent hurt in the second knock. Surrey won the game by 8 wickets. In his 20th match, playing for Hampshire against MCC, again at Lord’s, in August 1817, Ward scored his first fifty (68) in a total of 181. Hampshire won by 75 runs.

It was in his 31st match that he scored his maiden century. Playing for an MCC team against Norfolk, the game began at Lord’s on July 24, 1820, Ward’s 33rd birthday. MCC scored 473, a huge total in those days. Ward, batting at No. 4, began his assault on the under-arm bowling of Norfolk on the first day (there was no round-arm or over-arm bowling in this period).

One interesting aspect of this innings is the fact that all 278 runs had to be run for; there were no boundaries in those days. This innings of 278 by William Ward is of historical importance as it was the very first recorded individual double century in First-Class cricket.

This 278 was to remain the highest individual score in First-Class cricket for 56 years till it was bettered by WG Grace with an innings of 344 against Kent at Canterbury in 1876.

Ward’s total also remained the highest individual score at Lord’s for 105 years until Percy Holmes bettered it with 315 not out for Yorkshire against Middlesex in 1925.

This was Ward’s maiden First-Class century, and was to be (obviously) the highest individual score of his career. The historic ball that had withstood the fury of Ward’s bat is referred to at the beginning of this narrative, and is still to be seen in the Lord’s MCC Museum.

The hapless Norfolk team were dismissed for 92. MCC batted again, scoring 108, Ward contributing 10 of those runs. There were three men absent hurt in the Norfolk second innings of 72, and MCC won the match by a huge margin of 417 runs.

The archives list 17 instances of a batsman scoring in excess of 250 in a First-Class innings at Lord’s till date, the highest being 333 by skipper Graham Gooch in the first innings versus India in July 1990 (Gooch followed up this effort with 123 in the second innings, as is well-known).

Ward’s next century came in his 50th match, for Hampshire against ‘England’ at Bramshill in August 1823 when he contributed 120 to the Hampshire first-innings total of 319. Hampshire won by 5 wickets.

His 60th match saw him scoring his third and last First-Class century, in the traditional Gentlemen versus Players game at Lord’s in 1825. The Gentlemen fielded 16 players to 11 of the Players, but even so, could score only 144. The 11 Players took a first-innings lead of 99. James Saunders was run out for 99, while Tom Beagley remained not out on 54.

The Gentlemen versus Players game at Lord’s in 1827 proved to be another ridiculous affair, with the Gentlemen reposing their faith in numbers rather than ability, and fielding 17 men with the Players being restricted to the normal 11. The Gentlemen batted first and were all out for 167, William Ward scoring 96 not out. William Ashby picked up 7 wickets.

The Players replied with 334, Saunders scoring an even 100. The Gentlemen were dismissed for 125, Ward top-scoring with 22. Ashby took 4 wickets this time, as the Players won the game by an innings and 42 runs.

This would, perhaps, be an appropriate juncture in the narrative to speak about the Gentlemen versus Players games of the time. Many of them were contrived affairs bordering on the downright ludicrous. Speaking on this issue in his book Cricket: The Game of Life: Every reason to celebrate, Scyld Berry has this to say: “Even the fixture which should have been the highlight of every season seemed moribund, because the Gentlemen, after the realignment of the aristocracy, could no longer give the Players a game. Absurd attempts were made to engineer a balance: nine Players were matched against eleven Gentlemen, or eleven Players against sixteen or eighteen Gentlemen. Even more ingeniously, the size of the wicket was reduced when the Gentlemen batted: in 1832, they were given stumps five inches lower and two inches narrower. In 1837, William Ward, the city financier and MP who had bought the third Lord’s ground and scored 278 on it for MCC v Norfolk, had a brainwave: when the Players batted, they would have to defend a wicket made of four stumps, three feet high and one foot wide. Yet they still won by an innings. The match came to be known as ‘the Barn Door Match’, or ‘Ward’s Folly’.”

The game in question was played at Lord’s in July 1837. The Gentlemen, led by the aforesaid Ward (who contributed 2 in each innings), managed to score 54. William Lillywhite, the ‘Nonpareil’, captured 9 wickets. The Players replied with 99 despite the handicaps mentioned above.

The Gentlemen then scored a pathetic 35 in the second innings to lose the game by an innings and 10 runs. In the Players innings, Fuller Pilch was dismissed when his hat knocked down the wicket, as per Scores and Biographies.

Given these well-documented shenanigans in these contests, the keen student of the game may well be left wondering as to what it was that prompted the authorities to attribute First-Class status to these farcical games.

William Ward played his last First-Class game, his 130th, for Hampshire against Petworth at Southampton in August 1845, at the age of 58. He scored 4 not out and 0 (thus rounding off his First-Class career with a duck at each end) in a Hampshire victory by 27 runs.

The History of MCC, from a newsletter published from Lord’s: The Home of Cricket, reveals the information that it was in the year 1825 that Ward wrote his name forever in the annals of cricket by becoming the man who saved the hallowed turf of Lord’s from being converted into a building site.

Lovers of cricket, specifically, the traditionalists, have every reason to rejoice and to be grateful to the Banker for this. History states that it was in 1825 that Thomas Lord was on the verge of turning over the famous cricket ground (his third, at St John’s Wood) to a consortium of builders for the purpose of property development. When Ward heard of this he bought out the lease for £5000. Having provided MCC with a ground for 38 years, Lord was happy to retire. He passed away seven years later.

The History of Parliament: the House of Commons 1820-1832, edited by DR Fisher in 2009, relates a sad tale of a reversal of fortunes of Ward, who was on the point of bankruptcy and personal ruin by 1835. He was forced to close down his business and to declare bankruptcy on February 6, 1836. Under these unfortunate circumstances, his four daughters thought it prudent to sell the lease on Lord’s to one JH Dark for £2000 and an annuity of £425 for the 58 years remaining of the lease. Ward had no other option but to resign from his post as a Bank Director in 1836 and to shift from his town house in London.

William Ward passed away on June 30, 1849 aged almost 62, at his then London residence at 4 Wyndham Place, Bryanston Square. Whatever vicissitudes he may have faced in his lifetime and however disillusioned he may have become in his later life there is no gainsaying the fact that there resides in the Lord’s MCC Museum, in its ancient splendour, a very tangible token of the glorious 278 he had scored at Lord’s in that magical July of 1820, the very first double-century in First-Class cricket. 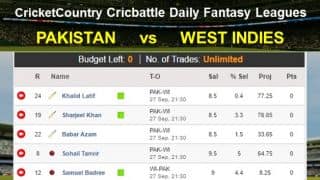 What if Brendon McCullum was present to turn tides for New Zealand in 1st Test against India?