There was a pleasant ripple in the life of the ex-patriate English circle in erstwhile Bombay when the family of Sir William Yardley, Chief Justice of Bombay, was blessed with a son on June 10, 1849.

There was a pleasant ripple in the life of the ex-patriate English circle in erstwhile Bombay when the family of Sir William Yardley, Chief Justice of Bombay, was blessed with a son on June 10, 1849. Perhaps following a family tradition or according to the prevalent custom of the times, the eldest male child of the family was named William like his father.

Clearly a privileged child to the Manor-born, William Yardley Jr was educated at Rugby School where he was imbued with the dictum of the late Dr Thomas Arnold, perhaps the most famous of the eminent Headmasters of Rugby: First religious and moral principle, second gentlemanly conduct, third academic ability. Short, incomplete scorecards are available for 6 cricket matches in 1867 and 1868 where the name of William Yardley appears playing for Rugby, usually performing wicketkeeping duties in addition to batting.

The Register at Cambridge reveals that William Yardley, eldest son of Sir William of Hadlow Park, Tonbridge, having completed his Matric Examination from Rugby School in 1868, was admitted at Trinity on January 24, 1868. He took his BA degree in 1875. Following his father in the legal profession, Yardley Jr was admitted at the Middle Temple, London, on June 24, 1868 for Legal training, and was called to the Bar on January 27, 1973. During his time at Trinity, Yardley was very actively involved in University cricket, earning a Cricket Blue from 1869 to 1872 and being named Cambridge cricket captain in 1871.

He made his First-Class debut in 1868, with Kent against Gentlemen of MCC. Although Gentlemen of MCC won the game by 132 runs (thanks to the superlative bowling efforts of captain EM Grace), Yardley, in the role of wicketkeeper, had a fairly decent initiation into First-Class cricket, scoring 51 and 24 and making a stumping. His Cambridge debut followed next year, against MCC, where he played purely as a batsman and scored 65 and 2*.

One of the highlights of the cricket career of William Yardley was the University Derby of 1870 when Oxford and Cambridge confronted each other at Lord s the match celebrated as Cobden s Match. The legend goes as follows:

Cobden whose name in Cambridge Hall

The feat unto this day recalls,

To win the match by two.

Cambridge had batted first, being bowled out for 147. Avison Scott had top-scored with 45 and keeper Yardley scored 2, while Charles Francis (5 for 59) and Thomas Belcher (4 for 52) were the star bowlers. Oxford did marginally better, being dismissed for 175, Frank Cobden taking 4 for 41 (all bowled).

The Cambridge second-innings total was 206, Yardley s contribution being an even 100 (his maiden First-Class century, off 110 balls, with 14 fours) with some brilliant at times, grand hitting the first century ever scored in Oxford-Cambridge ties.

Oxford began the last innings of the game requiring 179, and there seemed few alarms when the seventh wicket fell at the total of 175. After all, they were within a boundary hit of a victory with 3 wickets in hand. Mention must be made here of the Cambridge left-arm round-arm fast bowler Edward Ward, who had captured 6 for 29 out of the first 7 wickets to fall.

What followed was, of course, the stuff of legends, when Cobden, in an inspired burst of right-arm fast bowling, took a hat-trick, removing Samuel Butler (0), wicketkeeper William Stewart (0), and last man Belcher (0), all 3 wickets falling on the total of 176. Cambridge had won that epochal match by 2 runs, and one more item had been added to the folklore of cricket.

In an article entitled Cricketers I Have Met, the great WG Grace has this to say about Yardley: His height was 5 ft. 11 , ins.; weight, 12, st. He was, without doubt, one of the most brilliant amateurs of his or any time, batting in excellent style, and scoring freely and quickly against all kinds of bowling. Later in the same article, WG reveals another interesting facet of Yardley s cricketing capabilities: He was not a good bowler; but he could bowl fast round-arm with his right and lobs with his left.

This ambidexterity would stand him in good stead in a match mentioned later. During his time at Cambridge, apart from cricket, Yardley is also known to have excelled at tennis and racquets, winning the Racquets Championship against Oxford in 1871.

Let us now return to an interesting incident in a match for Kent, against Surrey at The Oval in 1870. Kent batted first, despite the knowledge that one of their members, Yardley, had not yet been able to report at the ground, having sustained a recent injury. Kent were dismissed for an ignominious 20. Yardley is shown as being absent hurt (otherwise reported as had not arrived 0 ). Surrey scored 160 with George Griffith contributing 59.

It seems that Yardley had been able to present himself at the venue later in the day, and to bat for Kent in their second innings. The following is a description of the events which took place at the beginning of the Kent second innings: Kent were shot out for 20 at the Oval in 1870, with their latecomer William Yardley had not arrived 0 trying to make amends in the 2nd innings by way of a cunning plan. Opening the batting, as fast bowler Walter Anstead came in to bowl, the ambidextrous Yardley (able to throw 75 yards left-handed) reversed his normal right-handed stance and leathered the ball, only narrowly missing the nearby fielder Southerton at point, who now was an aunt sally at effectively silly mid-on. In fairness, Yardley had enigmatically warned Southerton (that should he see him suddenly change stance) to make himself scarce, but Southerton had merely laughed. The next ball Yardley successfully repeated the trick with Southerton this time dropping spread-eagled to the ground. This greatly amused Yardley though the Surrey supporters were incensed; shouting, Not cricket! Not cricket! . Yardley, a thespian and later notable playwright, had turned the proceedings into a farce and when Anstead was withdrawn from the attack the crowd hissed and hooted him like a pantomime villain. Anstead later returned to clean bowl Yardley for 14 and with his innovation ultimately proving to no avail Kent lost by an innings one imagines the incident was dismissed as a bit of nonsense.

Well, two switch-hits in 1870; one wonders what Kevin Pietersen would have made of all this, had he known about his innovation being performed in First-Class cricket so long ago.

Yardley s career with Kent consisted of 34 First-Class matches and a total of 1,473 runs at 24.55 with a solitary hundred and 6 fifties. He held 20 catches and made 1 stumping. He also played 9 matches for the Gentlemen, many of them alongside the WG. Wisden says that It is no flattery to say that in 1870, 1871, and 1872, his only superior as a batsman was Mr. W. G. Grace. This is very high praise indeed, coming from such a quarter. It is said that in the games in which both Yardley and WG played together, Yardley was fond of placing small wagers on their respective scores. In the Gentlemen versus Players match of 1871 at Lord s, Yardley had the unusual satisfaction of outscoring Grace in both innings, with identical scores of 51. WG scored 50 and 37 in this match.

Being an amateur cricketer in his time and age, Yardley had initially adopted his legal practice as his means of living, practising in the South-Eastern Circuit.The multi-faceted Yardley had then gradually added another string to his bow by becoming a stage actor of some repute with the Canterbury Old Stagers. Later, he built up a good reputation in the press as a Drama critic. In his later years, he had also authored, sometimes in collaboration with Herbert Gardner, plays like Little Jack Shepherd, The Passport, Hobbies, and similar productions for the stage.

Yardley was reputed to be the ghost writer of one of WG s four autobiographies The History of a Hundred Centuries, published by Gill in 1895.

William Yardley passed away on October 28, 1900 at Kingston-upon Thames, Surrey, and was laid to rest at Brookwood Cemetery in Woking.

There is, however, a postscript to the life of this remarkably versatile man. In the domestic season of 1901, CB Fry had hit 5 centuries in successive innings and was being hailed as a batting genius through the length and breadth of the land. Having completed his fifth consecutive century (140 against Kent at Hove at the end of August), Fry decided to organise a fundraising game for the widow and children of the deceased Yardley. Fry raised a team (The Rest) of some of the best cricketers of the time, including WG and himself, to take on the Champion County Yorkshire at Lord s in a game in September.

The Rest scored 526, Gilbert Jessop hitting 233 in 150 minutes with 33 fours and 2 fives and sharing a fourth-wicket stand of 204 with Fry (105, his sixth century in consecutive innings, scored in about 3 hours). Fry s feat has been emulated by only Don Bradman and Mike Procter in later years. Yorkshire were then bowled out for 229 and 182, Albert Trott taking 5 for 86 and 8 for 84. The fundraiser had realised about 350 for the widow and children of the late Kent and Cambridge stalwart William Yardley. 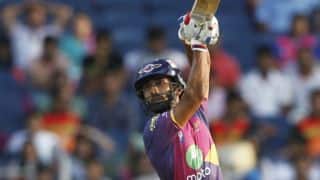 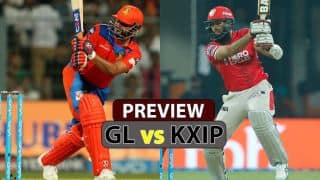