As VVS Laxman walked back after his dismissal in the second innings at Perth, the sun was symbolically setting on the horizion. The resigned look on his face not only reflected the feelings of yet another disappointing innings but also the pain of having to bid adieu to his international career. 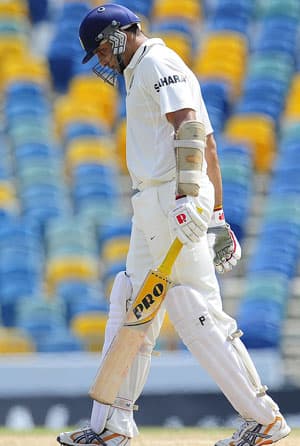 If you get Dravid, great. If you get Sachin, brilliant. If you get Laxman, it’s a miracle – Steve Waugh to his team as captain of Australia

As VVS Laxman walked back after his dismissal in the second innings at Perth, the sun was symbolically setting on the horizion. The resigned look on his face not only reflected the feelings of yet another disappointing innings but also the pain of having to bid adieu to his international career. It was a profoundly poignant moment for Indian cricket fans in general and Laxman’s fans in particular. Laxman was dismissed for naught. At the other end was Rahul Dravid, a man with whom Laxman had strung together numerous acts of defiance in several similar situations in their Test careers. As Laxman made the long walk back, one could not escape the feeling that it marked the end of artistic era.

The above quote by Steve Waugh is a reflection of the respect Laxman has earned from the tough-as-nails Australians.

Indian fans would vouch that Laxman is the one who defied the odds and had gave them hope over the years. In a way he has spoilt them with all those mammoth and miraculous recoveries in memorable Tests. Even as he struggled to come to terms with the recent challenges before him, Indian fans hoped for another resurrection.

Knocks like the 281 at Kolkata or even the 73 not out at Mohali in 2010 injected a never-say-die attitude in the Indian fans. He made them believe that a comeback was possible even from most hopeless situations. For a generation that switched off their television sets when Sachin Tendulkar got out, Laxman changed those preconceived notions and made them stay and watch him take on the mightiest bowlers – presenting a brave fight to turn the tables.

In the two years leading up to the England series, Laxman had been absolutely prolific with a torrential flow of runs from his bat. In that period he scripted numerous match-winning and match-saving efforts. The 96 at Durban versus South Africa and 103 not out against Sri Lanka at Colombo were examples of him playing the anchor role in taking India home or setting up victories overseas.

If the England tour was a wake-up call on Laxman’s waning prowess, the alarm bells are loud and clear in the ongoing campaign at his favourite destination in world cricket. Over the years, he has acquired a reputation as Australia’s nemesis. At the end of the England thrashing, one would have felt it was a small dip in form and backed him for another crack at the Aussies. The West Indies series at home bought him time and confidence in his ability.

England was just a precursor to the ongoing Australia tour and it looks like Laxman’s fairytale has come to an uncharacteristic and cruel end. His slowing reflexes have resulted in a number of dismissals in the arc behind the wicket. The tentative prods outside the off stump, the recurrent errors that bring about his demise. A Laxman in his pomp would have blazed it through the off side with silken touch and perfect timing.

With one Test to go, calls are growing louder to bring in Rohit Sharma for Laxman with an eye on the future. Will the Indian management have the heart to axe Laxman? In England, even as Suresh Raina was struggling, he was retained for the fourth Test where he failed even more miserably. Will Laxman be subjected to the same fate?

It hurts to see legends like Laxman who have given the nation so much joy find themselves in such a position. Indian cricket has seen player in the past hang on past their expiry dates. Laxman’s predicament is an eye-opener for Rahul Dravid and Sachin Tendulkar who most definitively would like to leave the international arena – a stage they graced with such distinction – on their own before they get polite nudges from the men who matter.

For now, it seems we will have to accept the fact that we have to bid farewell with moist eyes to the supreme artist – VVS Laxman, the Vincent van Gogh of cricket!