To attain the No. 1 tag is one thing but to hold on to it for long, with intense competition in rankings, will be a test of character for India.

Virat Kohli and co. have done it again. After an efficient series win over a hapless West Indian side in July and August 2016, India maintained momentum to rattle New Zealand and seal the three-Test series with one game left. This makes the third Test, the first Test being hosted by Indore, a dead rubber. But is it? With this triumph, India have not only won the match and series but have also gained an immense big responsibility. As tension increases between India and Pakistan (already being experienced off the field after the infamous Uri Attacks), things have taken a new turn with the latest ICC Test rankings with India reclaiming the No. 1 position from Pakistan with this clinical victory. FULL CRICKET SCORECARD: India vs New Zealand, 2nd Test at Eden Gardens, Kolkata

For the uninitiated, the rat race in rankings between these two teams started with India winning the third of the four-Test series versus West Indies. India were not even able to celebrate their promotion up the rankings as Pakistan bounced back to level their Test series against England at 2-2 around the same time. The inspiring performance helped the 1992 World Cup champions to ouster India from the No. 1 spot. India still had a Test against West Indies to prevent Pakistan s celebrations but rain had other things in mind. The last Test ended in a tame draw and India dropped below Pakistan with a point separating the two sides.

India must have eyed the rankings coming into their long home season and have secured the top position after just two Tests. But does this mean their task is complete? Zaheer Khan, architect of India’s previous rise to the top spot, mentioned in no uncertain words: Being No. 1 is not a destination . India should know what he means. Being No. 1 is the aim for every team in any format (no matter how much a skipper denies in every press conference). Kohli s young and promising guns have achieved this feat with the back of some hard-fought wins in the past year but their hard work commences now. If India can maintain their top spot for a long period, only then will they feel their job is complete.

Ever since MS Dhoni hung his boots in the longer format, the onus has been on Kohli. His appointment to skipper was not baffling, and he has lived up to the challenge, inspiring a relatively new bunch of players. India s resurgence started with a series loss against Australia. Yes, you read it right. Sometimes a defeat serves well than a sudden victory. India were never expected to win a series Down Under but they competed well. On both occasions when Kohli led in the series (once due to Dhoni s injury and the other time when he retired midway), India played with a purpose and gave it back to their opponents.

Though they lost the first Test at Adelaide by 48 runs, the Kohli era showed that India will play aggressively. Kohli made it clear that he does not play for draws and will push for positive results. India drew the one-off Test series against Bangladesh largely due to rain, but played an intense series against Sri Lanka in 2015. Coming from behind, India won the three-Test series 2-1. This was India s first series win in the country after 22 years. India s next opponent were South Africa in home conditions.

India continued to inflict pain as they gave South Africa minimal breathing space. They pounced on No. 1 side on 3 out of 4 Tests, the other being washed by rain. The series was decided with one game left but India s hunger for success did not die down. This was their biggest victory. Time and again Kohli has stated stated that he wants his side to be ruthless towards the rivals in every encounter. What he clearly means is that he does not want his team s fighting spirit to fade away even after the series is decided. This is an essential quality required in a team sweating it out for the coveted spot in rankings.

India s next assignment was West Indies who were expected to be swept away easily. India did not lose grip in any of the Tests and played with equal zeal. Now that they have pocketed another series beating New Zealand, they have an uphill task to maintain the winning streak against the big guns touring them in the upcoming season. England are a quality side in whites (now turning the heat in limited-overs as well) while beating Australia always gives a new high to any team (as Sri Lanka will vouch for). England and Australia are at 108 points each, not even 5 behind India.

The job is half done till now. India have reclaimed the No. 1 spot quite early under their new deputy (just like Dhoni had in 2009) but teams take notice of the top side to replace them soon. The limelight will be on India along with them being under constant scanner of other teams scheme of things. If other sides will be playing for India s slide, India will be playing for maximum supremacy. To quote Spiderman, With great power comes great responsibility .

India have encountered seam, bounce and spin at home, but their real challenge will be to perform overseas. While India s next tour is nowhere close at the moment, the remaining long home season provides a solid platform to see how India goes about their business and lives upto expectations with added responsibility of the elite and exclusive No. 1 tag.

To attain the No. 1 tag is one thing but to hold on to it for long, with intense competition in rankings, will be a test of character. Sit back and enjoy the next 11 Tests to see India’s true potential. 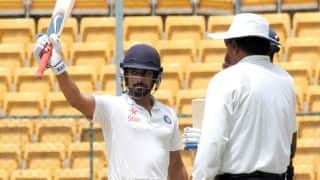