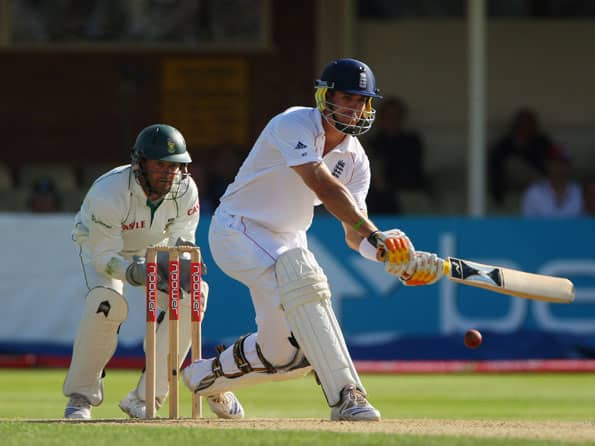 Kevin Pietersen has been promoted up the order and he will be the latest in a long line of Andrew Strauss’s opening partners in ODIs. He just might succeed, but England will hope to have the answer by the time they hit the quarter-finals. In my opinion, this is exactly what this egomaniac of a cricketer needs – to pump himself up for the big stage. After Pietersen burst onto the international cricket scene like a comet during 2005, he has not really lived up to his potential.

It’s been almost three years since Pietersen played a meaningful ODI innings. Worst of all, he has been upstaged by Eoin Morgan, who has been England’s standout player recently.

Pietersen may have innovated the much-debated ‘Switch-Hit’, but Morgan has come up with a whole repertoire of subtle strokes to keep the scoreboard ticking. That even Morgan failed during the 6-1 drubbing in the recently concluded series against Australia, is besides the point.

Pietersen brushed off this huge series loss and, when asked about England’s lack of momentum going into the World Cup, he proclaimed in The Guardian: “It’s going to be totally different. In Australia we know we’re going to get good food, good hotel, good facilities, good ground and good wicket.”

Despite all this, England almost got white-washed! He goes on further to enlighten us with the following observation: “In the World Cup, it will be about dealing with the subcontinent. We’re going to be swapping from Dhaka to Chittagong to Nagpur to Chennai to Bangalore. We don’t know what you’re going to get. So it’s about adjusting to situations.” What he implied, no decent food, hotel or other facilities in the subcontinent!

Contrast this with what Ian Bell had to say in the same paper about playing in the subcontinent: “Yeah, some of the guys will go down ill, we know that. But a lot of the guys really enjoy it here. You know what to expect, and there’s nothing like it anywhere else.” Much more diplomatic, befitting an international cricketer, I would say.

After the fright given to them by Canada, Pietersen, said this in The Guardian: “I don’t think we were relaxed. We were just trying to get used to conditions. We’ve come from three months in Australia in totally different conditions, different wickets and different outfields. We only got off an aeroplane, after how many miles of travelling, two days ago.” Whinging does not become a cricketer of his calibre.

Still, as a keen cricket fan I’ll keep my fingers crossed that Pietersen will fire at the top of the order and give us some glimpses of his greatness!

(Ramesh Shotham, was born in Chennai but was schooled in Bangalore at Clarence High School. Right from the 9th standard, he played in the school’s first XI as one of the youngest players ever. It was during one of the inter-school tourmaments that he first bumped into a young wicketkeeper batsmen called Syed Kirmani. He continued his studies in Madras at the Loyala College where, his enthusiasm for cricket faded and music became his main focus. After graduating Ramesh left Madras to go to Bombay and form one of India’s earliest and famous rock bands ‘The Human Bondage’. Around 1982 Ramesh moved to Europe and based himself in Germany. He has established himself as one of Europe’s most successful and sought-after percussionists. During all these years he has remained a passionate cricket fan)