It was also the first 10-wicket victory in the history of ODIs.

June 11, 1975. Bishan Singh Bedi put the tightest of nooses around the East African batsmen with figures of 12-8-6-1 to help India to their first World Cup match win. Abhishek Mukherjee looks at the first ten-wicket victory in the history of One-Day Internationals (ODIs).

When World Cup 1975 had taken off, most international cricketers were not aware of the nuances of the shorter format. While Sunday League had been in vogue in England for a decade, the others were still coming to terms to the concepts of aggressive batting and tight bowling, especially in “slog overs”.

ICC decided to include 8 teams for the inaugural World Cup. Along with the six Test teams (South Africa were banned at this stage) they decided to include Sri Lanka and East Africa; the latter consisted of Kenya, Uganda, Tanzania, and Zambia.

The teams were divided into two groups, and the 12 matches were played on four days (June 7, 11, and 14). Though four matches started on the same day, the encounter between India and England at Lord’s is usually considered the first match; Madan Lal bowled the first ball in the history of the tournament to John Jameson.

Only three Indians — Srinivas Venkataraghavan (who played for Derbyshire), Bishan Bedi (Nottinghamshire), and Farokh Engineer (Lancashire) had serious experience in English domestic cricket; all three were included in the squad, but Bedi was surprisingly dropped at Lord’s as Venkat went in with five seamers. England had romped to 334 for 4, which was followed by one of the most bizarre performances: Sunil Gavaskar batted out all the entire 60 overs and scoring 36 not out off 174 balls with a solitary boundary. India lost by 202 runs.

On the same day, East Africa ran into Glenn Turner, who faced 201 balls for his 171 not out — then the highest ODI score. New Zealand reached 309 for 5, but to their credit, East Africa batted out the full 60 overs, finishing on 128 for 8. India and East Africa then moved to Headingley for their next match.

Headingley looked almost empty that day, and expectedly so. A mere 720 paid for admission (though there were Yorkshire members around). Harilal Shah batted on the flattest of tracks, but the East African progress was clogged by some tight bowling from Abid Ali and Madan Lal. Abid took two quick wickets, and brought back into the side, Bedi clean bowled a clueless Yunus Badat. The score read a mere 37 for three in the 23rd over.

With his impeccable accuracy, Venkat was almost impossible to score off, but Bedi was on another planet. The best Praful Mehta and Jawahir Shah could do was to occupy the crease. Scoring runs, however, was another matter. Runs came in a dreary crawl. Mehta’s run out eventually broke the stalemate, and Amarnath had Harilal caught-behind soon afterwards. The score read a sorry 56 for 5 in the 39th over.

Ramesh Sethi joined Jawahir, and the partnership (a “bright and cheery one”, to quote Wisden) resulted in some runs. They added 42, thanks to some fabulous cover-drives from Jawahir and “robust swinging shots to leg” from Sethi. They seemed to be on their way to bat out the full 60 overs, but a spell from Madan Lal put an end to their hopes. They lost their last 4 wickets for 4 runs and were bowled out for 120.

Madan Lal finished with 3 for 15, while Abid Ali’s 12 overs resulted in 2 for 22. Despite that it was Bedi who stole the show with unreal figures of 12-8-6-1: he was simply too good for the East Africans, who had never encountered bowling of such high quality. The Indian fielding was excellent, and Engineer did an outstanding job behind the stumps: he would be rewarded later for his exuberant performance.

The target was never going to challenge the Indians. Gavaskar and Engineer set about their jobs after a few tight overs from Frasat Ali. A debutant Don Pringle (father of Derek), then 43, had 3 overs before Harilal turned to his spinners. With the batting loaded up to No. 9, the batsmen played their strokes with abundance.

India reached their target in the 30th over with a boundary off Prabhu Nana’s left-arm spin. Gavaskar finished on 65 and Engineer on 54, but the latter was named Man of the Match — more because of his excellent wicketkeeping. It was the first ten-wicket victory in the history of ODIs, and also India’s first ODI win.

– A hundred from Keith Fletcher and some probing bowling from Tony Greig helped England beat New Zealand on the same day. Having won and lost a match each, India and New Zealand met at Old Trafford in a must-win encounter. Abid Ali took India to 230, but Glenn Turner’s sedate hundred — his second in three matches — knocked them out of the tournament.

– East Africa lost their third match as well. After England piled up 290 for 5, they succumbed to 94 against John Snow and Peter Lever at Edgbaston.

– East Africa never played as a team in the World Cup, and went on to be called East and Central Africa in 1989. Of the countries that formed East Africa, Kenya has been a constant feature in the World Cup, beating West Indies in 1996 and even making it to the semifinal in 1996.

– India did not win another match till they beat Pakistan at Quetta more than three years later. The Headingley match remained India’s only World Cup match win till 1983, when they astonished everyone by becoming the first side to beat West Indies in the tournament. They even lifted the Cup that year.

Man of the Match: Farokh Engineer. 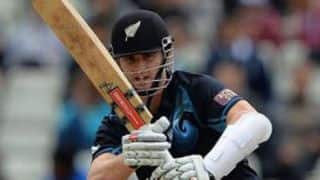